Lebanese Take to The Streets Over Proposed Budget Cuts

The Cabinet is set to meet Tuesday to begin discussing a draft austerity budget against the backdrop of planned street protests by retired military... 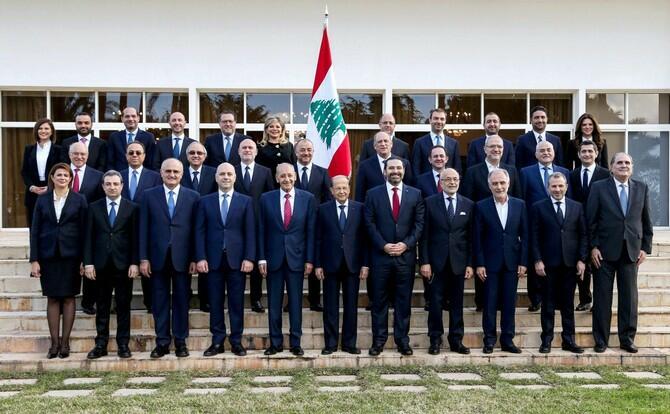 The Cabinet is set to meet Tuesday to begin discussing a draft austerity budget against the backdrop of planned street protests by retired military personnel and labor and teacher unions over proposed major cuts to end-of-service and social benefits.

President Michel Aoun is set to chair the Cabinet session at Baabda Palace, to be followed by another session Thursday and Friday, skipping Wednesday due to the Labor Day holiday, Youth and Sports Minister Mohammad Fneish told The Daily Star Monday.

Fneish, one of three Hezbollah ministers, declined to comment on the draft budget, which was distributed to ministers by the Finance Ministry last week, or the planned street protests.

“We will outline [Hezbollah’s] position on the draft budget in the Cabinet session,” he said.

Fneish added that the Cabinet session would begin with Finance Minister Ali Hasan Khalil expounding the broad lines of the 36-item draft budget designed to slash the deficit before the president, Prime Minister Saad Hariri and ministers began commenting on it.

Among other things, the Cabinet was expected to discuss cuts to end-of-service benefits to state employees and retired military personnel, a sensitive issue that threatens to trigger street protests.

The General Confederation of Lebanese Workers, the umbrella group of the country’s labor force, is also set to meet at 11 a.m. Tuesday to plan what its head said was “escalatory” action.

“The GCLW will meet tomorrow [Tuesday] to discuss escalatory measures against the draft budget that aims to take away the rights of state employees and military personnel,” GCLW head Bechara Asmar told The Daily Star.

Asmar said his union rejected the proposed austerity budget because it targeted civil servants and military personnel in their salaries and social benefits, while it ignored revenues from seafront state properties along the Lebanese coast, as well as tax and Customs tariff evasion, estimated at $4 billion annually.

“This amount is sufficient to reduce the budget deficit,” he said.

This comes as Lebanese military veterans are planning to stage street protests and sit-ins Tuesday around the Grand Serail, the Finance Ministry and the Central Bank and other areas to condemn the proposed cuts to their and end-of-service benefits, including school and medical aid.

“We will stage escalatory protests and lay siege to all government headquarters,” a retired army general told MTV.Retired Army Gen. George Nader said the military veterans wanted to send two messages to the government with their protests: that they rejected attempts to touch their rights and called on authorities to regain the “stolen money and put the thieves on trial.”

Khalil has submitted to Hariri a revised draft budget that contains austerity measures and reductions in all ministries’ spending in a bid to slash the deficit. Last year’s budget deficit was estimated to have stood at $6.7 billion, or 11 percent of gross domestic product, though the final figures have not been released.

Khalil has said that if the budget’s proposed austerity measures prove successful, the deficit-to-GDP ratio could be cut by 2.5 percent in 2019, to bring it down to 9 percent.

Reducing the deficit-to-GDP ratio, which reached 11 percent in 2018, by 1 percentage point every year over five years was one of the key pledges Lebanon made at the CEDRE conference in Paris last year.

Among other things, the draft budget calls for a three-year hiring freeze in the public sector, although with certain exceptions, and for a 50 percent cut in the remunerations of the president, the prime minister, ministers and MPs.

On the spending side, many capital spending projects will see their budgets slashed or eliminated; civil servants who get 16 monthly salaries per year will see that number reduced; those who receive salaries from multiple state bodies will have to downsize to just one; other extrasalary compensation will be limited; paid leave days will be cut from 20 to 15 days per year; early retirement will now come only with a hefty 25 percent fine on one’s pension; retired military personnel will see a 3 percent cut to their pensions; and high-ranking civil servants will have their salary capped at the same level as the president’s.

To raise more money, taxes on the highest-earning individuals and companies will be raised to 25 percent. Taxes on interest from banking deposits will also be raised from 7 to 10 percent.

Aoun was quoted as saying he would defend the “rights of military personnel” while discussing the draft budget at the Cabinet session.

Aoun will “take a position on the rights of military personnel of various sectors,” MP Jamil al-Sayyed said after meeting with Aoun Monday, according to a statement from the presidency.

Sayyed, who belongs to Hezbollah’s 13-member parliamentary bloc, is also a retired army general and had served as head of General Security. He strongly rejected cuts to the social benefits of military personnel.

“In my opinion, before touching the rights of civilian and military personnel, we should deal with the waste [of public funds], improve [tax] collection and increase revenues,” he said.

Lebanese Forces leader Samir Geagea also criticized the draft budget, saying it was “disappointing” because it fell short of facing “a dangerous economic and financial crisis.”

“The remedies mentioned in the draft budget are ordinary measures that cannot ensure the desired solution,” Geagea said in an interview with the Central News Agency. He questioned how topics such as the issue of seafront state property violations, “which can generate billions of dollars to the state Treasury,” and the role of banks and revenues from tax evasion could be ignored in the draft.

Commenting on the draft budget, MP Mohammad Raad, head of Hezbollah’s parliamentary Loyalty to the Resistance bloc, said: “We want a reduction of the budget deficit but within a reformist vision, and not only as an austerity vision that comes at the expense of employees with limited incomes.”

Slashing the budget deficit and enacting a string of key fiscal and economic reforms, including in the dysfunctional electricity sector, which is straining the state Treasury to the tune of $2 billion annually, are essential to unlock over $11 billion in soft loans and grants pledged at the CEDRE conference to finance investment and infrastructure projects in Lebanon.

The Cabinet discussion of the budget will set the stage for its final ratification by Parliament next month once it has been passed by the Cabinet.

Speaker Nabih Berri has said that the budget should be passed and sent to Parliament before May 31, when an extended spending measure expires.

In March, Parliament approved extending until the end of May an emergency spending facility in the Constitution known as the “provisional 12th.”