Protesters say they’d like to see power handed over to a transitional council made up of judges with no political affiliation until elections are...

Beirut, Lebanon – In downtown Beirut, thousands of Lebanese protesters gathered for the sixth day, despite sweeping economic reform measures announced by the prime minister a day earlier, calling for the government to resign.

Chants of “Peacefully! Peacefully! This is a peaceful revolution!” reverberated Lebanese capital’s Riyad al-Solh square a day after Prime Minister Saad al-Hariri announced package of reforms that included a 50-percent reduction in salary for politicians and the establishment of an anti-corruption panel.

Protesters say they’d like to see power handed over to a transitional council made up of judges with no political affiliation until elections are held.

Behind the square, which has been the centre of protests since Thursday, barbed wire blocked the path to the Grand Serail, the headquarters of the prime minister.

On the barbed wire, protesters hooked pieces of paper with messages scrawled: “We want to take back our money that was stolen” and “No for a sectarian system”, highlighting the anger against government corruption and sectarian political system.

Dima, a 19-year-old student told Al Jazeera that the public has lost trust in government officials and doesn’t expect the “thieves” to succumb to protesters’ demands so quickly.

The only way out is to change the system

“By the last week of the month, we’re usually broke,” Dima, who only identified by one name, said.

“[Hariri] gave us about 15-20 resolutions that could have been solved 10-20 years ago. Why did you give us them in three days?

“There’s no trust between us… what we want is for them to leave so we can have early elections,” she said.

Government plans to impose new taxes on tobacco, petrol and WhatsApp calls sparked the Mediterranean country’s biggest protests in years, spread from Beirut to the southern cities of Tripoli and Tyre.

The government hurriedly reversed its new tax proposals but public anger spilled on to the streets as people were already upset with austerity budget passed in July.

The demonstrations have unified Lebanon’s various sects, with Shia, Sunni, Christians and Druze protesting side-by-side faced with an economic collapse.

On Monday, al-Hariri announced a reform package in an attempt to quell the public anger. 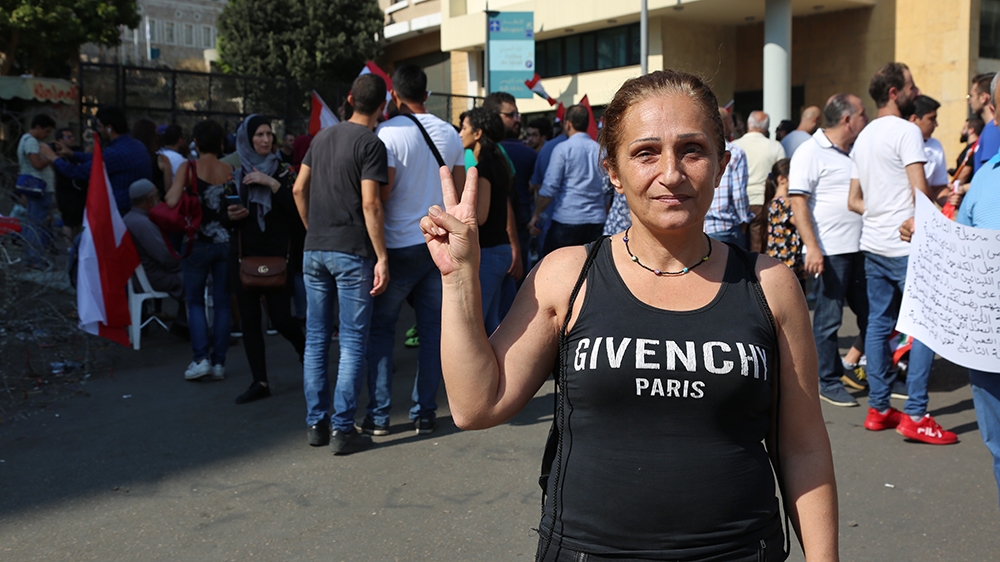 Among the list of reforms is a 50-percent reduction in the salaries of current and former officials, drafting a law that seeks to restore public funds and abolishing several state institutions.

It also asked the central bank and private banks to contribute $3.3bn to achieve a “near zero deficit” for the 2020 budget. At around $86bn, Lebanon’s public debt is more than 150 percent of gross domestic product.

But protesters say the proposed reform package does not address their concerns and they have lost all trust in their leaders.

“These are fake promises that the prime minister announced yesterday,” Hassan Ballout, 65, a taxi driver from southern Lebanon told Al Jazeera during the protests.

These are fake promises that the prime minister announced yesterday

“I don’t believe that what he promised will be done,” Ballout said, adding that the government has broken promises before.

However, Ramzieh Barakat, who has been protesting every day, told Al Jazeera that she took Hairiri’s announcement as a positive sign that the demonstrations can bring about change.

“Just being here on the street, continued demonstration will bring us closer to our rights.”

“The prime minister said he’ll enforce laws to track down people who stole money from government. With this he’s really confirming that this government was really stealing the money,” Barakat said.

An unemployed mother of four, Barakat said that it’s a struggle to get by in Lebanon and cannot pay her rent.

Her marketing business shut down five years ago due to the economic crisis, which has seen a cash-starved treasury and shutting down of welfare programmes.

She says that even if her three sons were all employed, they still wouldn’t be able to afford to pay the rent.

“Life is difficult. We are hungry. I’m not talking just about myself. My case is like that of 90 percent of all Lebanese,” Barakat said.

“We’re asking politicians to empathise with us. Everybody is unemployed. They need to mobilise the workforce.

“There’s no dignity. We’re fighting for the dignity of the people.”

Around 30 percent or 1.5 million people of Lebanon’s population lives in poverty, according to the UNDP

In a report titled “No country for poor men: How Lebanon’s debt has exacerbated inequality,” the Carnegic Middle East Centre noted that the richest one percent of Lebanon’s population claimed 25 percent of the total national income between 2005 and 2014.

In a report published on Monday, Lima Fakih, director of the Crisis and Conflict Division at Human Rights Watch, said that there is a “trust and accountability deficit” in Lebanon due to “the government’s perennial failure to hold officials and other perpetrators to account despite credible allegations of abuse and misconduct”.

A common message heard from all protesters is that the sectarian political system on which the government is based on is problematic as it creates patronage and clientalism.

The whole governmental structure they say, requires a major overhaul. The country’s cabinet and parliament are filled based on quota assigned to its various sects and religious groups.

“The only way out is to change the system. Changing politicians is not the issue,” Karim el-Horr, 39, a civil engineer, told Al Jazeera.

“Everyone knows who the thieves are, the politicians who are ripping the country from its resources, we all know them.”

The current coalition government headed by al-Hariri came to power in February almost eight months after the elections – a testament to the country’s divided politics.

For Dima, the protests are an opportunity to try to bring about change. She’s seen many of her friends and family move abroad for better opportunities.

“This is our home and we have the right to live here. No country will ever love us or embrace us the way Lebanon does,” Dima said.

“I love my country, I love this land but they’re not giving me a reason to stay anymore.”