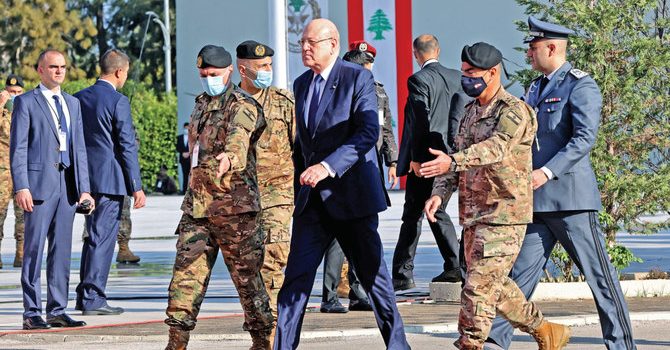 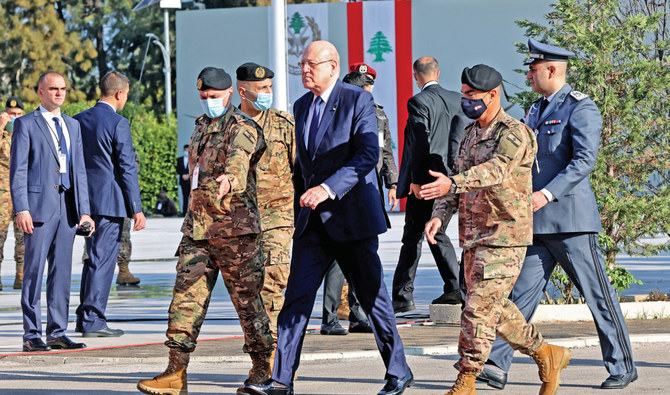 Mikati said that his joint phone call on Saturday with Saudi and French leaders was “an important step toward restoring historic brotherly relations with Riyadh.”

The statement reiterated demands that Lebanon should “implement comprehensive reforms, monitor borders, abide by the Taif Agreement, limit arms to the legitimate state institutions and not be a launching pad for any terrorist acts that destabilize the region (nor) a source of drug trafficking.”

Mikati also said: “I thank President Macron and Crown Prince Mohammed bin Salman for their keenness in maintaining the friendship toward Lebanon.”

Mikati called both President Michel Aoun and Parliament Speaker Nabih Berri and briefed them on the phone call.

Mikati’s media office said that Aoun and Berri “expressed their satisfaction and stressed their adherence to the best relations with Saudi Arabia and all brotherly Arab countries, especially the Gulf Cooperation Council countries.”

Mikati called “all parties in Lebanon to appreciate the sensitivity of the situation and circumstances and not to take any action or interfere in any matter that offends the Arab brothers and harms the Lebanese.”

He added: “It is time to commit again to the policy of disassociation and not to involve ourselves and our country in what has nothing to do with us.”

The Saudi position toward Lebanon left the Lebanese anxiously relieved about the extent of the seriousness of the ruling authority in implementing what was agreed on in Jeddah between French President Emmanuel Macron and Saudi Crown Prince Mohammed bin Salman.

Although Macron succeeded in opening the door to a solution to Lebanon’s diplomatic and economic crisis with Saudi Arabia, and thus the Gulf Cooperation Council countries, after the resignation of Information Minister George Kordahi from the government following his statements about the Kingdom, there is a fear that Hezbollah will continue to embroil Lebanon in regional politics.

However, MP Ali Darwish, who is from Prime Minister Mikati’s parliamentary bloc, expects “positive signs to emerge in the coming days.”

Darwish said that appointing a parliamentary committee to try presidents, ministers and MPs in return for allowing Cabinet sessions to take place was “one of the proposals.”

Darwish told Arab News that “the Saudi-French move has undoubtedly breached the wall of stalemate in Lebanon’s relationship with the Gulf, which Lebanon is keen to be extremely good in the midst of the conflict in the region.”

On the implementation of the French-Saudi statement, Darwish said: “The reforms are contained in the ministerial statement of Prime Minister Mikati’s government, and they are his government’s agenda, and he is striving to achieve them.”

Darwish said that the Mikati government would “never interfere in the judicial matter, as there is a separation of powers.”

However, he indicated that activating the Parliamentary Council for the Trial of Presidents and Ministers was possible but it required steps to be taken by parliament.

Darwish added: “However, the trade-off between this matter and any other matter, especially the dismissal of the governor of the Banque du Liban, is not on the table.”

Darwish said that Mikati’s concern “is securing the livelihood of the Lebanese people in light of the current severe economic crisis.”

He said work was “now focused on rounding the corners and bringing the views closer.”