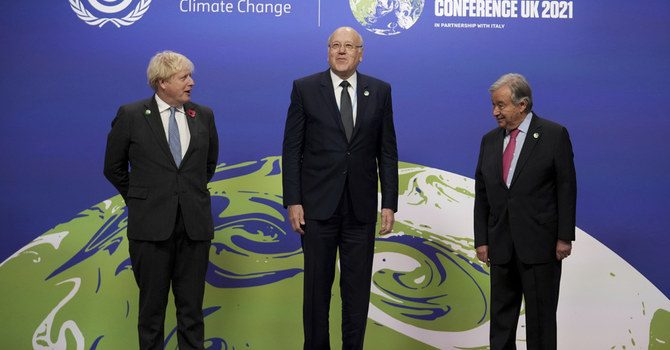 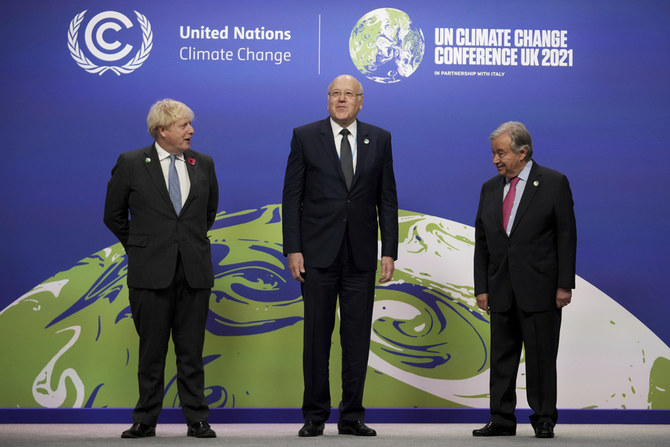 BEIRUT: Lebanese Prime Minister Najib Mikati visited Saudi Arabia’s pavilion at the UN Climate Change Conference, amid attempts to ease the diplomatic and economic fallout triggered by a government minister’s remarks on the war in Yemen.

Mikati was received at the pavilion by the Kingdom’s ambassador to the UK, Prince Khalid bin Bandar Al-Saud, who explained his country’s vision for the environment, a green economy, and climate change.

Lebanese Information Minister George Kordahi has caused anger by saying the Iran-backed Houthis were defending themselves in Yemen and that the war should stop.

Gulf states, led by Saudi Arabia, have recalled their ambassadors from Lebanon and also instructed Lebanon’s ambassadors to leave.

Kordahi has not quit despite a request from Mikati, and his refusal to resign has the backing of Hezbollah and the Marada Movement.

A delegation of economic bodies met Lebanon’s Maronite Patriarch Bechara Al-Rahi on Tuesday to express their concern about the damage being done to the country and its people.

The secretary-general of the economic bodies, Nicolas Chammas, said: “We condemn all that is happening today between Lebanon and the Arab countries, especially Saudi Arabia. The Kingdom has been the leader of the Gulf Cooperation Council for the past 70 years. The Kingdom and Arab Gulf countries have always supported Lebanon at the political, social, humanitarian, financial, and economic levels, especially during the civil war and post-civil war eras.

“As economists, we were appalled by the setbacks happening today, for the Kingdom is the primary employer of the Lebanese in the Gulf and elsewhere, and is the primary importer from Lebanon. It is also the primary investor. This means that any setback will have severe repercussions on the country, and we should not forget that we heavily rely on the Kingdom regarding voting inside the IMF to retrieve Lebanon out of this crisis.”

He warned that thousands of families would be directly affected by the crisis as there were factories in Lebanon that were dependent on the Kingdom and the Arabian Gulf for imports of raw materials, which had already stopped.

The head of economic bodies, Mohammed Choukair, said there was no progress on the political track to resolve the crisis.

He expressed regret that Lebanese President Michel Aoun was distancing himself from the issue and was in “full acquiescence.”

The damaged relations with the Gulf come as Lebanon tries to climb out of its economic and financial difficulties.

During a meeting with Mikati, US Secretary of State Antony Blinken reiterated that Washington would “continue to support the efforts of the Lebanese government to re-establish stability and achieve economic recovery, and the negotiations with the International Monetary Fund until the next parliamentary elections.”

Leaked information said that all those who met Mikati expressed their opposition to his government’s resignation so that it could “achieve what is required from it in getting the country out of its economic and financial predicament.”