In an attempt to shake the conditions of rising extremist authoritarianism in Lebanon, a free concert organised by independent activist groups and individuals took... 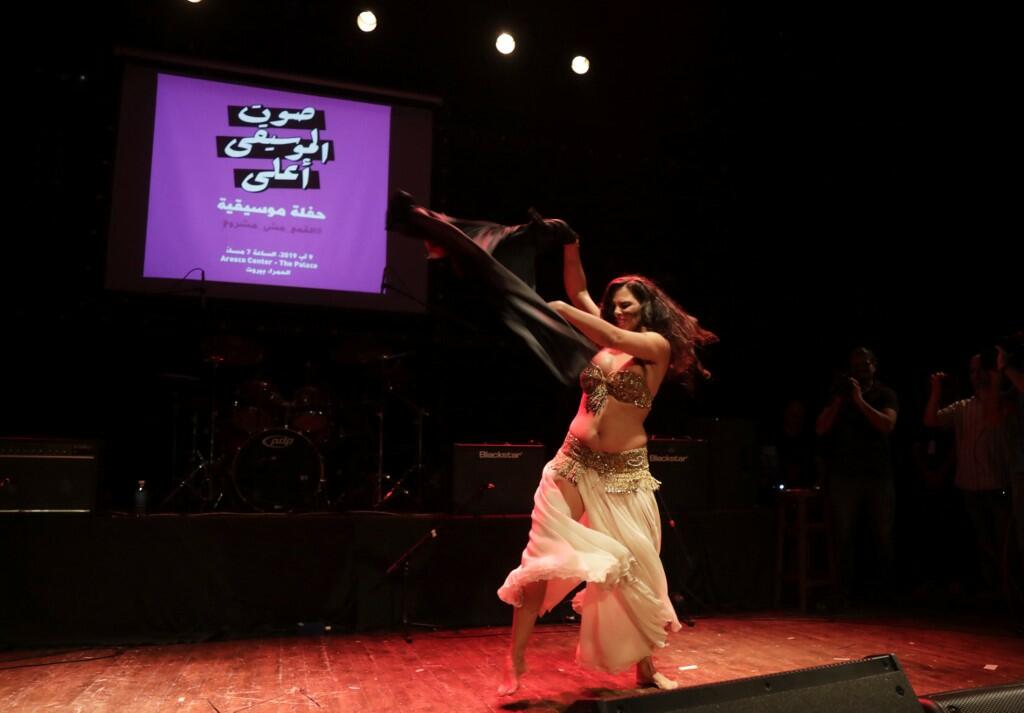 In an attempt to shake the conditions of rising extremist authoritarianism in Lebanon, a free concert organised by independent activist groups and individuals took place on Friday.

Titled “The Sound of Music is Higher”, the largely youth-based grassroots event in Hamra followed the cancellation of Mashrou’ Leila’s concert by Byblos International Festival due to recurrent requests by religious institutions.

These requests were further accompanied by numerous threats made on social media and elsewhere by different Christian fundamentalist groups.

From the perspective of the audience, the concert was not only a chance to publically listen to songs deemed forbidden and punishable, but also an opportunity to meet with like-minded people interested to see a more open and inclusive Lebanon.

On that basis, the organisers opened up with a speech which clearly outlined the political discourse spanning the concert, one in open opposition to the what they call “the discourse of hate” against “diversity”, in a country once considered to be an open and liberal space.

The concert did not only play Mashrou’ Leila’s music, but also involved other artists and music enthusiasts hoping to express their solidarity and engage in the conversation.

The concert’s music programming organiser Roy Dib sums this up: “We hoped to represent a diverse set of artists, ranging from rap to indie to rock to those creating their own music.”

In addition, breaks between one artist and another were utilised to give a platform and space for stand-up comedians scorning the desperate political realities of the country.

“The comedy scene satirizes some political events in the country because comedy observes and reacts,” said comedian and performer Nour Hajjar.

Mashrou’ Leila has been subject to many attacks reacting to so-called ‘blasphemy’ in their lyrics and the sexual orientation of their lead singer.

The relationship between the art scene and politics is complex and in constant contradiction.

On one hand, artists in Lebanon are encouraged, socially and politically, to act as a cover used to glorify members of the political class and their ideas.

On another hand, there is a genuine fear among designers and artists to make use of their work to launch a “creative opposition”.

This is particularly due to the fact that the security apparatus of the state has been interrogating many activists over statements made on social media for the past two years.

In opposition to attempts to neutralise art in Lebanon, the event’s communication organizer Farah Nourreddeen suggests that “there is no merge between the art scene and the activist scene. They are both one and the same”.

With 4,000 individuals and supporters filling the room in solidarity, what happened in the middle of Beirut has been largely perceived as a new cultural movement that is breaking societal boundaries and imposing unimaginable conditions on structures of authority.

“We were surprised to witness a campaign of fabrication that hits freedom of expression,” said Mashrou’ Leila in their straight-forward statement while reacting to the constant societal abuse and lack of state protection.

The band has been subject to many attacks reacting to so-called “blasphemy” in their lyrics and the sexual orientation of their lead singer.

After the Maronite Catholic Eparchy of Byblos requested that the band’s show, which was supposed to take place on August 9, be cancelled, a nation-wide debate between religious institutions and activists has arisen.

Fearing a violent reaction to the band playing in the festival, and warnings by state security that the latter will not be responsible for what occurs, the concerned Festival committee decided to cancel the concert.

The Festival demanded that “the Lebanese State acts to ensure that Mashrou’ Leila’s and all other artists’ expression stands as an inalienable right, for freedom is first and foremost freedom from fear.”

Commenting on the role of religious institutions in this cancellation, activist and civil society organizer Tariq Serhan believes that “this incident is another example of ground gained by religious authorities, which is an extension of the political ruling class.”

The rise of a new cultural movement

Statements of opposition on social media and press conferences by renowned music personalities such as Haifa Wehbe and Marcel Khalife gained significant recognition.

“I cherish my humanity and respect different among people, whether related to their culture, religious or general beliefs,” tweeted Lebanon’s famous pop star Haifa Wehbe in response to the threats and cancellation.

However, the country is currently witnessing the rise of different youth groups spearheading the campaign in face of the many societal pressures surrounding them following the incident.

Starting with a solidarity demonstration in Samir Kassir Square which took place on July 29, online and offline opposition to the on-going threats and harassment has since then escalated.

“In this case, similar to countless others, religious figures and institutions are interfering in our lives and public affairs,” says a member of the AUB Secular Club in a solidarity video.

In that same video, members of the club asserted that the rising authoritarianism in Lebanon has had a strong effect on marginalised communities such as refugees and the LGBTQ community.

After that, activists who belong to different student and non-student groups were reincorporated into one organisational table which decided on the format, style, and most importantly, political message which introduced the concert and its purpose.

This message was demonstrated by a press conference which took place two days prior to the concert, in which youth and student activist Joumana Talhouk emphasised that “this campaign has accomplished the cancellation of a concert with the weapon of violence. This campaign succeeded in killing diversity and silencing all who is different.”

She then concluded her speech while reiterating the concert’s purpose: “As a response, this concert is taking place to say that the sound of music is higher and suppression is not acceptable.”