Learning With: ‘What’s Wrong With This Diorama? You Can Read All About It’

Before reading the article: What do you know about the relations between the Dutch settlers and Indigenous people in the 17th century? Where did... 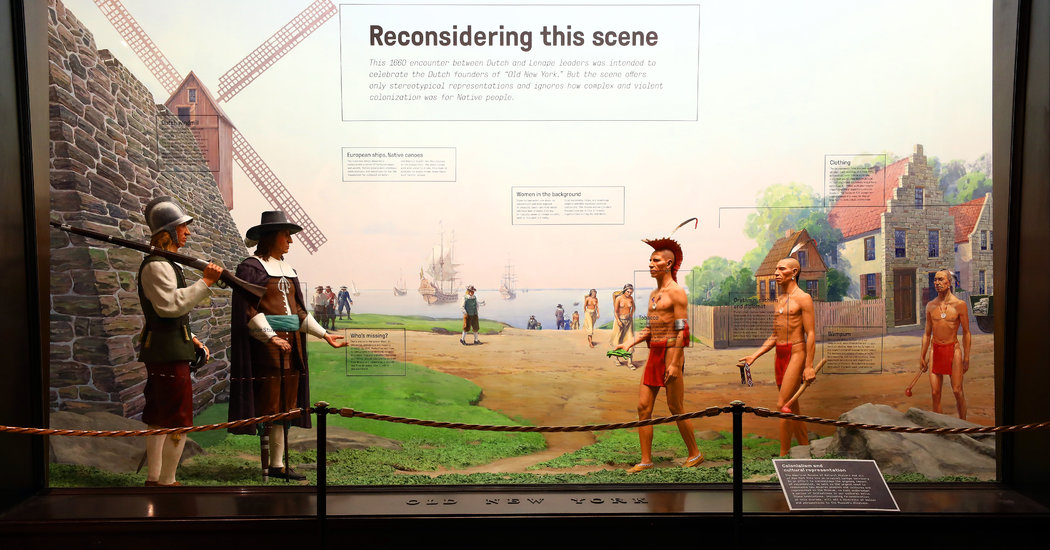 Before reading the article:

What do you know about the relations between the Dutch settlers and Indigenous people in the 17th century?

Where did you learn this information? In schools? Museums? Textbooks? Pop culture? Family and friends?

How accurate do you think your knowledge and understanding is?

Next, look closely at the photographs of this diorama (from before the exhibit was altered) from the American Museum of Natural History in New York depicting Dutch settlers and an Indigenous tribe.

• What do you notice?

• What do you wonder?

• What story does the diorama tell?

• How historically accurate is the diorama?

• What is missing from it?

• What biases do you detect in its representation of the past?

Now, read the article, “What’s Wrong With This Diorama? You Can Read All About It,” and answer the following questions:

1. In the opening paragraph, Ana Fota, the author, writes that the diorama was “intended to show a diplomatic negotiation between the two groups, but the portrayal tells a different story.” What does the author mean by this?

2. What year was the diorama created? Bradley Pecore, a visual historian, says the diorama is “filled with historical inaccuracies and clichés of Native representation.” Why does he believe that makes a difference so many years later?

3. Faced with the problem of inaccuracies, what solutions did the museum consider? How did it ultimately address the problem?

4. The article details many historical inaccuracies in the original diorama. Give three examples. Which do you find most egregious or significant?

5. Why was it important to Mr. Pecore that the revised diorama and updated exhibit address the question of present-day Indigenous people? What stereotypes does he believe are still prevalent in museums across the country?

6. What prompted the museum to reassess the issues of representation in the decades-old diorama?

7. Lisa Gugenheim, a senior vice president at the museum, said:

We’re revealing the making of the cake and not just the end of the process. We’re inviting visitors to imagine themselves, why did we feel the need to update it? And of course that applies to teachers and kids, too.

What has been the reaction of visitors to the revised diorama? How does it meet Ms. Gugenheim’s goal of creating an opportunity for dialogue?

Finally, tell us more about what you think:

— What do you think of the American Museum of Natural History’s choice to keep the original diorama intact and add 10 labels with new information rather than revising or completely removing the exhibit? Should all museums follow suit and amend their exhibits of Indigenous people if they are determined to be inaccurate?

— Return to your observations and analysis of the diorama from the top. How has your understanding of the diorama changed? Does the article change how you understand early American history — specifically between European and Native American populations?

— Critics of the original diorama said it depicted “cultural hierarchy, not a cultural exchange.” Why do you think the issue of cultural representation matters? What connections do you see between the diorama and the ongoing Confederate statue controversy? How might the museum’s remedy be applicable to that issue?

— Ms. Fota writes, “The solution offers a lesson in the changing nature of history itself. And it’s written on the glass.” Do you agree? What does this story of this exhibit reveal about the nature of history? Who writes history for whom and why? Can there ever be an objective or true history? Or is all history written from a particular viewpoint, and therefore biased and incomplete?