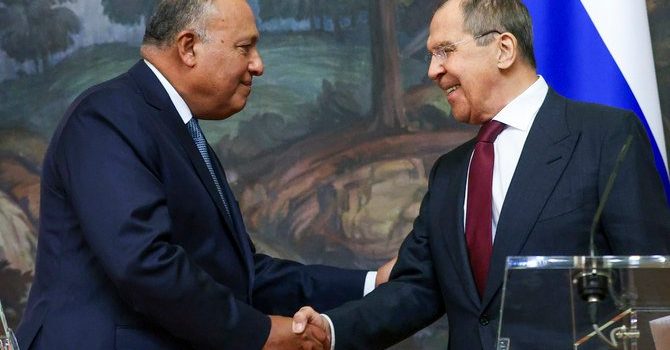 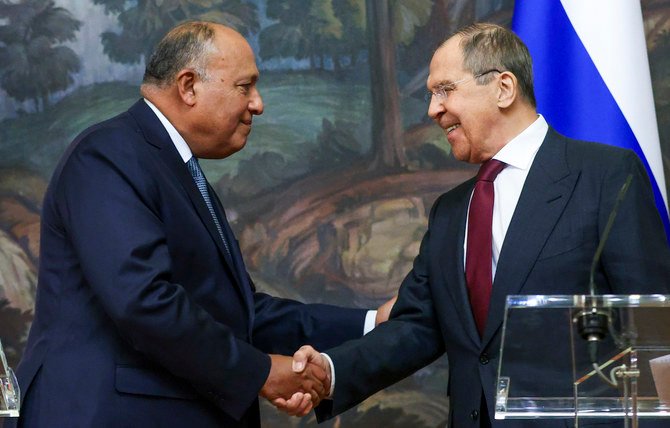 CAIRO: Egyptian Foreign Minister Sameh Shoukry and his Russian counterpart, Sergey Lavrov, have discussed developments in several regional issues, including the Renaissance Dam project and the crises in Libya and Syria, at a meeting in Moscow.

Shoukry said the talks covered efforts to end the Palestinian-Israeli conflict and strengthening the two-state solution, and sponsoring all means to reach a permanent, comprehensive and just solution to the Palestinian issue that guarantees the establishment of an independent Palestinian state on the 1967 borders, with East Jerusalem as its capital.

“I thank Russia for the support that Egypt has received from its side to address this issue in the (UN) Security Council, and we look forward to cooperating with Moscow on this issue, and reaching a binding legal solution that guarantees the rights of all parties, away from any unilateral policies inconsistent with the policies of international law,” Shoukry said during a press conference with Lavrov in the Russian capital.

“We will continue to closely coordinate on this matter, including the issue of Palestinian national reconciliation, in which Egypt plays the main role in order to achieve Palestinian unity, in addition to working to fulfill the interests of the brotherly Palestinian people,” Shoukry said.

He expressed his appreciation for the ministerial meetings between Cairo and Moscow and the holding of the joint commercial committee to promote the common interests of both parties, whether in the Dabaa nuclear plant or in promoting tourism.

“We look forward to continuing work to activate all these areas, and for the return of trade exchange to its levels, which was affected by the pandemic, but there is still fruitful cooperation as well as searching for more areas that strengthen relations,” Shoukry continued.

Shoukry added that he and his Russian counterpart discussed ways to maintain stability and territorial integrity in Libya. The foreign minister said they covered activating the plan approved during the meetings of the Libyan National Forum, the importance of holding presidential and legislative elections on Dec. 24, and the need to maintain a ceasefire and the exit of all foreign forces from Libyan territory.

Shoukry said that he briefed his Russian counterpart on the latest developments regarding the Renaissance Dam issue against the background of the presidential statement issued by the UN Security Council, expressing his thanks to Moscow for the support that Egypt received in addressing this issue with the UNSC.

Shoukry expressed his aspiration to continue cooperation between the two countries — given the existential nature of this issue for the future of Egypt — and the importance of urgently reaching an agreement through the presidency of the African Union.

The ministers also discussed the crisis in Syria and possible solutions that align with the decisions of international legitimacy.

Shoukry said: “With regard to my meeting with Syrian Foreign Minister Faisal Miqdad on the sidelines of the UN General Assembly in New York, it was important for this meeting to take place in light of what the Syrian crisis has reached,” stressing Egypt’s keenness to help Syria out of its crisis.

The ministers also discussed the crisis in Syria and possible solutions that align with the decisions of international legitimacy.

He said that Egypt will work with Syria to take measures that preserve the security and territorial integrity of the country.

“We await the measures that the Syrian government may take within the framework of the political solution in Syria, as well as activating the course of the constitutional committee’s discussions and taking into account the humanitarian situation in Syria to alleviate the suffering of the Syrian people and meet their needs.”

Lavrov stressed the need to provide aid to the Syrians to overcome the repercussions of the decade-long crisis, and work to reach a political settlement on the basis of UNSC resolutions.

Lavrov added that the terror threat in the Idlib region remains high, and that the terrorist groups stationed there are attacking the units of the Syrian army as well as Russian forces.