12:15 AM ET LAS VEGAS — Kyle Kuzma was fast asleep in a Shanghai hotel when his manager woke him up in the middle... 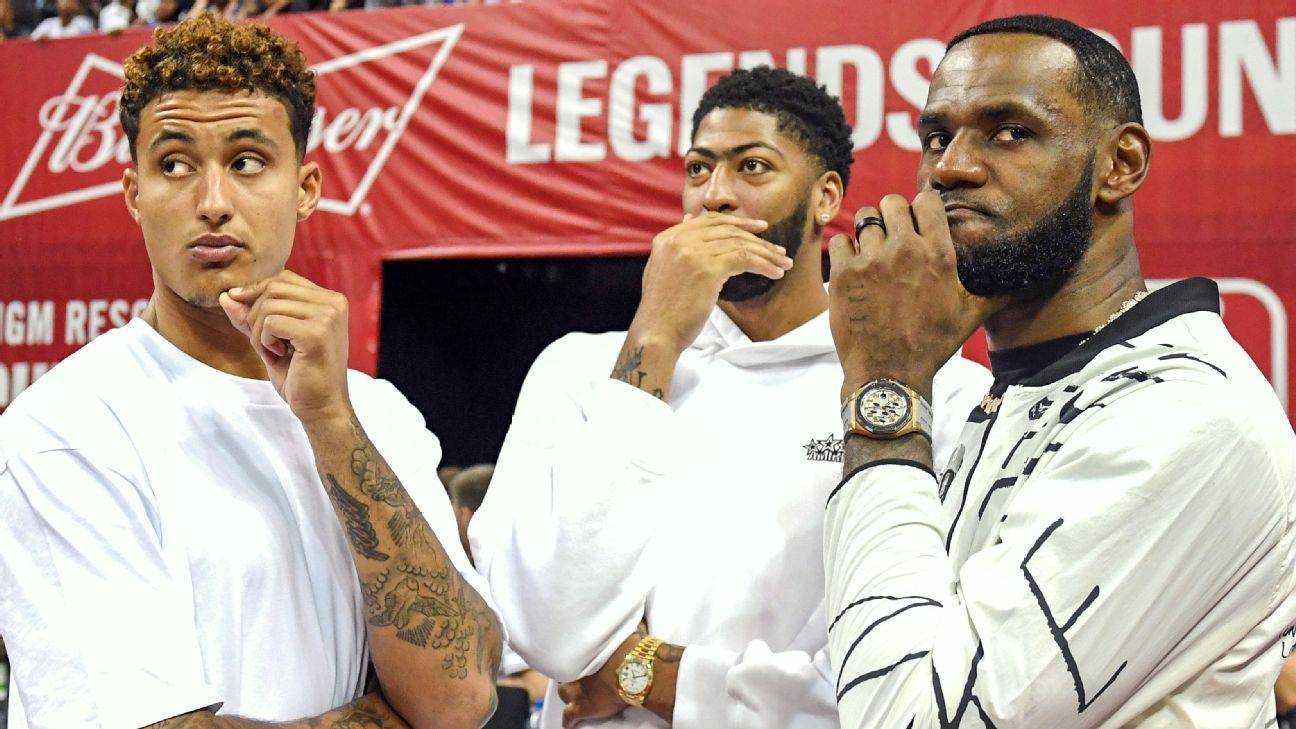 LAS VEGAS — Kyle Kuzma was fast asleep in a Shanghai hotel when his manager woke him up in the middle of the night to tell him the Los Angeles Lakers had traded for Anthony Davis. In a blockbuster trade, Lonzo Ball, Brandon Ingram and Josh Hart — once considered the future of the Lakers — were dealt to New Orleans for the Pelicans’ All-Star big man in June.

“I don’t feel no pressure, but I believe that I am capable of being that superstar,” Kuzma told ESPN. “I put in a lot of work in. My progress through my journey shows that I can be there. I developed every single year, dating back to college, and I don’t see that development stunting at all.”

Kuzma added, “Last year I didn’t shoot the ball well, and I still averaged almost 20 [points per game]. If I can shoot the ball well and keep developing the facets of my game defensively, I don’t see why I can’t [be that third star].”

From making it out of the tough environment of Flint, Michigan, to becoming a little-known late-first-round pick out of Utah, Kuzma noted how he has continually beaten the odds and exceeded expectations.

Currently on the USA Basketball training camp roster, the 24-year-old hopes to launch himself into the biggest season of his basketball career by making the U.S. team and playing in next month’s FIBA World Cup. It’s a big summer for the third-year forward, who averaged 18.7 points and 5.5 rebounds last season. Kuzma, who saw his 3-point shooting dip from 36.6% as a rookie to 30.3% last season, believes he fits in seamlessly alongside James and Davis.

“I’ve never been a ball-dominant guy,” Kuzma said. “I’ve always played off the ball. It is going to be a little bit easier, going to have a lot of open shots. It is my job to trust my summer workouts and what I’ve done. Just breathe, focus and knock those shots down, because I’m going to be open.”

The Lakers once envisioned Kuzma drilling perimeter shots off passes from Ball and Ingram. That ended in June, with Kuzma learning of the trade from his manager, Vin Sparacio, half a world away while in Shanghai for business.

“It’s like 3 a.m., I’m asleep, he ran into my room and damn near threw water on me,” Kuzma said. “For those guys, especially speaking of Zo, BI, they are best when they have the ball in their hands. It is kind of tough when we get vets that are ball-dominant guys. So it kind of stunted their growth.”

Now, Kuzma sees Ingram and Ball — the No. 2 overall picks in 2016 and 2017, respectively, by the Lakers — thriving and being able to play the way they need to in New Orleans alongside Zion Williamson.

“They were excited,” Kuzma said of Ingram, Ball and Hart after the trade. “It’s a little bit less pressure. They didn’t [actually] say that. But obviously being in L.A., there’s more pressure. They can be themselves now. They can go to New Orleans and develop into the superstars they were supposed to be.”

Shortly after Kuzma learned about the Davis trade, he texted Ingram, Ball and Hart in the group chat they have. It wasn’t long ago that all four used to roast one another with jokes about what each was wearing or their appearances.

They’ve since outgrown the roasting. But they haven’t grown apart despite now being on different teams.

“Really, they told all of us,” Kuzma said of the Lakers not wanting to part with their former first-round picks. “They didn’t want to trade none of us, obviously. We were a great young group of guys that had a lot of promise. Anytime you got three, four young guys as a core in the NBA, you don’t want to trade those guys. But you have an opportunity to get a generational talent, stuff is bound to happen.”

Kuzma added, “I thought that we made some growth over the two years together. Obviously a lot of people didn’t necessarily see it because of injuries — BI, Zo not really playing a lot of games over the past two years. But when we played together and we were on the court together, good things happened.”

USA notes: Marcus Smart did not practice and is out the rest of the week due to a left thigh strain. The Boston Celtics guard will be evaluated next week when Team USA is in Los Angeles. … Memphis power forward Jaren Jackson Jr., who is on the men’s select team, had his right leg looked at toward the end of practice. “I thought I did something but I didn’t,” Jackson said. “I just had to check it with [the team physician]. It’s fine.”