On Sunday morning, La Liga inaugurated a football tournament in Zaatari camp to celebrate the launch of its socioeconomic program. La Liga is the... 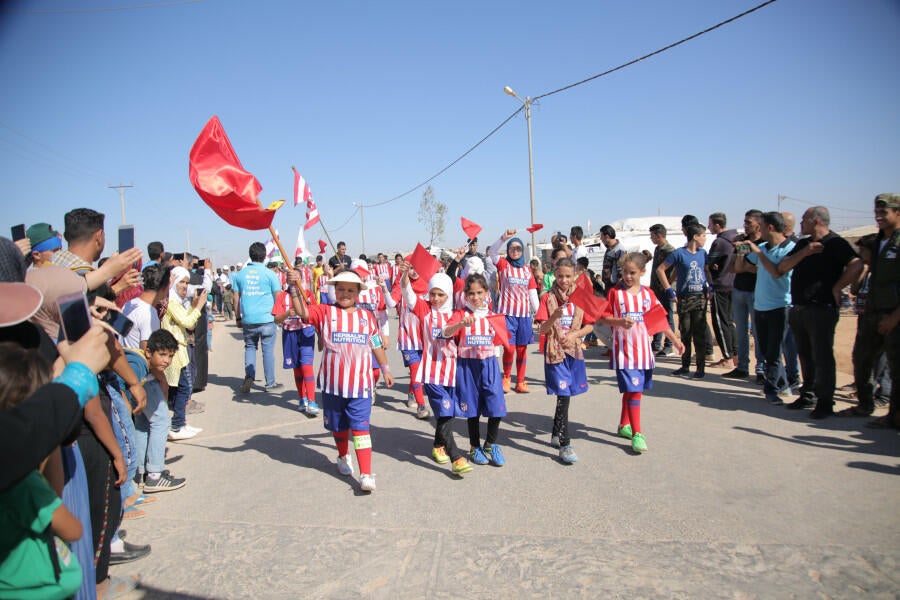 On Sunday morning, La Liga inaugurated a football tournament in Zaatari camp to celebrate the launch of its socioeconomic program.

La Liga is the men’s top football division in the Spanish football league system. Over the course of the last year and in collaboration with the Asian Football Development Project (AFDP), La Liga has developed the La Liga Zaatari Social Project in the camp.

The project will use football for “the purpose of improving the quality of life of the inhabitants of Zaatari, with special emphasis on the children living in the camp”, according to the project’s statement.

“Football is more than just a game and we have seen in Zaatari how playing football can truly help children overcome barriers. We look forward to working with La Liga as they help young refugees not only build their footballing skills but also rebuild their confidence,” HRH Prince Ali, founder of AFDP Global, said in the statement.

Zaatari camp, some 90km northeast of Amman, was built in July 2012, and over time has grown to become the world’s largest camp for Syrian refugees. According to the latest numbers from the UNHCR, 77,447 people live in the camp, and more than half of them are minors.

Thirty-three Spanish football clubs have collaborated on the project and donated sports equipment. Sanz, who is also a retired footballer who played for Real Madrid and Málaga CF, told The Jordan Times that “the children will really profit from the competition. They want to be the next star of La Liga. And I also think we can maybe find the next Lionel Messi here”.

Javier García and Izzat Jandali, two La Liga technicians, began working in the camp about a year ago to train children and their coaches. Training sessions also use “techniques employed to help participants manage their emotions and improve their ability to concentrate”, the statement said, adding that many refugees in the camp have fled the violence of Syria’s civil war and lived without running water or stable power.

According to La Liga’s statement, more than 750 children have participated directly in this program until now.

“Football has the power to shape characters and teaches children about the values of teamwork and the importance of taking on responsibility,” Prince Ali emphasized at the inauguration.