Kushner Says Deal of Century is an Outline for Peace 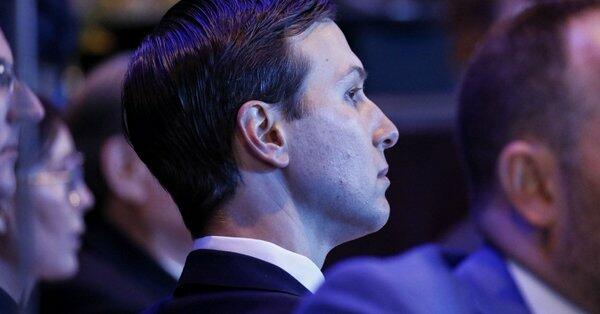 Senior White House Adviser Jared Kushner said Thursday night the Trump administration’s peace proposal was an “in-depth operational document” that would serve as a “starting point” to resolve the Israeli-Palestinian conflict, and indicated he was open to discussing Israeli annexation of parts of the West Bank.

Speaking at the Washington Institute for Near East Affairs, Kushner said his boss and father-in-law President Donald Trump had yet to see the latest version of the plan, which he described in only vague terms ahead of its expected rollout next month.

“What we’ve put together over the last year is more of an in-depth operational document that shows what we think is possible,” Kushner told Washington Institute’s Executive Director Robert Satloff in an open interview.

He said the plan would lay out “a solution that we believe is a good starting point for the political issues and then an outline for what can be done to help these people start living a better life.”

While Kushner and his subordinates have assiduously avoided providing details about their plan, the 36-year-old White House official said the plan would be highly specific.

“I think what we’ve put together is a document that I do believe addresses some of these issues in a very detailed way,” he said, “probably in a more detailed way than has ever been done before.”

Kushner said that Trump has been engaged in the peacemaking process, that he’s read elements of the proposal, but that he’s not yet looked over the most current version.

“The president has been involved from the very beginning,” Kushner said. “He hasn’t seen the latest draft.”

Later, he added that Trump, “has read a lot of the parts of it.”

Kushner, who had no diplomatic experience before entering the White House, was tasked in 2017 with brokering a deal that has frustrated countless diplomats and public policy experts for decades.

Last week he said past attempts at brokering a deal had “failed,” signaling a different approach, and on Thursday he echoed Trump’s Mideast Peace Envoy Jason Greenblatt by defending the administration’s decision to shy away from backing a two-state solution, a mainstay of American policy for decades.

Recent reports have said that the administration is preparing to offer a peace deal that would not include the establishment of a Palestinian state, which would be a non-starter for not only the Palestinian Authority but the rest of the Arab world and international community.

Kushner did not discount the move when asked about it, but advised both sides to keep from unilateral moves at least until after the plan is released. He said he would discuss it with Netanyahu once the prime minister manages to form a governing coalition, widely expected to be made up of right-wing parties that support Israeli expansion in the West Bank, territory the Palestinians want for a future state.

“I have not discussed this with the prime minister. Once there is a government formed, we’ll start engaging on this process and we’ll have a discussion. I hope both sides will take a real look — the Israeli side, the Palestinian side — before any unilateral steps are made.”

Netanyahu has in the past described Israel’s hold on some parts of the West Bank as a strategic necessity and Kushner emphasized that any demands made of Israel would not render the nation militarily vulnerable.

“I don’t think anyone would question, if we do ask Israel to make compromises in our proposal, that we’re going to ask them to do things that would put them at risk security wise,” he said. “I don’t think the president would take decisions himself that would put America and the people he represents at risk and he wouldn’t expect another leader to do that.”

Trump has been criticized by Palestinian Authority President Mahmoud Abbas as favoring Israel and delegitimizing himself as a mediator of any peace talks. Over the last three years, the president has moved the US embassy to Israel, cut aid to the Palestinians and United Nations Agencies that support the West Bank and Gaza and recalled the Palestinian envoy to Washington.

In response, the Palestinians have refused to engage with Washington on diplomatic issues, and have dismissed the administration’s plan.

Kushner suggested on Thursday that Palestinian officials who have criticized the Trump administration’s approach were looking to maintain the current situation.

“You have a lot of people who have been in charge of trying to solve it for a long time and they have a perfect track record of not achieving a solution, and maybe they like it that way,” he said. “I see them attacking the deal. They don’t even know what’s in it yet. And that shows that maybe they want the status quo.”

The rollout of the plan has been repeatedly delayed for various reasons. Kushner said last month that the proposal would not be made public until after Israel forms a new government and the end of the Muslim holy month of Ramadan, which would put it at early June or later.

On Wednesday, Greenblatt tweeted that the administration would release the plan “when the timing is right.”