Kurdish Militia in Syria Likely to Join with Assad, Putin

US plans to depart as Ankara is seen preparing to clear border area of ‘terrorist’ forces Kurdish forces in Syria will likely seek an... 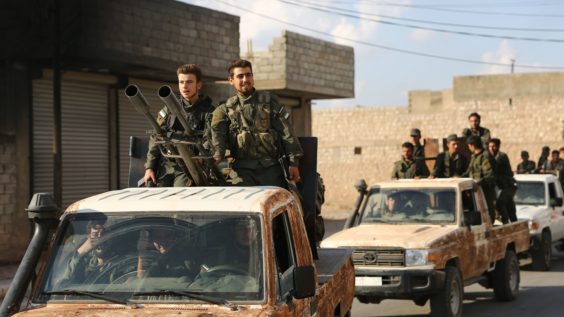 Kurdish forces in Syria will likely seek an alliance with Moscow and Damascus after the United States announced a looming Turkish incursion into Syria, analysts have told The Media Line.

A statement from the White House after President Donald Trump spoke with Turkish President Recep Tayyip Erdogan on Sunday night revealed that Turkey “will soon be moving forward.”

Ankara sees the Kurdish YPG militia in Syria as connected to the PKK, a Turkey-based Kurdish militia it has declared a terrorist organization. Both Washington and the European Union have also classified the PKK as a terrorist group.

Turkey has long complained about Washington’s alliance with Kurdish forces in northern Syria who have been integral in fighting against Islamic State. The Turks view them as a security threat and want them removed from the area close to the frontier.

The YPG, already weakened after the US got it to remove its defensive positions along the Syrian border, will be in search of an ally to replace the US in order to support its logistical needs. There are fears that with Kurdish forces now having to face an attack by Turkey without American help, ISIS could remerge.

Brett McGurk, the former US special envoy to the global coalition to defeat ISIS,   tweeted after the US announcement that Turkey cannot and does not want to deal with tens of thousands of people detained in camps in Syria, where people are at risk of radicalization, something that would lead to a resurgent ISIS.

“Believing otherwise is a reckless gamble with our national security,” McGurk wrote.

Nicholas Danforth, a visiting fellow at the German Marshall Fund in Turkey, told The Media Line that the most likely result of the announcement is that the Kurdish forces will cut a deal with Syria’s Bashar al-Assad and his ally, Russia. This means, he said, that Kurdish forces will give up some autonomy to Assad, and territory to Turkey.

The White House statement added that the US would not support the Turkish operation and its forces would “no longer be in the immediate area.”

The Reuters news agency cited a US official who said the initial withdrawal would be limited to an area close to the Turkish border.

“Russia and Iran will be excited to see the United States leave. They will be less excited about seeing Turkey come in,” Danforth stated.

Muzaffer Senel, an assistant professor of political science and international relations at Istanbul’s Şehir University, agreed that Kurdish forces would try to find a new alliance by going to Moscow and Tehran following a withdrawal of the US and an incursion by Turkey.

“The policy shift of Washington will most probably be welcomed by Russia and Iran,” Senel told The Media Line. “It’s a chance for them to take all of Syria under their control.”

Analysts state that Ankara’s most pressing fear is further attempts at self-rule for Kurdish groups within Turkey if Kurdish groups are allowed to develop an independent state within Syria.

“[It’s] a historical fear of disintegration… still very much alive in the minds of Turkish policy-makers,” Senel stated.

Danforth added that Assad, keen on regaining control over all of Syria, will likely put greater pressure on Turkey if it gains ground in the country. This could mean more Russian-backed attacks on northwestern Syria, including in Idlib province, where millions of displaced Syrians live and Turkey maintains observation posts.

A Turkish report of the Trump-Erdogan phone call issued before the White House released its statement said a safe zone was needed for “neutralizing the threat stemming from PKK-YPG terrorists.”

The report also stated that Turkey “will take all necessary precautions” to fight terrorism and that Erdogan “shared with President Trump his frustration over the US military and security bureaucracy’s failure to implement the agreement between their two nations.”

In August, Ankara and Washington came to a limited agreement over the establishment of a safe zone in northeastern Syria, but Turkey began to complain that the US was stalling over its implementation and threatened to go into Syria on its own.

A major defeat for Erdogan’s party in a June election for mayor of Istanbul was partly blamed on residents’ resentment toward the 3.6 million Syrian refugees living in Turkey.

Senel, the Şehir University assistant professor, stated that Turkey would face major obstacles in unilaterally setting up a safe zone and dealing with ISIS fighters. The obstacles would include the financial costs, as Turkey is currently mired in an economic crisis.

“It will be difficult times for Turkey,” he said.

Danforth stated that Turkey would need to take steps to deal with captured ISIS fighters, although no one knows what those would need to be.