Kurdish-led Fighters in Syria Fights Back on Syrian Border

CEYLANPINAR, Turkey — Kurdish-led fighters in Syria attempted on Tuesday to retake the strategic border town of Ras al-Ain from Turkish-led forces, as Kurdish...

CEYLANPINAR, Turkey — Kurdish-led fighters in Syria attempted on Tuesday to retake the strategic border town of Ras al-Ain from Turkish-led forces, as Kurdish and Syrian government troops sought to repel a Turkish incursion in northern Syria.

The Kurdish counteroffensive came as Syrian government troops were deployed inside the northern city of Manbij, a Syrian state broadcaster said on Tuesday. The broadcast showed what it said were residents of Manbij celebrating the arrival of government troops.

Heavy fire from machine guns could be heard to the south and southwest of Ras al-Ain and from the Turkish border town of Ceylanpinar, which is less than a mile from the fighting. Turkish artillery pounded an eastern suburb of the Syrian settlement midmorning, raising clouds of smoke above low farmhouses and pistachio groves.

As of Tuesday, fighting in Ras al-Ain and other areas in northern Syria has forced at least 160,000 people from their homes, according to United Nations estimates. The Kurdish authorities put the figure at 270,000.

The battle highlighted the fluctuating nature of the Turkish incursion, which began last Wednesday after President Trump ordered the evacuation of American troops from the Turkish-Syrian border, opening the door for Turkish troops and their Syrian Arab proxies to enter Kurdish-held territory in northern Syria. 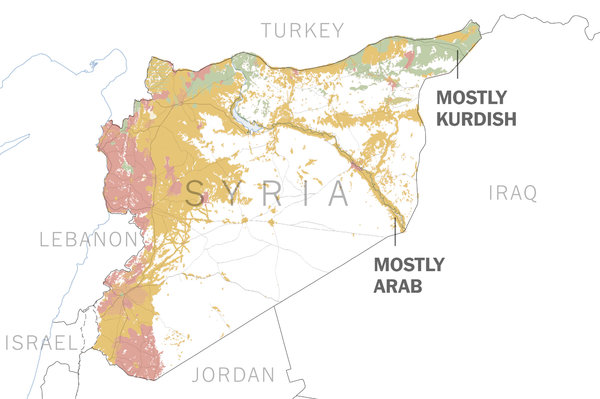 The surprise American withdrawal from parts of northern Syria reshuffled old alliances and touched off a new stage of the eight-year war.

The White House decision drew global condemnation and left Kurdish fighters feeling betrayed, and the situation has quickly turned into a blood bath. Experts on the region warned that the withdrawal of American troops would embolden Russia, Iran and the Islamic State.

Abandoned by the Americans, and quickly losing land to the Turkish force, the Kurdish authorities sought protection from the Syrian government and its largest backer, Russia.

Since the Kurdish authorities asked the government of President Bashar al-Assad for assistance, thousands of Syrian Army troops have flooded into northern Syria for the first time since the government lost control of the region several years ago.

But Syrian government troops have stayed clear of the border region near Ras al-Ain, where Kurdish troops fight on alone. Instead, government forces have deployed to other strategic positions, such as the western cities of Manbij, to help alleviate pressure on Kurdish fighters on the front line.

The last-minute alliance comes at great cost to the Kurdish authorities, who are effectively giving up self-rule.

Syrian Kurdish militias established a system of self-rule in northern Syria in 2012, when the chaos of the Syrian civil war gave them the chance to create a sliver of autonomous territory free of central government influence.

The fighters greatly expanded their territory after they partnered with an international military coalition, led by the United States, to push the Islamic State from the area.

After the Kurdish-led fighters captured ISIS territory, they assumed responsibility for its governance, eventually controlling roughly a quarter of the Syrian landmass. They have also been guarding thousands of ISIS fighters and their families, hundreds of whom fled a detention camp in Ras al-Ain after Turkish-led forces bombed the surrounding area.

The Kurds’ control of the land in Syria enraged Turkey, since the militia is an offshoot of a guerrilla group that has waged a decades-long insurgency against the Turkish state. Turkey has long pressed the United States to abandon its alliance with Kurdish fighters so Turkish troops could enter Syria and force the Kurds from territory close to the border.

Washington rebuffed Turkey’s requests for several years, maintaining a de facto peacekeeping presence along the border near Ras al-Ain, the town at the center of the fighting on Friday. But that changed last week, when Mr. Trump made a sudden decision to withdraw troops — first from that particular area, and later from all of northern Syria.

Carlotta Gall reported from Ceylanpinar, and Patrick Kingsley from Istanbul.