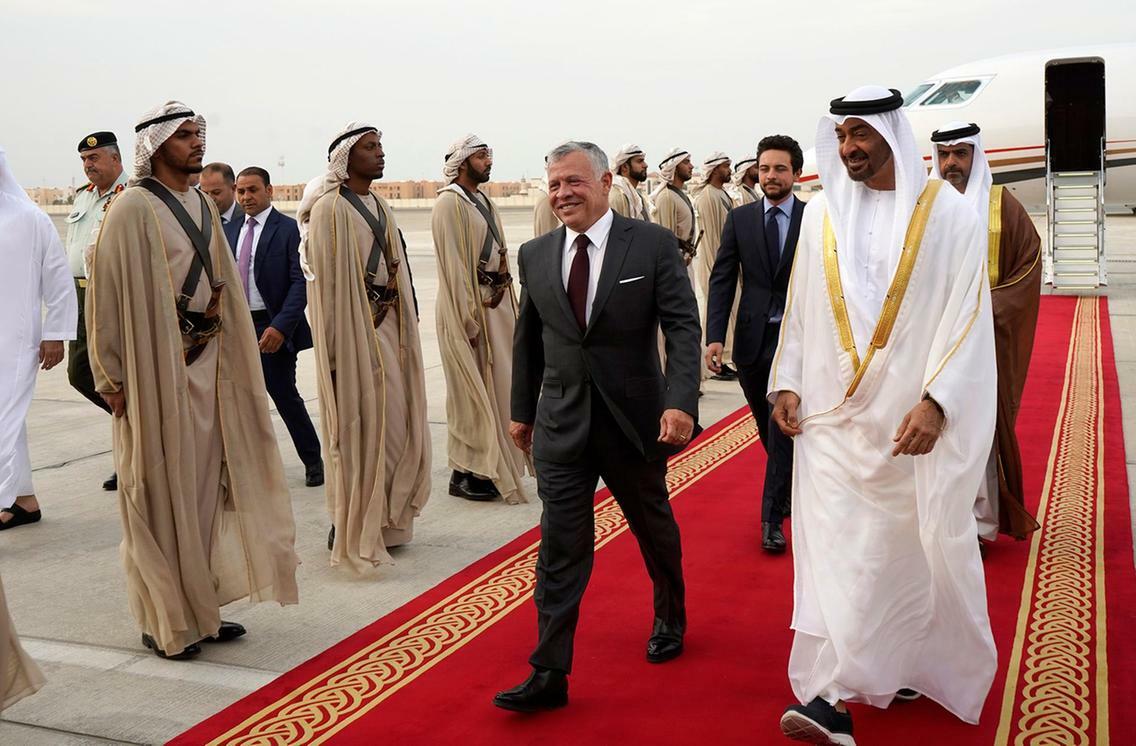 During the meeting, held at Al Bateen Palace, King Abdullah and Sheikh Mohammad expressed pride in the deep-rooted, brotherly ties between Jordan and the UAE, as well as keenness to maintain cooperation and coordination on various issues of mutual concern, a Royal Court statement said.

The King expressed appreciation for the UAE, under the leadership of President Sheikh Khalifa Bin Zayed Al Nahyan, over its ongoing support for Jordan.

Sheikh Mohammad said the UAE gives great importance to relations with Jordan and works to advance them in various areas towards further development and progress.

He also expressed appreciation for the King’s efforts in bolstering Jordan-UAE ties, according to the statement.

Discussions at the meeting, attended by senior officials on both sides, covered the latest regional developments and efforts to reach political solutions to crises in the region.

The King reaffirmed the importance of supporting the Palestinians as they seek their legitimate rights to an independent state on the June 4, 1967 lines, with East Jerusalem as its capital.

Sheikh Mohammad hosted an Iftar in honour of the King and the accompanying delegation, attended by a number of senior Emirati officials.

At the conclusion of the meeting, a joint Jordanian-Emirati statement was released, noting the importance of bilateral ties.

The statement said The King and Sheikh Mohammad stressed the two countries’ keenness to maintain consultation and exchange views on regional developments.

The King and Sheikh Mohammad also reaffirmed that Jordan’s and the UAE’s security is one and the same, expressing unity and solidarity in countering all challenges, the statement added.

The King stressed that Jordan stands by the UAE against all attempts targeting its stability, as its stability and the security of the Gulf Arab region are integral for regional and global stability.

Sheikh Mohammad thanked Jordan for supporting the UAE and Saudi Arabia in dealing with the recent attacks on ships near Emirati territorial waters, as well as oil facilities in Saudi Arabia, noting that Jordan represents “key strategic depth” for the Gulf Cooperation Council countries.

The King and Sheikh Mohammad directed the foreign ministers and the chairmen of the joint chiefs of the two countries to maintain and institutionalise coordination to counter joint challenges, according to the Royal Court.

Upon directives by The King and Sheikh Mohammad, army units from the two countries will hold a joint exercise in the near future in the UAE.

Moreover, the King and the Abu Dhabi crown prince expressed their keenness to expand cooperation between Jordan and the UAE in all areas, taking steps towards further opportunities of economic, trade, investment, cultural and tourism cooperation, the statement said.

The King returned to the Kingdom on Wednesday night after concluding his meetings with Emirati officials.