The tone for Saturday night’s fight was set early on.

As we marched alongside thousands of Russian-speaking fans towards the 10,000 seat Yas Island arena for the much-awaited UFC242 in Abu Dhabi, we were met with a sea of papakhas in the seated crowds, already chanting “Khabib, Khabib, Khabib”.

But Nurmagomedov was not the only crowd favourite. He was among six other Russian fighters who, with the exception of one Shamil Abdurakhimov, would go on to tie or win preliminary and main fights on Saturday evening to the sound of the applause of thousands of fans.

From the walk to the arena all the way to Nurmagomedov’s triumph over now-former interim champion Dustin Poirier, one thing was clear: Russian fighters are making their mark as rising forces in the world of mixed martial arts.

“He’s pretty special, man,” UFC President Dana White said of Nurmagomedov following his win over US Poirier via a choke hold in the third round.

The fighter from Dagestan, the first Russian champion in UFC history, boasts a perfect professional UFC record with 28 wins and no losses. 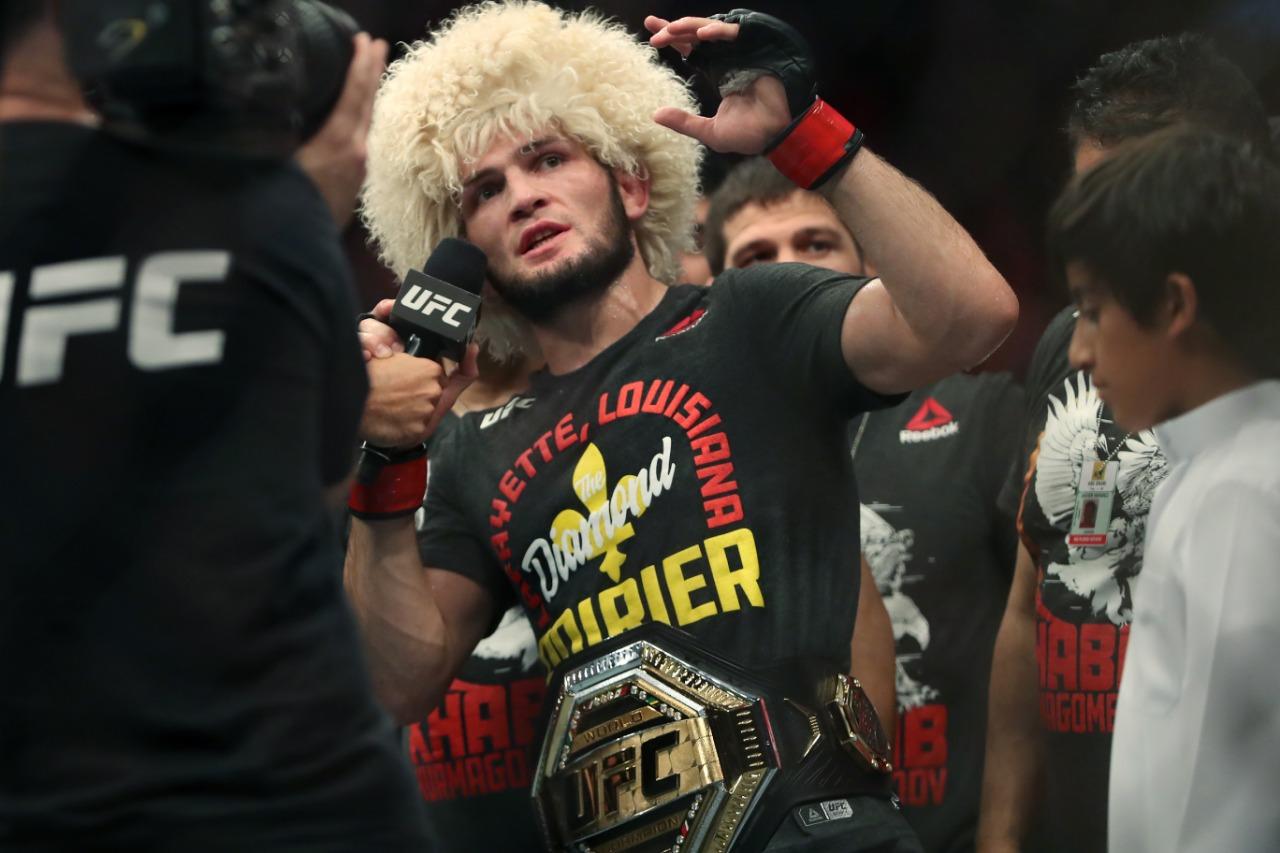 While he was reportedly paid $2 million for his last fight against Irishman Conor McGregor, Nurmagomedov’s father Abdulmanap said, “This time, it will be 3 to 3.5-fold higher… We aren’t fighting for peanuts and we know our value… That sum [$2m] is too little for us because we are the best at the moment….we have defeated the best and are ready to keep fighting with the best,” he told Russia’s TASS news agency.

Nurmagomedov will reportedly earn more than $6 million following his victory over Poirier, though the official pay-outs will not be released.

The Russian’s fight on Saturday marked his first since defeating McGregor at UFC229 in October 2018, after which he served a nine-month suspension for a controversial post-fight brawl. The fighter’s popularity has only continued to grow since, however, with Russian President Vladimir Putin having also showed his support for Nurmagomedov in October.

“I know you were not there for team or for country, you performed personally for yourself. But at the end of the day you are a Russian citizen and we care about it. We care about what people think about our citizens wherever they are. So we followed everything that was going on and we felt for you. Thank you,” Putin said.

“I beat today a very tough opponent… I’m very happy to win this fight. Who wins [between Edson] Barboza or [Paul] Felder, I am ready,” he said.

He added, “I’m very happy to be here in Abu Dhabi representing Russia. Thank you for all who came to support me and Zuba [Zubaira Tukhugov] and everyone else.

Tukhugov, who returned from suspension following October’s brawl for his involvement in the incident, scored a tie with the UK’s Lerone Murphy. A crowd favourite, his nickname “Zuba” echoed across the stadium as fans cheered him on.

Nurmagomedov is likely to face American lightweight Tony Ferguson, UFC’s White said at the post-fight press conference. The two were scheduled to fight in 2015 before Nurmogomedov pulled out following an injury.

“He’s next. Tony Ferguson is next in line for the fight, if he accepts the fight. We’ll see how this thing plays out, when Khabib will fight again and if Tony wants to fight,” he said.

Should Ferguson turn down the fight, White said a rematch with McGregor is possible.

“If for whatever reason Tony can’t take the fight or doesn’t want the fight at that time, then we would figure out what was next. But yeah, Conor would make a lot of sense,” he said.

Irishman McGregor took to Twitter to request the rematch.

“Book my rematch for Moscow,” he wrote.

While Nurmagomedov said another fight in Abu Dhabi is possible due to UFC’s five-year partnership with the capital’s Department of Culture and Tourism, he said he would also like to fight again in Russia.

“I love this region. I’ve been in Turkey, Europe, Russia, US, Brazil, Canada, Dagestan, Africa but this place [Abu Dhabi] is the [safest] place in the world. It’s amazing place. Of course I want to fight there. I love these people, these people love me. I hope they like my performance. I want to come back here maybe, why not? UFC already have an exclusive contract. Maybe [I’ll fight] in Russia, in Moscow in 80,000 stadium. I can fight in Moscow, in Abu Dhabi, maybe in Africa,” he said.

However Nurmagomedov said he wants to “forget the [beaf] with the last guy [McGregor]… We [Justin Poirier] show really what is it MMA – number one thing is respect. You have to respect gym, what your coach tells you, you have to respect teammates… Everything is about respect. This is what we show always with Dustin and his great team.”

At the post-fight conference, Poirier, wiping away tears, said the memorabilia sold will help his foundation build a water well in Uganda, but said he will remember his loss “for the rest of my life”.

“I was just so prepared, this one really hurts. I just didn’t do enough and I’ve got to live with it for the rest of my life.”

Of Nurmagomedov, he said, “The guy is good, man. He’s a world champ.”

Meanwhile, UFC executive vice president Lawrence Epstein said the Middle East is “a very important” market for the UFC due to its large population of young fans, he told Arabian Business on Thursday, adding that having an athlete like Nurmagomedov “that’s both a star and has a local following is even better”.

“He’s a Muslim athlete and has spent a lot of time in the region. That makes him really attractive here. Our goal is to expose as many people to the sport of MMA and the UFC brand. Having an athlete cut through and that gets people interested in a particular region is going to help us accelerate that growth,” he said.