Kazakhstan is keen on supplying Qatar with a wide range of food and agricultural products, Kazakhstan ambassador Askar Shokybayev has said. “My country is... 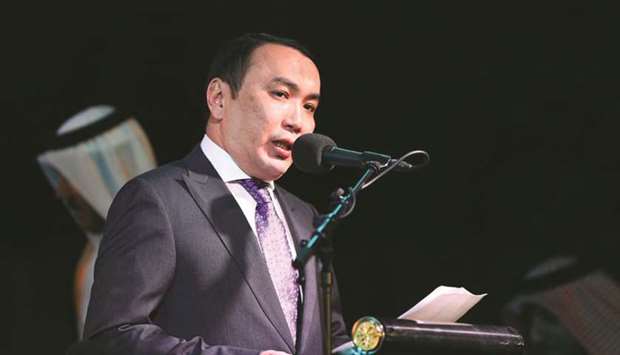 Kazakhstan is keen on supplying Qatar with a wide range of food and agricultural products, Kazakhstan ambassador Askar Shokybayev has said.
“My country is a big producer of halal meat, wheat and organic foods such as apple, honey and flour, among others, without any chemicals or non-GMO,” the envoy told Gulf Times.
While bilateral relations between Qatar and Kazakhstan continue to flourish, he said both sides are also reviewing their co-operation in the field of agriculture, with a focus on halal food production.
Kazakhstan aims to become a major meat exporter by 2020, targeting to produce about 180,000 tonnes of beef, which will be exported to various countries.
Apart from food and agriculture, Shokybayev said Kazakhstan, as one of biggest construction material producers, also hopes to enter the Qatar market and supply the items required for various infrastructure projects.
“We are talking about high-quality iron and steel as well as cement, and the state-of-the art technologies we use, among others,” he added.
“Our mining companies are very interested in inviting Qatari investors to explore their fields and mineral deposits.”
Shokybayev hopes a direct flight between the two countries will be realised in the near future, which is expected to further enhance trade and investment ties.
“Alongside this, we are also looking forward to establish land and sea connections via Iran and its southern sea ports like Bandar Abbas to the seaports of Qatar,” he noted.
“These air and land, as well as sea connections, will for sure help boost exports and imports between Kazakhstan and Qatar.”
Shokybayev said Kazakhstan, with a Muslim-majority population of around 18mn, is a growing investment market, especially for Qatar.
To develop the two countries’ economic ties, he noted a delegation from Kazakhstan, led by the chairman of the Investment Committee at the Ministry of Foreign Affairs, Bakyt Batyrshayev, met with the leadership of the Qatar Investment Authority, the Ministry of Municipality and Environment, Qatar Post and Widam as well as the heads of structural units of these organisations, in Doha on May 29-30.
“The attention of the Qatari side was drawn to the investment attractiveness and advantages of Kazakhstan and a few promising projects were also discussed, which are subjects to the current trade-economic and investment agenda between the two countries,” the envoy said.