WikiLeaks founder, Julian Assange, has been dominating news headlines for almost a week after he was dramatically arrested last Thursday and dragged from the... 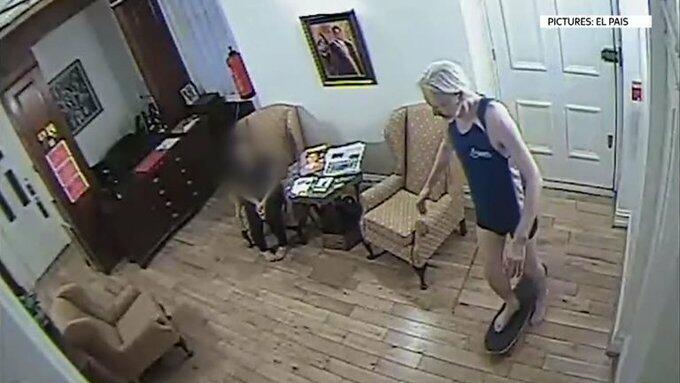 WikiLeaks founder, Julian Assange, has been dominating news headlines for almost a week after he was dramatically arrested last Thursday and dragged from the Ecuadorian Embassy’s building by the UK police.

Rumors have been swirling over the journalist’s life inside the embassy where he has been taking refuge for the past seven years, with news stories covering his aggressive behavior, using the embassy as a spying center and even Assange failing to take proper care of his cat.

Following this, the Spanish newspaper, El Pais, has released security footage showing the 47-year-old journalist practicing skateboarding inside the embassy building in London.

While the timing of the video is not clear, the Spanish newspaper, El Pais, said they obtained the footage from the Spanish security firm, Undercover Global S.L, which was tasked with protecting Assange until 2017.

As the world questioned actual charges led to Assange’s arrest, Ecuador’s President Lenin Moreno explained on Twitter that he had decided to take away the journalists’ asylum because of the latter’s bad behavior and having little respect for Ecuador, the building he lived in and the staff who took care of him for years.

Yet, accusations revealed by the president do not seem to be worthy of the fact that Assange’s life is in danger after facing years of jail and human rights violations. However, some suggest that his arrest is related to him leaking US government-related documents that exposed lies and war logs from Iraq and Afghanistan.

On social media, most opinions have been mostly agreeing on the same point, which is whether you like Assange or not, his arrest is a violation of freedom of speech and journalists rights.

Julian Assange’s arrest by the UK authorities at the Ecuadorian embassy is a political black hole. It’s a shame. This is political power threatening the freedom of speech. It’ll take every individual to act and protect the most valuable rights. Stop the extradition.

Julain Assange has been a controversial figure for the past decade as he lived inside the Ecuadorian Embassy for seven years after leaking highly-sensitive information on issues like the Collateral Murder video in Iraq, the Afghanistan war logs and Cable Gate in addition to rumors on his involvement in US 2016 presidential elections.