INGLEWOOD, Calif. — We thought we were getting a Fight of the Year candidate Saturday night, but instead we got a virtuoso performance from... 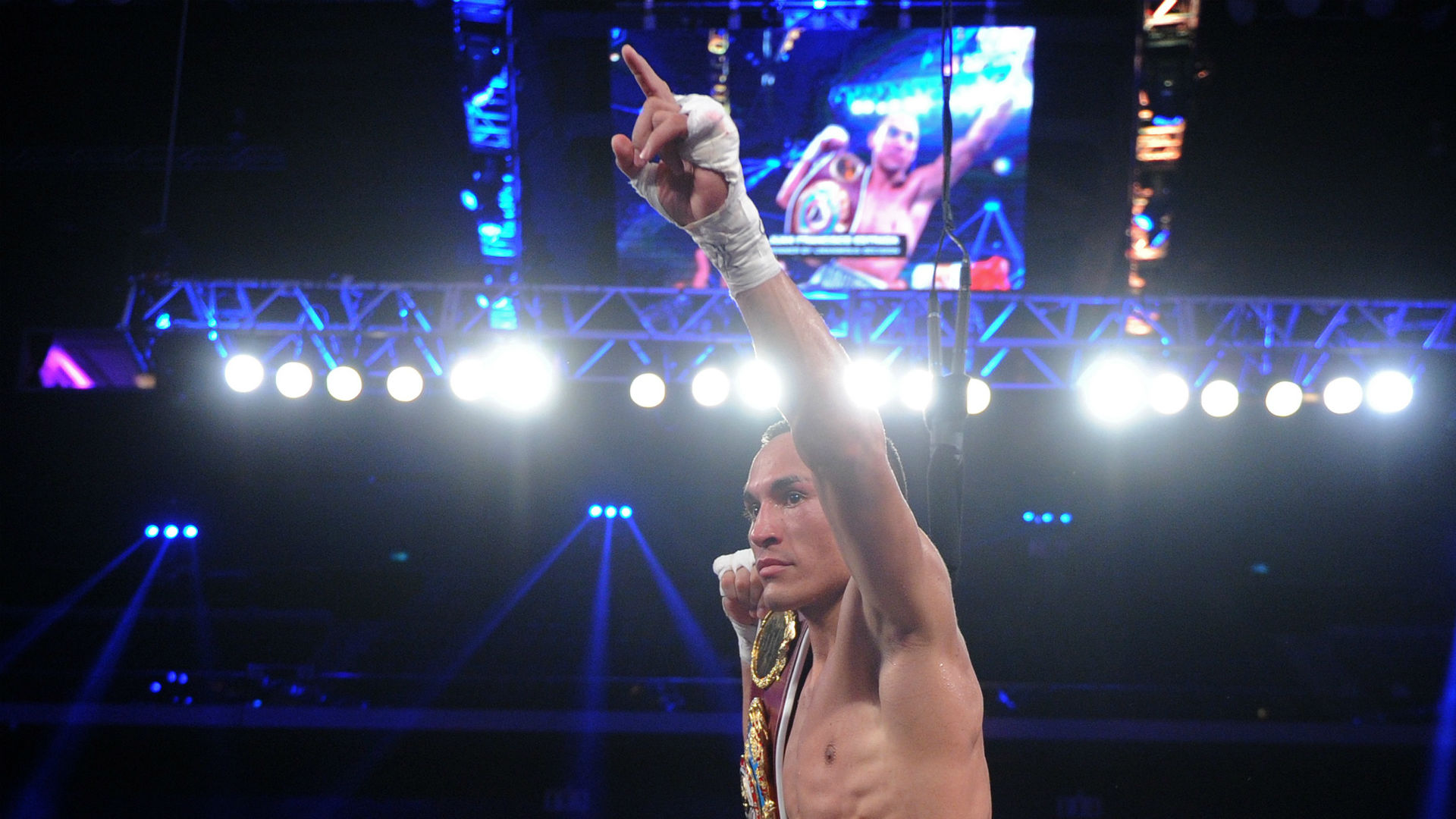 INGLEWOOD, Calif. — We thought we were getting a Fight of the Year candidate Saturday night, but instead we got a virtuoso performance from one of the best fighters in the world.

Juan Francisco Estrada finally came up big in a marquee fight, earning a 12-round unanimous decision over top pound-for-pound fighter Srisaket Sor Rungvisai for the WBC super flyweight title in a long-awaited rematch. Estrada (39-3, 26 KOs) outboxed Rungvisai (47-5-1, 41 KOs) in the early going and outlasted a late surge from the Thai champion, winning by scores of 116-112, and 115-113 twice. The bout headlined a DAZN-streamed card from The Forum, a place that’s long welcomed some of the sport’s smallest warriors. A crowd of 5,127 attended the show.

In their first encounter last February, Estrada got off to a slow start. That wasn’t the case Saturday, as Estrada came right out of the gate attacking. He dominated from mid and long range, blasting Rungvisai with combinations before moving out of the way of return fire.

Estrada looked loose, with his opponent looking stiff. Estrada made Rungvisai miss wildly and when the Thai tank landed a big shot, Estrada took them well. In their first fight, Estrada went back to the corner early and mentioned that Rungvisai indeed hits hard. But after going 12 rounds the first time, Estrada knew he could take Rungvisai’s best shots.
Estrada set up some of his best work early on with a precise body attack. The opening round saw Estrada work the body, which then allowed him to land some pretty uppercuts. Estrada’s best punch was a jab, which kept Rungvisai at bay as he came in recklessly throwing overhand rights.

In the seventh, Estrada landed a couple of right hands, and avoided Rungvisai’s attack. When the two met in center ring moments later, Estrada patted his gloves together and landed a nice right hand, further cementing his dominance up until that point.

Rungvisai surprisingly fought from an orthodox stance early in the fight, finally going to his natural southpaw stance in the later rounds.
By then, Estrada had built a big lead on the scorecards. He was up 80-72 on one card and 78-74 on two others. Rungvisai came on strong towards the end, but it was too little, too late. But Estrada didn’t stop trying to pile up points on the cards.

“I needed to show the Mexican fans and everyone here tonight that I was going to win that belt,” Estrada said.

In his two previous big fights, Estrada came up short against Roman “Chocolatito” Gonzalez in a close loss in November 2012, and again versus Rungvisai via majority decision in February of last year. At long last, Estrada gets that career-defining victory and has established himself at least on the fringes of the top ten fighters pound-for-pound in the sport.

Matchroom Sport promoter Eddie Hearn told Sporting News he would love to see Estrada and Rungvisai do it again, but also noted that he has WBA champion Khalid Yafai (25-0, 15 KOs) in his stable, and that would be quite a unification bout if it were to come off.

“If he wants a third fight, I will give it to him,” Estrada said in the ring afterward. “I would prefer to fight some other champion first. That’s what I think is next.”

Estrada was the clear crowd favorite, with chants of “Gallo! Gallo! Gallo!” ringing out across The Forum throughout the night. With Chocolatito’s best days behind him, Southern California fight fans may have found the next 115-pounder to throw their support behind for the foreseeable future. Though The Forum wasn’t quite as packed as in Chocolatito’s prime, Estrada is 30 years old and definitely won himself some new fans with his fantastic performance.
—
It wasn’t easy, but Los Angeles native Daniel Roman unified two belts at 122 pounds with a 12-round majority decision over then-unbeaten TJ Doheny in a thrilling war. The scores were 116-110 twice and 113-113 in favor of the WBA champion, who was fighting in the LA area for the first time in his career. He added Doheny’s IBF belt to his mantle with the win.

Doheny proved to be a bit tricky early on, using cute movements to frustrate Roman and make him miss, landed pot shots to a lot of success. Doheny tasted the canvas in the second round courtesy of a long left hand from Roman but didn’t otherwise seem hurt. An action-packed fourth round forced swelling around Doheny’s right eye and blood from the nose, but he answered with his own barrage. He nicked a close sixth round before unloading the clip on Roman in the seventh. Roman went down from what was ruled a slip, though it could have easily been ruled a knockdown.

Roman took control of the bout in the ninth, clipping Doheny with a big right hand. The 10th round saw Roman land some body shots that bothered the IBF champion, and a left uppercut early in round 11 sent Doheny to the canvas. It looked as though it was going to spell the end of the fight, but Doheny proved his grittiness in not only surviving but getting off some shots of his own.

After the fight, Roman said he wants to face unbeaten Rey Vargas, the WBC champion at 122 pounds. Doheny was a long-odds underdog but proved he belongs at the top level and doesn’t lose much in defeat beside his world title.

Jessie Vargas earned his $1.2 million purse in his super welterweight debut, stopping a game Humberto Soto in the sixth round. Vargas (29-2-2, 11 KOs) was cut by a headbutt in the opening moments of round two and had to deal with a pesky Soto (69-10-2, 37 KOs), who landed some tremendous shots.

It was an even affair through four rounds, with the two trading on even terms when the fight was in a phone booth. When Vargas got some distance, he was able to land almost at will, beginning in the fifth round. He dropped Soto with a pretty overhand right in the sixth round, and sensing blood in the water, chased Soto to the ropes. It was there Vargas wasted no punches, landing some devastating punches at will before referee Thomas Taylor rescued Soto at 1:48 of the round.

Vargas earned his first win since December 2017, following back-to-back draws against Adrien Broner and Thomas Dulorme. Soto should hang them up after giving the fans a solid effort. Vargas still wants a fight with Kell Brook.

Compton-trained super middleweight Anthony Sims Jr. (19-0, 17 KOs) saw his 17-fight knockout streak come to an end, earning a 10-round unanimous decision over gatekeeper Vaughn Alexander (14-3, 9 KOs) by scores of 98-92 twice and 96-94. The 24-year-old Sims looked solid but is still some time away from being a serious player at 168 pounds.

2016 Olympic silver medalist Shakhram Giyasov (8-0, 6 KOs) of Uzbekistan (now fighting out of Brooklyn) struggled on the way to a unanimous decision over Emanuel Taylor (20-6, 14 KOs) in their ten-round super lightweight bout. Taylor hurt Giyasov a number of times throughout the bout but was mostly outworked en route to scores of 99-91 twice and 97-93. Sporting News scored the bout 95-95, and even Matchroom Sport’s Eddie Hearn felt the scores were too wide when he stopped by press row at the conclusion of the bout. Giyasov clowned a bit and got checked with left hooks from Taylor inside on a number of occasions. Taylor just didn’t piece enough combinations together and Giyasov did. Giyasov proved he’s still well away from championship level.

Towering 18-year-old Mexican-American middleweight prospect Diego Pacheco (3-0) made easy work of Guillermo Maldonado (1-1) in the opening round of their four-round bout. Maldonado didn’t belong in the ring with the former top-rated amateur Pacheco, who was making his U.S. debut after fighting twice before his 18th birthday in Tijuana. Pacheco was a crowd favorite, hailing from East Los Angeles, and at 6’4″ is a monster at the weight. He hurt Maldonado with every shot he landed and put him down in a heap in the corner with a barrage, bringing an end to the fight at 1:46.