AMMAN, Jordan — Jordan’s king on Sunday reclaimed border lands that Israel was allowed access to under a 1994 peace treaty reached between the... 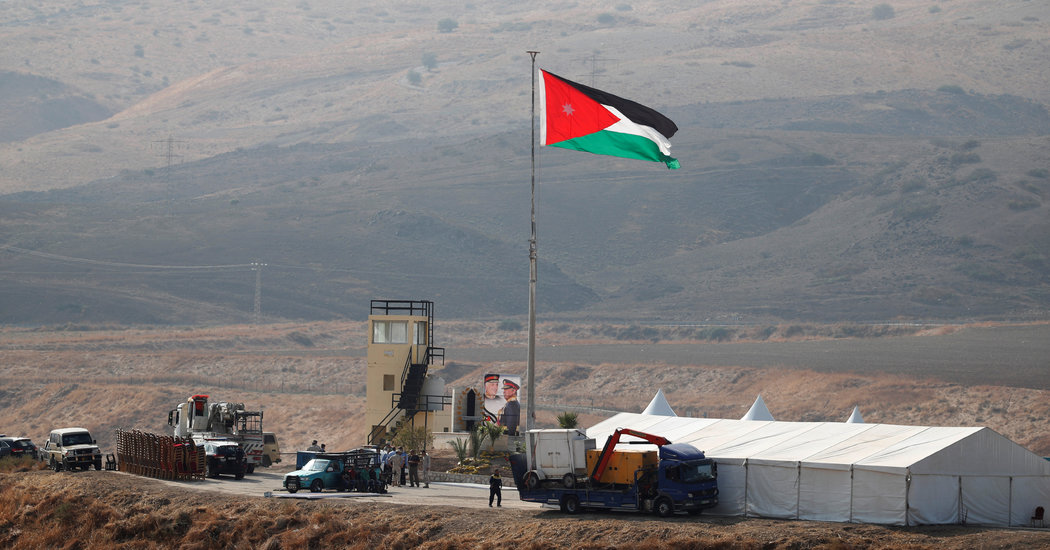 AMMAN, Jordan — Jordan’s king on Sunday reclaimed border lands that Israel was allowed access to under a 1994 peace treaty reached between the neighboring countries.

Jordanians applauded the step but for many Israelis, the failure to negotiate an extension of the border area-land access was disappointing, and attested to the sorry state of relations 25 years after the peace accord was signed.

Annexes to the peace treaty had allowed Israeli farmers to continue working the lands and tourists to visit them.

But in a speech to Parliament, King Abdullah II said Jordan was reclaiming “full sovereignty over every inch of those lands.”

Though the peace treaty has proved firm and lasting, and has led to tight security coordination, it remains unpopular with ordinary Jordanians.

Years of impasse in the Israeli-Palestinian peace process has not helped.

Israeli-Jordanian tensions have flared periodically because of disputes with the Israelis over the handling of security at the Aqsa Mosque compound in Jerusalem’s Old City, a hotly contested holy site over which Jordan has official custodianship.

“Israel’s repeated violations and actions have left the king with no choice except to cancel the land lease,” said Hassan Barari, a professor of Middle Eastern politics at the University of Jordan. He said, “There were multiple steps that Israel took in the past few years that were extremely provocative.”

Among them, Mr. Barari cited Israel’s placement of metal detectors at the entrances to the mosque compound in 2017, which were removed under Jordanian pressure.

More broadly, he said, Jordanians felt sidelined from the Israeli-Palestinian process, “like they had no say.”

A more recent dispute between the countries was resolved last week, when Israel released two Jordanians, Hiba Labadi and Abdul Rahman Miri,who had been held in Israeli administrative detention for two months without charges on vague security grounds. In return, Jordan agreed to return its ambassador to Tel Aviv after he had been recalled for consultations.

King Abdullah, under internal political pressure, had given a year’s notice of his intention to pull the lease Israel had for the lands.

On Sunday, the Jordanian Army raised the country’s flag in Baqura, a pocket of about 175 acres of land some 10 miles south of the Sea of Galilee, sandwiched between the Jordan and Yarmouk Rivers. In Hebrew, it is known as “the Island of Peace.”

Recognizing Israeli private property rights there, Jordanian officials said Israeli farmers would be allowed continued access to the lands if they applied for visas through the Jordanian Embassy in Tel Aviv and passed through official border crossings.

Israelis in the area said such an arrangement was impractical and, cast the handover of the land to full Jordanian control as a diplomatic failure.

“There is a feeling of frustration and disappointment,” said Eli Arazi, a member of a nearby kibbutz, or communal farm, who sat on the negotiating team for the 1994 agreement and on the committee that was set up to oversee the special arrangement.

“Our feeling is that this could have been prevented if there had been more effort on both sides for a proper dialogue,” he said.

Speaking by telephone on Sunday, Mr. Arazi said Jewish farmers had worked the land for 70 years, growing fruit and vegetables. He said he hoped that in the future, the farmers would be able to return to the agricultural lands via the simple old, yellow gate separating them from Israeli territory, even if it meant showing a passport.

On Saturday, about 1,000 Israelis made farewell visits to the “Island of Peace,” with the last group returning toward dusk from a final coordinated tour of the site across the Jordanian lines.

A much-loved nature spot with a rich history, the area has an emotional pull for many Israelis. In 1997, less than three years after the signing of the peace treaty, a Jordanian soldier went on a shooting rampage that killed seven Israeli schoolgirls visiting the border site.

There were no official ceremonies to mark the handover. Over the weekend, the Israeli news media merely broadcast images of two Israeli soldiers closing the yellow gate for one last time.

At the second tract of land, known as Al Ghamr, Israeli farmers from the nearby cooperative village of Zofar have long worked about 370 acres of agricultural land on the Jordanian side of the line. Officials on both sides said the farmers would be allowed to harvest the crops that were planted before the annex to the peace agreement expired.