Jordanian Intelligence Foils Plot Against US, Israeli Diplomats and US Soldiers

Fighters from Islamic State of Iraq and the Levant (ISIL or ISIS) and other groups have long targeted the US-allied kingdom ... 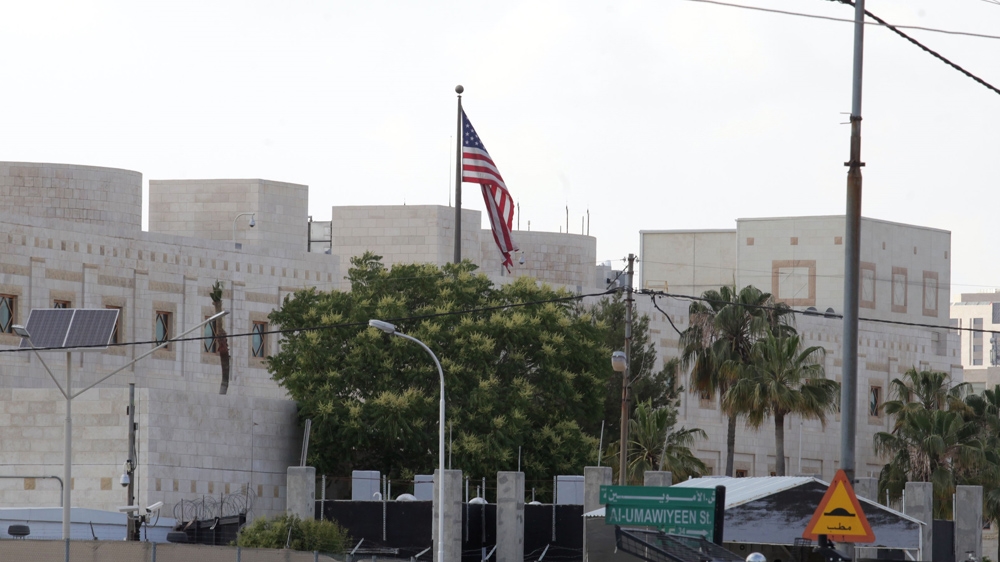 Fighters from Islamic State of Iraq and the Levant (ISIL or ISIS) and other groups have long targeted the US-allied kingdom [File:Shadi Nsoor/Getty Images]

Jordanian intelligence has said it foiled a plot last year by two people to mount attacks against US and Israeli diplomats alongside US troops deployed at a military base in the south of the country, according to a statement issued by the General Intelligence Directorate (GID).

The GID statement, carried on Tuesday by the state-owned al-Rai newspaper, said the suspects had viewed Islamic State of Iraq and the Levant (ISIL or ISIS) materials online in 2015, and were communicating with each other via messaging apps to discuss their views and support for ISIL objectives in the region.

The GID statement said the suspects planned to drive vehicles into their targets and attack them with firearms and knives. It added the suspects had been arrested last year and would stand trial in Jordan‘s state security court.

The court hears “terrorism” and other high profile criminal cases, but is not part of the country’s civilian justice system. Jordanian legal scholars have questioned the court’s constitutionality.

A former Jordanian intelligence officer told Al Jazeera on the condition of anonymity because he was not authorised to speak to the media that “the timing of the announcement is rather peculiar given the suspects have been in custody for a long time.”

“Why did they announce the arrests today almost two years after the arrest was first made?” he said. ” I think the timing is politically motivated and its intended audience is the American political leaders to show Jordan’s war on terror efforts,” he added.

Hasan abu Haniyeh, an Amman-based analyst, said it appeared that the GID and the government were trying to send several messages to international and domestic audiences.

“The GID wants to show Jordanian society that it is still relevant and capable of fighting terrorism especially in recent terror-related attacks on targets inside Jordan,” he said.

Abu Haniyeh said Jordan’s historic role in fighting “terrorism” in the region has diminished in recent years and its value to the US “counterterrorism” establishment appears to have decreased.

“For that reason, the GID is trying to get back into the game,” he added.

Jordanian supporters of  ISIL and other armed groups have long targeted the US-allied kingdom, with dozens of them currently serving lengthy prison terms.

Jordan’s King Abdullah, an ally of Western powers, has been among the most vocal leaders in the region in warning of threats posed by armed groups.

Several incidents over the past few years have jolted Jordan, which has been comparatively unscathed by the uprisings that have swept the Middle East since 2011.

Last year, four members of the security forces were killed in an attack attributed to groups linked to ISIL.

In 2016, a suicide bombing killed seven guards near the border with Syria, which ISIL claimed responsibility for.

While months later in another ISIL-claimed attack, 10 people were killed in a shooting in the tourist town of Karak.

Jordan last year also said it had foiled an ISIL plot that included plans for a series of attacks on security installations, shopping centres and some religious figures. It arrested the suspects.

Ali Younes contributed to this report