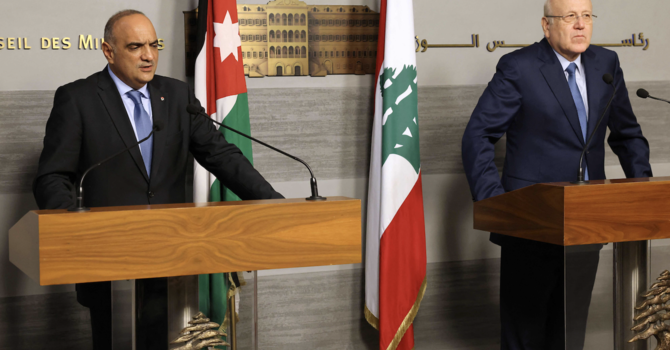 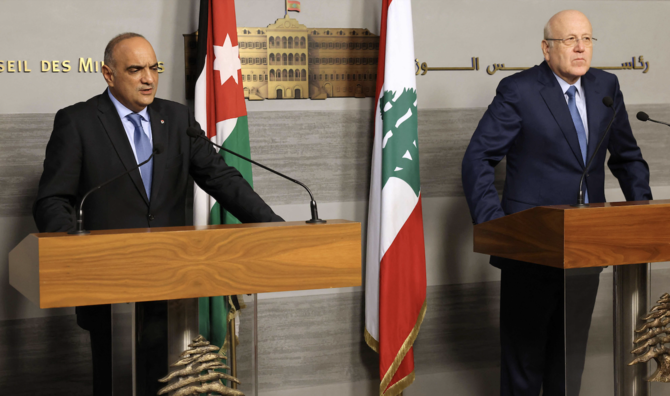 Khasawneh arrived in Beirut on Wednesday night on an official 24-hour visit. He is the first foreign official to meet Lebanon’s new Prime Minister Najib Mikati, who took office earlier this month.

Following his meeting with Lebanese President Michel Aoun, Parliament Speaker Nabih Berri and Mikati, Khasawneh stressed Jordan’s “readiness to stand by Lebanon and its needs and cooperate with the country, especially in the field of energy.”

Khasawneh told the media: “We will not hold back our capabilities, we’ll respond with all we can for our brothers in Lebanon. We discussed ways to expedite Lebanon receiving Egyptian gas to help some of the energy challenges and electricity sector.”

He said that his visit aimed to “express solidarity with our brothers in Lebanon, a directive and commitment by King Abdullah of Jordan toward the Lebanese people, which is an unshakable commitment.”

Lebanon has been grappling with an economic crisis for two years. There has been a collapse of the local currency, a debt default, a decline in services, and shortages of essential items including energy, with electricity rationing hours exceeding 22 hours per day.

Private generators can no longer fill the gap due to diesel shortages and high prices, leaving the Lebanese struggling to pay their bills, which amount to millions of pounds. The salary of a regular employee in Lebanon now equals the price of 60 liters of gasoline.

At the start of September, Lebanon entered into talks in Syria, then in Jordan, to import Egyptian gas through Jordan and Jordanian electricity.

By the end of August, the Lebanese presidency was informed of US approval to help Lebanon receive gas and electricity from Jordan and Egypt through Syria, thus exempting Lebanon from US sanctions imposed under the Caesar Act, which bans any financial or trade interaction with Syria.

Khasawneh said his meetings also reviewed some agreements that needed to be ratified. “Details related to these agreements and projects will be discussed in the meetings of the Higher Joint Committee.”

Asked whether the Caesar Act bans deals between Lebanon and Jordan through Syria and whether the recent openness to Syria meant the end of his country’s dispute with it, Khasawneh replied: “Jordan has never had any disputes with anyone. We have always been, and remain committed to, our strategic and friendly relations with our Arab brothers, governed by the principles of good neighborliness and non-interference in others’ affairs, and our regional and international relationships are governed by our commitment to international law, the UN charter and the Arab League charter.

“Today, we are seeking to secure the needs of the Lebanese, and we are ready to coordinate with all authorities and countries that can help secure these needs within the growing international commitment to support and secure Lebanon’s needs.”

During the meeting between the Jordanian delegation and Lebanese officials, Aoun expressed hope that “all facilitations will be provided for Lebanese trucks transporting Lebanese produce to Gulf countries after the opening of the Jaber Crossing linking Jordan and Syria.”

The Jordanian-Lebanese Joint Committee has not been convened since 2015, with Mikati saying: “We have many agreements ready to be signed but the Jordanian premier wanted to limit his visit to politics only, to express his country’s solidarity with Lebanon.”

Several other meetings between Jordanian and Lebanese ministers were also held.