King Abdullah’s talks with Russian President Vladimir Putin in Sochi on Thursday covered the strategic partnership between the two countries and the latest regional... 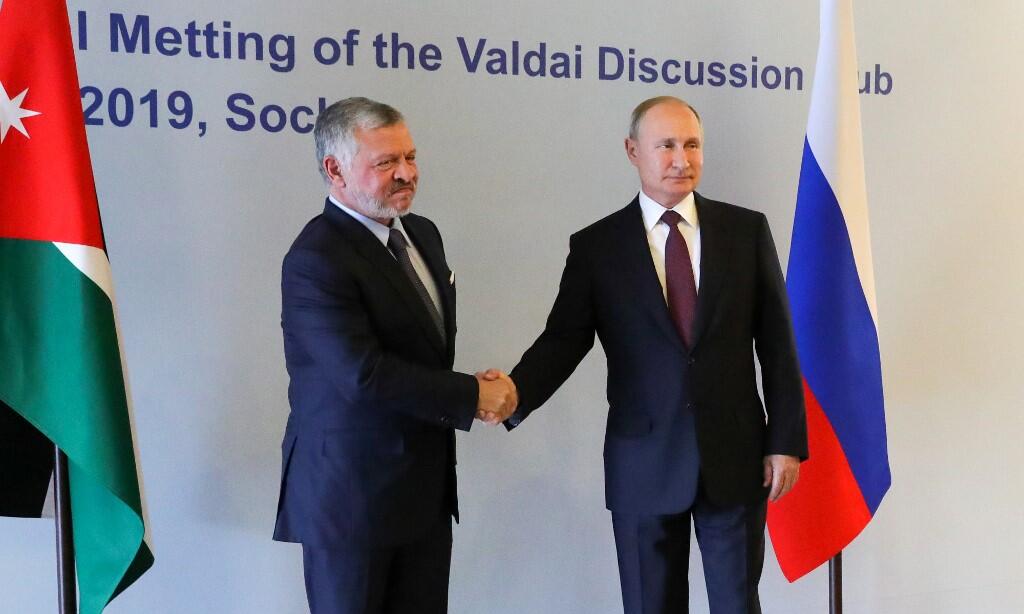 King Abdullah’s talks with Russian President Vladimir Putin in Sochi on Thursday covered the strategic partnership between the two countries and the latest regional and international developments.

The talks, attended by Their Royal Highnesses Prince Hashim, The King’s chief Royal councillor, and Prince Ghazi, The King’s chief adviser for religious and cultural affairs and personal envoy, covered means of bolstering cooperation in various fields, especially economy and defence, according to a Royal Court statement.

King Abdullah and President Putin agreed to increase trade exchange, and to strengthen cooperation between the two countries in agriculture, religious tourism, student exchange  and defence.

In remarks at the start of the talks, The King thanked President Putin for the opportunity to exchange views on current challenges facing the region.

The King noted that diplomatic relations between Jordan and Russia have extended over five decades, adding that his personal relationship with the Russian president goes back 20 years, the statement said.

The King stressed that this relationship is based on honesty and brotherly ties between the two countries.

The King underscored Russia’s important role in the region, noting that without Russia’s engagement in the peace process or in Syria and on other issues, progress would not be possible.

The King thanked Russia for its constructive input on key regional issues, and for its support for Jordan, in addition to bringing common sense in dealing with the region, according to the statement.

For his part, President Putin said that Jordan has always been an important partner for Russia in the Middle East.

President Putin added that he is constantly in contact with Jordan, indicating that although the volume of trade between the two countries is not sizeable in absolute numbers, it increased 3.8-fold last year alone.

The Russian president also thanked The King for participating in the 16th annual meeting of the Valdai Discussion Club.

The King’s talks with President Putin are part of ongoing coordination and consultation between the two countries on issues of mutual concern, with emphasis on Jordanian interests, and in line with keenness to discuss regional issues and the need to step up efforts to achieve peace and stability in the region, the statement said.

Discussing the Palestinian cause, The King reiterated the need to achieve just, lasting and comprehensive peace, based on the two-state solution and guaranteeing the establishment of an independent Palestinian state on the June 4, 1967 lines, with East Jerusalem as its capital, living side-by-side with Israel in peace and security, according to the statement.

The King highlighted the importance of Russia’s role, under the leadership of President Putin, in finding a solution to the Palestinian-Israeli conflict based on the two-state solution.

The Russian president stressed the key role of the Hashemite Custodianship in safeguarding holy sites in Jerusalem.

Turning to the Syrian crisis, The King called for a political solution that preserves Syria’s territorial integrity and the unity of its people while ensuring the safe, voluntary return of refugees.

The King also noted the need to maintain stability, especially in southern Syria, stressing that Jordan’s priority is protecting its security and interests.

Moreover, talks covered regional and international efforts to counter terrorism within a holistic approach, according to the statement.

President Putin expressed appreciation for Jordan’s role, under the leadership of The King, in achieving peace and stability in the region, underscoring Russia’s keenness on enhancing cooperation and coordination with Jordan.

Foreign Minister Ayman Safadi, Adviser to The King for Communication and Coordination Bisher Al Khasawneh, and Jordan’s Ambassador to Russia Amjad Adaileh attended the meeting from the Jordanian side, while a number of ministers and senior officials represented the Russian side.