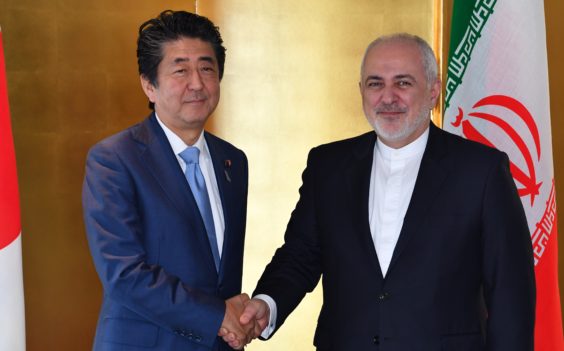 Japanese Prime Minister Shinzo Abe says he plans to talk to Iranian President Hassan Rouhani in New York late next month during the opening of next session of the United Nations General Assembly, the goal being to reduce current tensions in the region. “I would like to work tenaciously and play the best possible role to ease tensions in the Middle East,” he told reporters in Tokyo on Friday at the conclusion of a conference aimed at African development. He explained that “peace and stability in the Middle East have direct links to Japan’s national interest.” Earlier this week, he hosted Iranian Foreign Minister Mohammad Javad Zarif, who has been touring the Far East to drum up support for circumventing harsh US economic sanctions reinstated last year when Washington pulled out of a 2015 multilateral agreement aimed at curbing Iran’s nuclear drive. “We believe every country should be able to enjoy its rights under international law,” Zarif told the media prior to his meeting with Abe. Last weekend, the foreign minister made a surprise appearance at the G7 conference in France, where US President Donald Trump later said he was open to a summit with Iranian President Hassan Rouhani. On Tuesday, however, Rouhani said the US would have to cancel the sanctions before any summit.