Italy Accepts a Jihadist Back in The Country

Kurdish authorities in northeastern Syria have handed to Italy one of its citizens accused of belonging to the Islamic State group, a spokesman said... 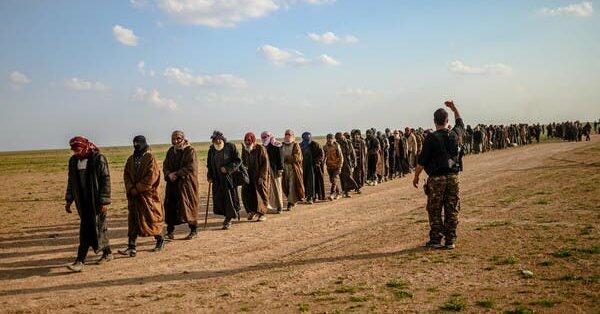 Kurdish authorities in northeastern Syria have handed to Italy one of its citizens accused of belonging to the Islamic State group, a spokesman said on Saturday.

“Italian jihadist Samir Bougana (aka Abu Abdullah) who had been captured fleeing ISIS and had been imprisoned since then, was handed over to Italian government,” said Mustefa Bali, a spokesman for the Kurdish-led Syrian Democratic Forces, using a different acronym for IS.

He said the transfer had been made on Rome’s request.

He did not specify when it took place or whether or not the suspected jihadist had already left the country.

Bougana – also known as Abu Hureyre al-Muhajir or Abu Abdullah al-Muhajir – was first captured by Kurdish fighters in Syria in August 2018 as he tried to flee into Turkey.

He had allegedly been involved in weapons shipments to IS.

His transfer is part of a wider effort by the Kurdish administration to rid itself of the dregs of the IS proto-state.

Following the collapse of the group’s “caliphate” in March, alleged IS fighters from nearly 50 countries have been detained in Syria and Iraq.

Over 11,000 of their family members are being held in Syria’s al-Hol camp alone.

But repatriation is a sensitive issue for Western nations such as France and Britain, which have experienced attacks by homegrown extremists and have little interest in seeing more return.

There are also worries that it could prove difficult to successfully prosecute fighters in European courts for crimes committed in Iraq or Syria.

Britain has gone so far as stripping IS members of citizenship, while France has said it will repatriate only orphans.

The United States, however, has urged Western countries to take their nationals back and has repatriated some of its own, including three IS group fighters and several American women and children.

On Thursday, it warned European countries they were making a “bad decision” by leaving their nationals in Syria instead of repatriating them to face justice.

Prime Minister Scott Morrison said the eight children being repatriated were in the care of Australian government officials, although he fell short of identifying the children or disclosing their location.

Media reported that they include five children and grandchildren of Sydney-born convicted terrorist Khaled Sharrouf and three children of Islamic State group fighter Yasin Rizvic, from Melbourne. Both men and their wives died in the conflict zone.

The children had been taken by an aid agency on Sunday to Iraq, The Australian newspaper reported.

“The opportunity now is for these young children who are coming back to Australia, they can’t be held responsible for the crimes of their parents,” Morrison told reporters.

Morrison had for months said he would not risk any Australian official to rescue Australians from Islamic State group-held territory.

Critics had argued that he had not been prepared to take the political risk of repatriating families of Islamic extremists until he won a narrow election victory on May 18.

Mat Tinkler, director of the Save the Children Fund charity, said there were at least 50 Australian women and children in Syrian refugee camps and all should be repatriated.