Benjamin Netanyahu will remain premier as long as no new government is formed Former armed forces chief Benny Gantz has a... 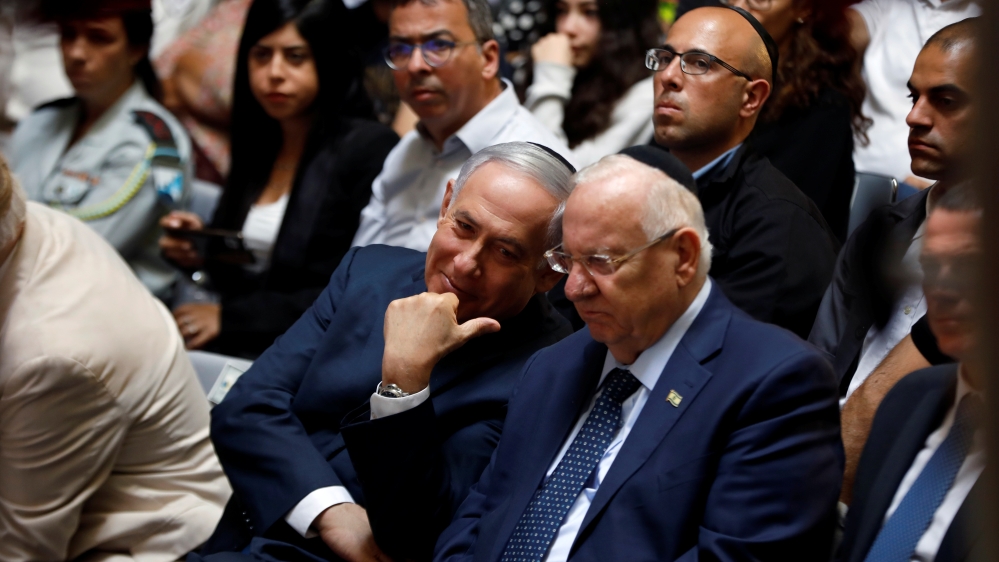 Benjamin Netanyahu will remain premier as long as no new government is formed [File: Ronen Zvulun/Reuters]

Netanyahu suffered an important defeat in his bid to hang on as premier by failing to form a new government.

Gantz is now expected to be given the chance to try to negotiate a coalition by President Reuven Rivlin, but a deadlock following September 17 polls remains and yet another election cannot be ruled out.

It would be the third election within a year after Netanyahu also failed to form a coalition after April polls.

Netanyahu’s decision to inform Rivlin on Monday night that he was unable to form a government by no means signalled the end of his tenure as Israel’s longest-serving prime minister.

He remains premier as long as no new government is formed, and a number of scenarios exist that could see him retain his post even as he faces the possibility of corruption charges in the weeks ahead.

One of the few things clear in Israel’s post-electoral morass was that Netanyahu, who celebrated his 70th birthday on Monday, was not giving up.

But his announcement was a landmark moment in Israeli politics since Netanyahu has been given the president’s mandate to form a government after every election since 2009.

When announcing his decision with a social media video, Netanyahu sought to blame Gantz since the ex-military chief has refused to negotiate on the premier’s preferred terms.

One of Netanyahu’s closest allies, Energy Minister Yuval Steinitz, argued on Tuesday that the prime minister had been “obstructed” in negotiations.

“To the contrary, one comes to negotiations when one begins with disagreements. Therefore, if Benny Gantz offers Netanyahu to sit down with him one-on-one, I’m confident that Netanyahu will sit with him.”

Israeli public television reporters caught up with Gantz outside his home after a workout on Tuesday morning.

“We’re always optimistic, it’s a way of life,” he said from behind the wheel of his car, dressed in shorts and a T-shirt.

A senior member of his centrist Blue and White alliance was strongly critical of Netanyahu.

“What has Bibi done with the mandate to build a government? Four weeks of nothing,” Ofer Shelah said on Twitter, using Netanyahu’s nickname.

“He passed the time in order to continue as prime minister for a little while longer… Bibi wants elections. That is obvious.”

Rivlin said Monday night he intends to ask Gantz to try to form a government, but he can take up to three days to hear out the parties elected to parliament before officially tasking him with doing so.

The Blue and White leader had no political experience before he mounted his challenge to the prime minister he once worked with as military chief of staff, but has now found himself at the doorstep of power.

Whether he can enter the office Netanyahu has held for a total of more than 13 years, however, is a challenge that could bedevil even the most skilled politicians.

“His [Gantz] prospects of forming a minority or unity government with the Likud potentially jettisoning Netanyahu, both look extremely unlikely.

“He may well fail as well. If that happens, the mandate will go the Knesset. If no government is formed after all of this, then Netanyahu could stay in office until a third election is held. But there may be a legal challenge as to whether a prime minister could sit in office while being indicted.”

The deadlock following September 17 polls will likely require major concessions or a decision by members of Netanyahu’s right-wing Likud to abandon him – and both of those options appear a long way off for now.

Both Likud and Blue and White say they want a unity government, but they are divided on how.

Likud has been seeking to negotiate based on a compromise set out by Rivlin that takes into account the possibility the premier will be indicted for corruption in the upcoming weeks.

It could see him remain prime minister for now, but step aside at some point later as he combats the charges.

Gantz would take over as acting premier under such a scenario.

Blue and White said Gantz should be prime minister first under any rotation arrangement since his party won the most seats, finishing with 33 compared to Likud’s 32.

Netanyahu added a further complication to the coalition talks.

He pledged not to abandon the smaller right-wing and religious parties that support him in parliament, saying he represents the entire bloc in coalition negotiations.

That condition is also unacceptable to Gantz, who said it would mean Blue and White joining a Netanyahu government as a junior member.