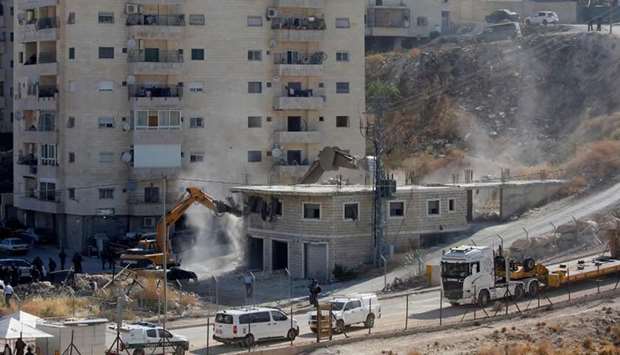 Israeli soldiers began demolishing Palestinian homes in East Jerusalem early Monday morning, according to a Palestine Liberation Organization (PLO) Twitter account. “Preparations started past midnight as hundreds of armed Israeli occupying soldiers bulldozers stormed the town. Families threatened with demolitions were woken up moved out of their homes,” read a Tweet by the PLO – Negotiations Affairs Department.
Palestinian activists in the neighbourhood of Wadi al-Hummus in Sur Bahir said buildings were being rigged with explosives and their inhabitants evacuated in preparation for the demolition of dozens of apartments. According to United Nations officials, 17 Palestinians faced displacement and hundreds of others faced property loss.
Israel has said that the houses were built too close to the barrier which it built around the West Bank, citing security reasons. Palestinians argue that the barrier has divided their neighbourhood into sections that fall under the jurisdiction of the city of Jerusalem and others outside it. The Palestinian Authority has administrative rights over some of those sections and others are under full Israeli rule, the United Nations Office for the Coordination of Humanitarian Affairs (OCHA) said in a statement last week.
“Contrary to the lies spread by the Palestinians: the demolition of illegal structures in Wadi al-Hummus in East Jerusalem is in accordance with a High Court of Justice ruling, which unequivocally determined that these buildings were built illegally near the security fence,” Israel’s Public Security Minister Gilad Erdan wrote on Twitter. “The proceedings in the High Court of Justice took several years and yesterday the High Court of Justice rejected the request for a delay in the implementation [of the demolition],” he added.
There was no immediate comment from the Israeli army on Monday morning. United Nations officials last week called on the Israeli authorities to halt plans for the demolitions in Sur Bahir. “Seventeen Palestinians, including nine Palestine refugees, face the risk of displacement,” the UN said in a statement.
Another 350 people – not yet living in the buildings as they were still under construction – risked massive property loss due to the Israeli authorities’ intention to demolish 10 buildings, including around 70 apartments, they said. On June 11, the Israeli High Court dismissed a petition that had been filed by some residents of Sur Bahir in 2017 against a demolition order of their homes, according to the OCHA. One month ago, Israeli forces sent the residents an “Intent to Demolish” notice. Walid Assaf, head of the PA Commission against the Wall and Settlements said the demolition “intends to create a buffer zone between Jerusalem and Bethlehem to separate them.” He described the military order to demolish buildings near the barrier as “unfair and [it] will give Israel the pretext to demolish thousands of other buildings near the wall.” Israel began to build the West Bank barrier in 2002 during a wave of Palestinian suicide bombings, and says there has been a significant decline in attacks since it was constructed.