AFP /Jerusalem An Israeli soldier was killed and two other people were wounded yesterday when a Palestinian carried out a stabbing and shooting attack... 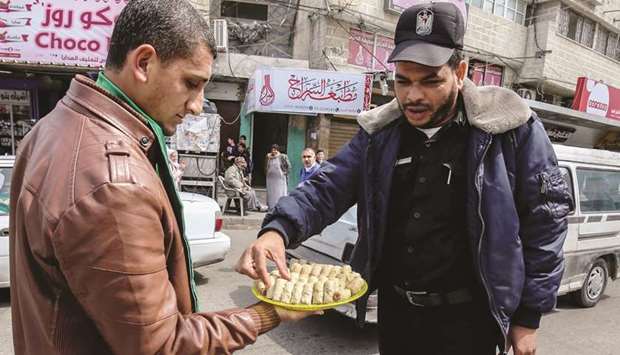 An Israeli soldier was killed and two other people were wounded yesterday when a Palestinian carried out a stabbing and shooting attack near a settlement in the occupied West Bank, the army said.

The attack came at a sensitive time ahead of Israel’s April 9 elections, and Prime Minister Benjamin Netanyahu vowed to apprehend the “fighters” behind it.

Hamas, the movement that runs the Gaza Strip, welcomed the attack, but did not claim responsibility for it.
“One Israeli is dead,” Israeli army spokesman Lieutenant Colonel Jonathan Conricus said of the attack near the Ariel junction southwest of Nablus.
The army later identified the victim as a soldier, Gal Keidan, 19. Another soldier was severely wounded from gunfire, the army said.
The other person wounded was a 47-year-old Israeli who lives in a nearby settlement, local officials said.
The hospital treating him said he was in critical condition.

The incident began with the perpetrator attacking a soldier with a knife at the Ariel junction, near an Israeli settlement by the same name, and snatching his weapon, Conricus said.

“That same fighter fired with that weapon toward three vehicles,” he said, with the third car targeted stopping.
“The fighter took the vehicle and used it to drive” to the nearby Gitai Avishar junction, where he opened fire and wounded another soldier, Conricus said.

The fighter then continued to the nearby Palestinian village of Bruqin.
“A manhunt is ongoing,” Conricus said. The army could not yet say whether it believed the Palestinian fighter was affiliated with a group or had acted alone.

Palestinian gun, knife or car-ramming attacks against Israeli settlers and soldiers occur sporadically in the West Bank.
Two soldiers were shot dead in a December 13 attack in the Ramallah area, and another shooting attack nearby on December 9 resulted in the death of a baby and wounded seven others.

Speaking at the beginning of the weekly cabinet meeting, Netanyahu said he was certain Israeli security forces would find those behind yesterday’s attack. “We will deal with them to the fullest extent of the law as we have done in all of the recent incidents,” the Israeli leader said.

Hamas called it a response to Israeli “crimes,” including its actions at Jerusalem’s Al-Aqsa mosque compound, the highly sensitive holy site where there have been scuffles in recent weeks. Hamas supporters could also be seen distributing sweets in the Gaza Strip to celebrate the attack.

The compound in Israeli-annexed east Jerusalem is the third-holiest site and a focus of Palestinian aspirations for statehood.
There have been scuffles in recent weeks between Palestinian worshippers and Israeli police over the use of a side building there known as the Golden Gate.

Yesterday, an Israeli court ordered the temporary closure of the side building.
Israeli officials are concerned tensions at the site could boil over and set off wider clashes ahead of the Israeli elections. There were no indications so far however that yesterday’s attack was linked to tension at the holy site.