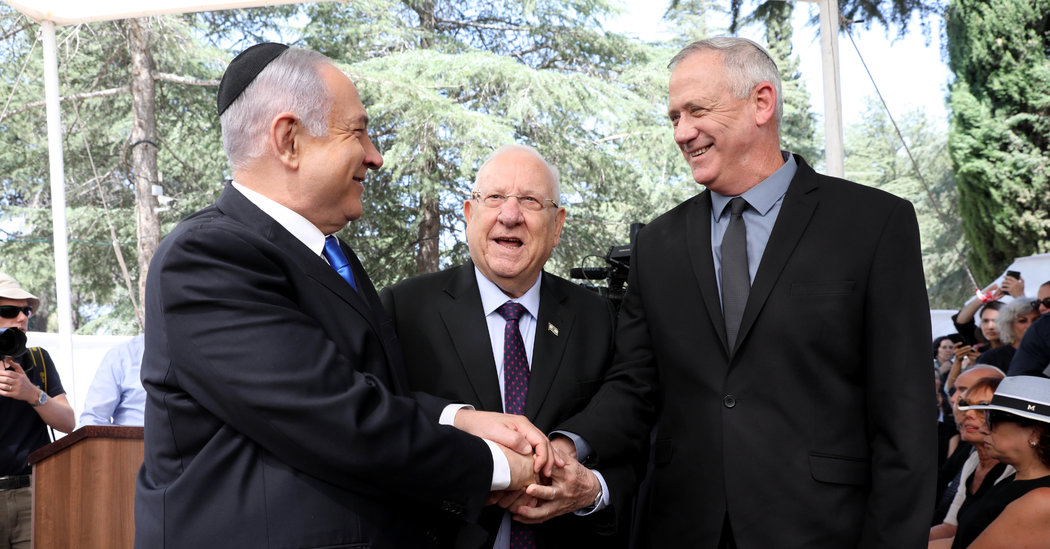 JERUSALEM — With Israel’s leaders stuck in postelection gridlock, President Reuven Rivlin invited Prime Minister Benjamin Netanyahu and his chief opponent, Benny Gantz, to meet at the president’s office on Monday evening in an effort to work out a power-sharing deal.

Mr. Rivlin’s role is largely ceremonial, but after last week’s inconclusive vote, it is up to him to decide who will get the first crack at forming a government and becoming prime minister.

“This is one of the rare instances where the president has a chance to be more than a rubber stamp,” said Gideon Rahat, a political scientist at the Israel Democracy Institute and the Hebrew University of Jerusalem.

A unifying and soothing voice whose office normally elevates him above Israel’s political and social fray, Mr. Rivlin has said his conclusion, based on the election results, was that the divided public had in essence voted for a government of national unity that includes both major parties — Mr. Gantz’s centrist Blue and White, and Mr. Netanyahu’s conservative Likud.

Mr. Netanyahu and Mr. Gantz are on board with the unity idea in general, but on different, and possibly mutually exclusive, terms.

Mr. Gantz has said that he would not join a coalition with Mr. Netanyahu as long as he is facing possible indictment in three corruption cases. He has also said that he wanted to form a broad, secular coalition, excluding ultra-Orthodox parties.

But Mr. Netanyahu met with his coalition partners from the right-wing and religious camps last week and promised that they would stick together in coalition negotiations. One of the ultra-Orthodox parties has vowed not to sit in a government with the no. 2 in Blue and White, Yair Lapid.

Ultimately, any arrangement between Mr. Gantz and Mr. Netanyahu would require a level of trust, Mr. Rahat said, that he said would be “difficult to build between them.”

The outcome may boil down to a fight over which of them would serve first under a possible agreement to rotate the premiership. “The entire conflict at the moment revolves around who will serve first as prime minister and who will serve second,” Avigdor Liberman, the leader of a secular nationalist party, said on Facebook Monday after meeting with Mr. Gantz.

Mr. Rivlin will receive the final, official results of the Sept. 17 election on Wednesday. He then has up to seven days to appoint a candidate, though he can do so sooner.

Mr. Rivlin, 80, an often jovial Likud veteran and former Parliament speaker, is known to be no fan of Mr. Netanyahu’s. The pair have a long history of personal and political rivalry. As party leader, Mr. Netanyahu tried to block Mr. Rivlin’s candidacy in the presidential election in 2014, even looking into the possibility of abolishing the presidency.

But Mr. Rivlin is considered fair and professional, and enjoys the public’s confidence. In Israel Democracy Institute surveys, the presidency consistently polls as Israel’s most trusted institution after the military.

The president’s call to Mr. Netanyahu and Mr. Gantz on Monday came soon after a parade of party representatives finished making their recommendations to Mr. Rivlin about whom they supported to form the next government.

Under the law, he can choose any elected lawmaker he believes has the best chance of forming a stable coalition, though traditionally the appointment has gone to the head of the party or alliance of parties with the most seats in Parliament.

Blue and White came out of the election with 33 seats, slightly ahead of Likud’s 31, but neither party gained enough support from smaller, allied parties to command a majority of 61 in the 120-seat Parliament.

By the end of their consultations with Mr. Rivlin, Mr. Netanyahu had the support of parties holding 55, compared with 54 for Mr. Gantz.

After an election in April produced similarly divided results, Mr. Rivlin tapped Mr. Netanyahu to form a governing coalition, but he was unable to, leading to a new vote this month.

In one of the many twists of this redo election, Arab lawmakers abandoned 27 years of noninvolvement and on Sunday recommended Mr. Gantz. They have no love of him and said they would not join in a government led by him, but they do want to unseat Mr. Netanyahu.

With its 13 seats, the Joint List, an alliance of predominantly Arab parties, momentarily gave Mr. Gantz’s parliamentary bloc the support of 57 lawmakers, but by Monday morning things had changed. Three lawmakers from the most hard-line party in the alliance opposed the recommendation, taking Mr. Gantz down to 54.

That shift fueled speculation that the Arab parties had reduced their support to help Mr. Gantz by letting Mr. Netanyahu have the first chance at forming a government, on the assumption he would fail and would be further weakened. But analysts warned that giving up the chance to go first would be extremely risky.

At a party meeting in Parliament on Monday, Mr. Netanyahu repeated his call for a unity government. After running a divisive campaign, he said unity required “an outstretched hand for true national reconciliation.”

An Israeli political reporter for the Walla news site, Tal Shalev, posted a reminder on Twitter on Monday that the law does not require Mr. Rivlin to appoint the head of the largest party, or the contender with the most recommendations.