Israeli police and Palestinian worshippers clashed at a flashpoint Jerusalem holy site on Sunday as overlapping Jewish and Muslim holidays led to tensions there.... 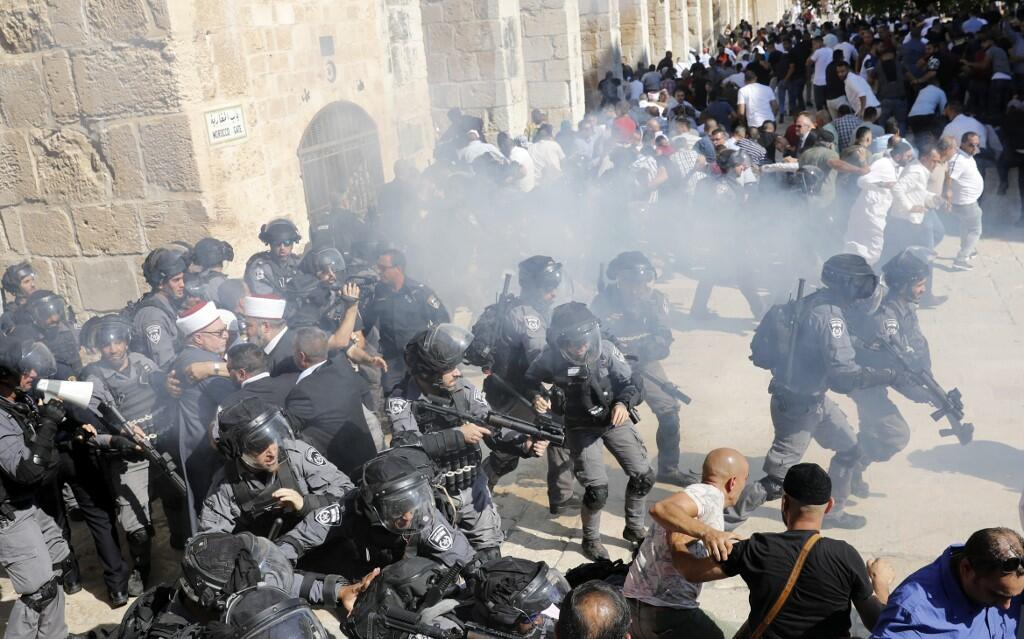 Israeli police and Palestinian worshippers clashed at a flashpoint Jerusalem holy site on Sunday as overlapping Jewish and Muslim holidays led to tensions there.

The Red Crescent reported 61 Palestinians injured, 15 of whom were taken to hospitals.

Sunday marked the start of the Muslim Eid al-Adha holiday and thousands of Palestinians prayed at the Al-Aqsa mosque.

It coincided with the Jewish Tisha B’av holiday, which typically sees an increase in Jewish visits to the holy site.

Israeli police had initially barred entry to Jewish visitors, but reversed their decision after the clashes broke out and allowed them to enter. Several dozen entered the site under close police escort and Palestinian worshippers began throwing chairs and other objects at the group.

The Muslim Waqf organisation, which administers the holy compound, said some 1,300 Jews visited the site on Sunday.

Jordan, the site’s custodian and one of only two Arab countries with a peace treaty with Israel, condemned Israel’s “continuous violations” there.

Yehuda Glick, a former Israeli parliament member and a prominent campaigner for greater Jewish access to the site, accused Palestinian worshippers of provoking the clashes.

Jews are barred from praying at the compound under a longstanding arrangement between Israel and Muslim Waqf authorities. Jewish tradition also maintains that Jews should avoid entering the holy site.

But in recent years Israeli religious nationalists have stepped up visits to the site to challenge the arrangement. Jewish extremists have called for destroying the mosque and rebuilding the Biblical temple.

The Palestinians view such visits as provocations, and have long feared that Israel intends to take over the site or partition it. The Israeli government has repeatedly said it has no intention of changing the status quo.

The compound, which includes the Al-Aqsa mosque and the Dome of the Rock, is one of the most sensitive sites in the Israeli-Palestinian conflict.

It is the third-holiest site in Islam and the most sacred for Jews, who revere it as the location of the two biblical-era temples.

It is located in East Jerusalem, occupied by Israel in the 1967 Six-Day War and later annexed in a move never recognised by the international community.