Israelis have begun voting in an unprecedented repeat election – which will see prime minister Benjamin Netanyahu battle to retain power for a fifth... 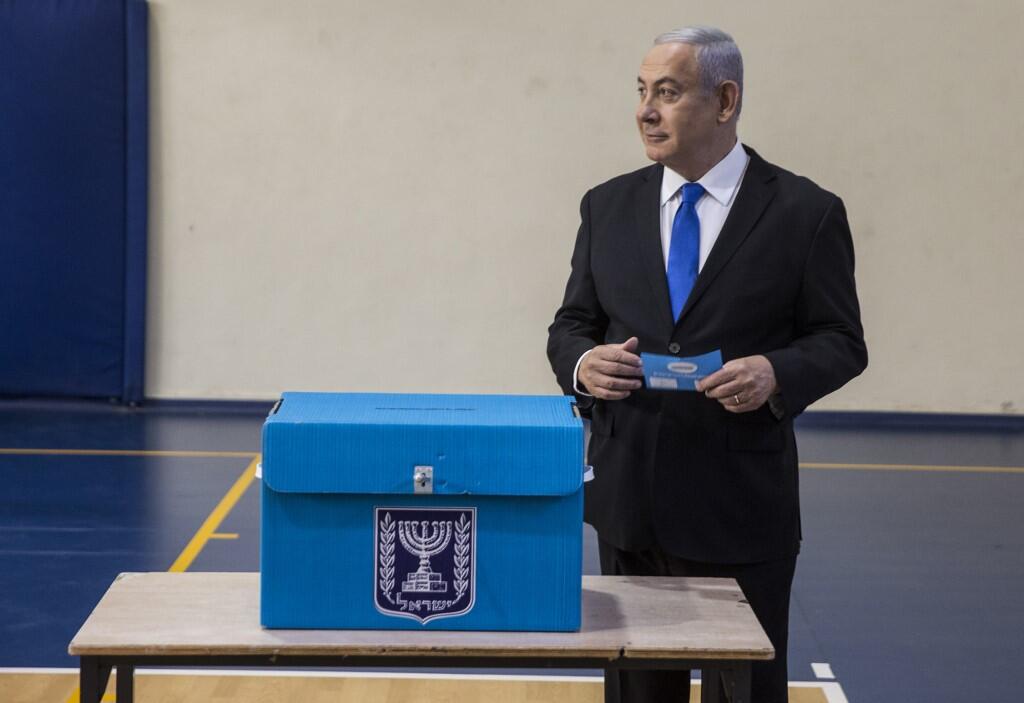 Israelis have begun voting in an unprecedented repeat election – which will see prime minister Benjamin Netanyahu battle to retain power for a fifth term.

Last night, Netanyahu urged Israelis not to waste the national holiday at the beach, the market, or – as a clip of a couple’s feet intertwining beneath the sheets suggests – having election-day sex.

The clip, posted to Netanyahu’s Twitter account, ended with a warning to those who weren’t planning to vote: ‘The left is getting ready to take over the government’.

Netanyahu, the longest serving leader in Israeli history, is seeking a fourth consecutive term in office in Tuesday’s election.

He faces a strong challenge from retired military chief Benny Gantz, whose centrist Blue and White party is running neck and neck with Netanyahu’s Likud.

Both parties could struggle to form a majority coalition with smaller allies, however, forcing them into a potential unity government.

Netanyahu has tried to portray himself as a statesman who is uniquely qualified to lead the country through challenging times.

Gantz seeks to paint the prime minister as divisive and scandal-plagued, presenting himself as a calming influence and an honest alternative.

The vote marks their second showdown of the year, after drawing even in the country’s previous election in April.

Netanyahu appeared poised to remain in office at the time, with his traditional allies of nationalist and ultra-religious Jewish parties controlling a parliamentary majority.

Without a parliamentary majority, Netanyahu dissolved parliament and called a new election.

Opinion polls have forecast similar results this time around, potentially putting Lieberman in the role of kingmaker.

The performance by the Soviet-born politician’s Yisrael Beitenu party is just one of the factors that could determine Netanyahu’s future. Several small parties are fighting to squeak past the minimum 3.25 per cent threshold for entering parliament.

The performances of these parties could make or break Netanyahu’s ability to form a coalition. Heavier turnout by Arab voters, many of whom stayed home in April, could also hurt Netanyahu.

The Israeli leader is desperate to secure a narrow 61-seat majority in parliament with his hard-line religious and nationalist allies who are expected to approve legislation that would grant the prime minister immunity from prosecution.

With his career on the line, Netanyahu has campaigned furiously and taken a late hard turn to the right in hopes of rallying his nationalist base.

On Monday, Netanyahu vowed to annex ‘all the settlements’ in the West Bank in an attempt to win nationalist support ahead of the election.

‘I intend to extend sovereignty on all the settlements and the settlement blocs,’ he told Israeli Army Radio, ‘including sites that have security importance or are important to Israel’s heritage’.

Asked if that included the hundreds of Jews who live under heavy military guard amid tens of thousands of Palestinians in the volatile city of Hebron, Netanyahu responded: ‘Of course.’

Netanyahu has made a series of ambitious pledges in a bid to whip up support, including a promise to annex the Jordan Valley, an area even moderate Israelis view as strategic but which the Palestinians want as part of a future state.

The move alarmed Middle Eastern nations, European powers and Arab foreign ministers, with critics insisting his pledges, if carried out, would inflame the Middle East and eliminate any remaining Palestinian hope of establishing a separate state.

Speaking in Jeddah on Sunday, Turkey’s foreign minister Mevlüt Çavuşoğlu said Netanyahu’s ’embarrassing’ annexation plan was a ‘despicable’ attempt to earn votes ahead of the election, and criticised what he called a lack of reaction from other Muslim countries.

‘Israel, encouraged by the support of certain countries, is continuing its aggressive policies that are turning it into a racist, apartheid regime,’ Cavusoglu said.

‘If the whole Muslim community had reacted together, the reckless plans, policies and behaviour of the United States and Israel would never have reached this point’.