US-led maritime/aviation alliance to discuss protection of vessels from Iranian threat while in Gulf An Israeli Foreign Ministry delegation is headed to Manama to... 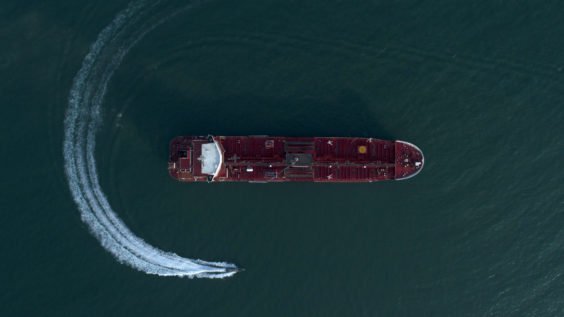 An Israeli Foreign Ministry delegation is headed to Manama to participate in a conference of members of the Working Group on Maritime and Aviation Security, an alliance established by the United States to protect trade in the Gulf.

The October 21-22 initiative, hosted by Bahrain in conjunction with the US and Poland, stems from a conference held in Warsaw last February that was attended by top officials from some 60 nations, the goal being to seek ways to attain stability in the Middle East.

A less formal gathering on maritime security was held in Bahrain on July 31 to discuss specific incidents in the Gulf taking place at around that time. One of those incidents involved Iran’s impounding of the Stena Impero, a British-flagged tanker transiting the strategic Strait of Hormuz.

The latest conference will have representatives from most of the 60 countries represented in Warsaw, including Saudi Arabia, the United Arab Emirates and Israel, as well as Australia and Britain.

The US has been working to get more countries to join the security coalition, but some, such as Japan, have resisted, fearing a wider confrontation with Iran, which has expressed objections to the presence of foreign forces in the Gulf.

Lior Akerman, a former senior official in Israel’s Shin Bet security service and today a political and security analyst, told The Media Line that involvement in the conference is part of an effort by Israel to strengthen its relationship with Arab states that are also concerned about the threat posed by Iran.

“Israel’s participation is a political move, not a military one,” Akerman said.

He noted that from a military and commercial point of view, Israel has no direct interest in fighting the Iranians in the Gulf. Therefore, the assumption is that Israel’s contribution will mainly be in technology, intelligence and the provision of a land base for American forces.

“This cooperation has the benefit of showing the world that Israel is not afraid to confront Iran,” he said.

In August, Israeli Foreign Minister Israel Katz revealed that Israel would participate in the Bahrain conference as part of its attempt to counter Iranian expansionism while boosting ties with Sunni Arab nations.

About a third of the world’s oil supply passes through the waters in question.

Oraib Rantawi, founder and director of the Amman-based Al Quds Center for Political Studies, told The Media Line that normalization with Israel is the primary goal of the gathering.

“The main purpose of the American initiative isn’t security of navigation in the Gulf, but to give additional impetus to the process of normalization between Israel and the Gulf states,” he said.

Rantawi noted that Israel is not located in the Gulf region or directly affected by events there, adding that the area’s security has never been an Israeli priority.

“The alliance suggests that Israel is a reality in the Arab region as a normal state, whether or not a political solution is provided to the Palestinians or they achieve their basic rights,” he stressed.

Rantawi stated that the Sunni Gulf states realize they can receive international protection in the region by being friends with the Israelis.

“These states violate human rights in Yemen and against their own people, in the ugliest ways possible. They are taking shelter from accountability through their relationship with Israel, which spares them stormy international and American reactions to their crimes,” he claimed.

Rantawi also said that the US has no interest in starting a war with Tehran, but rather is seeking to use the Iranian “scarecrow” in order to financially blackmail the Gulf states while achieving the normalization of relations with Israel.

“The US is managing the crisis in a way to take full financial advantage of the Gulf,” he charged. “The security of the Strait of Hormuz requires political solutions. Therefore, the Gulf states must emerge from the state of American blackmail and move toward direct dialogue with Iran.”

On October 14, Abdullah Al-Khalifa, Bahrain’s ambassador to Washington, published an article in The Washington Post in which he wrote: “The [security] coalition comes at a critical time, as recent attacks on major shipping routes in the Gulf, especially in the Strait of Hormuz, undermine the safety of navigation and create instability in the region.”

The Trump Administration has accused Iran of attacks on a total of six vessels in the Gulf, and of using its proxy forces to target American assets in Iraq, as well as civilian infrastructure in Saudi Arabia. Iranian President Hassan Rouhani responded by warning that a conflict with Tehran would lead to the “mother of all wars.”

Following Washington’s exit last year from the 2015 multilateral nuclear deal with Iran, the US reinstated sanctions on Tehran, including on its oil exports. The Islamic Republic has called the sanctions “economic terrorism.”