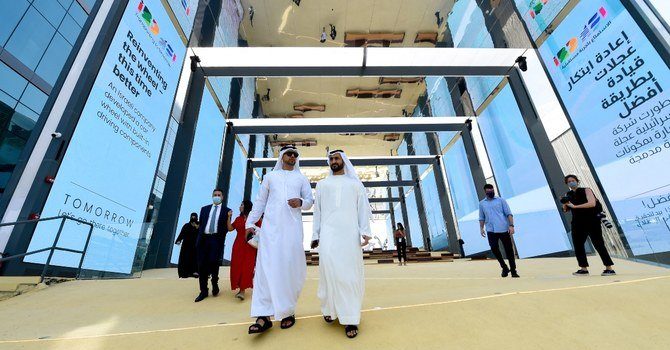 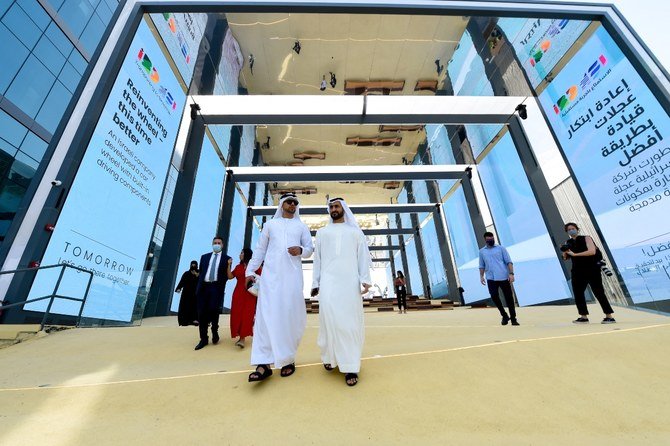 The audience of around 250 guests reveled in the Pavilion’s inauguration in the 15-meter high and 1,550-sqm open trapezoidal steel paneled structure with a mount resembling the shape of sand dunes and sheltered Middle Eastern streets.

Located in the Opportunity district, the pavilion was designed by Knafo Klimor Architects before the Abraham Accords and before the pandemic.

It draws its inspiration from the arid landscapes of Israel and other countries in the Middle East.

It also features a large sign with the words “Toward Tomorrow” written in intertwined Arabic and Hebrew letters — a font known as “Aravrit” invented by Israeli typographer, Liron Lavi Turkenich featuring a hybrid of two local scripts, combining Hebrew and Arabic characters.

Its message recalling the theme of Expo 2020: “Connecting Minds and Creating the Future.”

“We wanted this pavilion to be very inviting and we want to show that what unites us is bigger than what divides us,” pavilion spokesman Menachem Gantz told Arab News.

“We are trying to show our similarities with other Arab countries. We are part of the Middle East. We have the same dunes, we have the same sand, and we face the same environmental challenges.”

Guests can journey up the “sand dune” style walkway into an open-air structure that resembles, according to Elazar Cohen, commissioner general of Israel for Expo 2020 Dubai, “an open tent.”

Inside, on the lower level in the main hall of the pavilion, is a 360-degree immersive show plays on a 250-sqm screen, presenting Israeli landscape, culture, arts, and expertise in innovation.

“From our history to the landscape of our countries, there are many similarities,” he told Arab news.

“That’s why we decided to design the pavilion as an open tent, to welcome visitors to Israel and provide a place of comfort. From the feedback we’ve been receiving especially from Arabic visitors to the pavilion, we are achieving just that, reminding people how much we have in common as nations.”

Expo 2020 marks a series of firsts. It is the first time the global event has ever taken place in an Arab country, the first time that every participating country has its own pavilion, and in many ways, it constitutes another first for Israel on Arab soil.

Until September 2020, it would have been unthinkable that Israel would be able to participate in an event in the UAE.

Until just over a year ago, when Israel and the UAE signed the historic Abraham Accords, Israel had no official ties with any country in the Gulf.

In the lead-up to the signing of the Accord, Israel received an invitation to participate in Expo 2020 Dubai, in April 2019 — around 18 months prior to its official normalization with the UAE.

“We received the invitation later than other countries and had just a year-and-a-half to prepare for October 2020,” added Gantz.

“Having an Israeli booth on UAE soil just a year after signing the Abraham accords is a huge move forward in relations between our countries,” Yoel Razvozov, Israel’s Minister of Tourism, told Arab News.

“The Abraham accords are unprecedented and represents a new chapter in the history of peace process in the Middle East.”

The evening began with a traditional Mezuzah ceremony performed by Rabbi Duchman.

According to tradition, a Mezuzah, which means “doorpost” in Hebrew, is to be hung on one of the most important doorways of your home.

The Pavilion’s Mezuzah Case was made and designed exclusively for Expo 2020 Dubai by renowned Judaica artist David Roytman.

Israelis hope the pavilion will drive a mutual increase in tourism and business to both Israel and the UAE.

According to Dubai custom’s figures, the first five months since the signing of the Abraham accords saw bilateral trade amounting to $250 million.

Israel and the UAE recently announced a mutual visa waiver memorandum to enhance tourism and business for both countries.

This year, in May, Israel participated in the Arabian Travel Market, the Middle East’s most significant travel and tourism exhibition.

According to Razvozov, Israel will welcome around 100,000 visitors from the UAE annually once borders between the two countries are fully opened, and travel restrictions due to Covid-19 are lifted.

For Israel, tourism and establishing cultural understanding between Israel and other Arab countries is the way to maintain not only diplomatic relations, but peace and work to a new future.

“Peace is maintained through mutual learning and recognition between people,” said Razvozov in his opening remarks.

“In this context, tourism serves this goal in the best way. Tourism allows us to explore, learn from and accommodate each other. Tourism will build a human bridge to peace.”

Gantz stressed how the pavilion was not about forgetting the past or forgetting the hardships that have taken place, but about moving forward and establishing a new future with the Arab world.

“Diversity for Israelis symbolizes strength, and we want to celebrate this,” he said.

“We are asking you for a dialogue, where you can come to the pavilion, and we can get to know each other.”