For the first time in 38 years, Israel has attacked Iraqi territory, striking two major Shiite militia camps and courting an escalation with Tehran.... 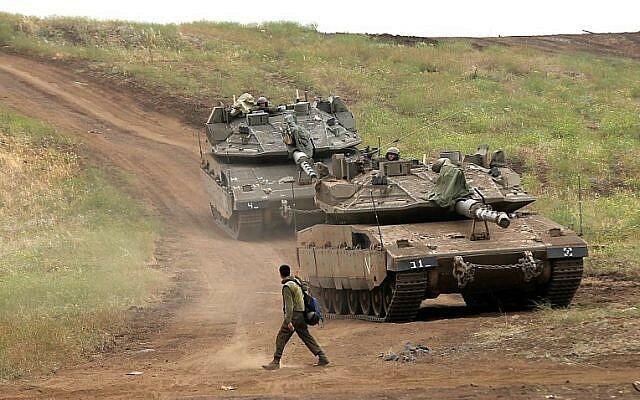 For the first time in 38 years, Israel has attacked Iraqi territory, striking two major Shiite militia camps and courting an escalation with Tehran.

Israel launched airstrikes in Iraq last month in the wake of a crucial trilateral meeting between Moscow, Washington and Tel Aviv which took place in Jerusalem in late June. The strike hit  two bases of Iran-backed Shiite militias.

Although Tel Aviv didn’t claim responsibility for the raids, nor did Baghdad accuse them of doing so, security analysts argue that ever since Iran deployed in Iraq, the latter has became the target for Israel.

Mehmet Bulovali, an Iraqi-Kurdish political activist who served as an advisor to Iraq’s former vice president Tariq al Hashimi, told TRT World that to attack Iran-run militias in Iraq, Tel Aviv had waited for an American nod for several years, while Tehran had also been anticipating such a military challenge.

“But this stance has changed after the crucial trilateral meeting, which was about how to secure Israel’s security in Iraq and Syria, in Jerusalem. After this meeting, Israel got the permission from Washington to hit Iraq,” Bulovali said.

Last month’s Israeli attack on Iraqi territory took place in Amerli in Salah al Din province, and at Camp Ashraf, which formerly served as a US military base in Diyala province. Both provinces are located in central Iraq, bordering the Kurdish-populated region.

The attacks were first reported by Al Ain, one of the UAE’s websites, and they were attributed to Israel by Sharq al Awsat, a Saudi media outlet.

Following the ‘the-enemy-of-my-enemy-is-my-friend’ doctrine, both the UAE and Saudi Arabia have developed friendly relations with Israel, with an aim to counter Iran.

“Since the US withdrawal from the nuclear deal last year, Iran has been preparing itself in different places against [US-Israeli alliance],” said Bulovali. “And Iraq is one of the places, where Iran has deployed missile launching platforms and missile factories.”

The strikes killed at least 40 people, most of whom belonged to Iraq’s powerful Shiite militias of Badr Organisation and Hashd al Shaabi, which are patronised by Iran. Two of the dead men were also members of Iran’s Revolutionary Guards, according to Bulovali’s account.

Due to the expanding Israeli threat towards Tehran in Iraq, Iran has placed its missile factories and launching pads underground, changing the locations of ammunition depots belonging to the Hashd al Shaabi Iraqi Shiite militia armed and funded by Iran, Bulovali said.

Iran will not respond to attacks directly, but it might retaliate by using its Shiite proxies in the Middle East, Bulovali said. But he also thinks that after the US pull-out from the nuclear deal, a new political equation has been developing in the region and making it difficult for anyone to make bold moves against other states except for pinpointed operations like the ones recently conducted by Israel.

Mehmet Alaca, a Turkish researcher, who wrote a thesis on Hashd al Shaabi at Exeter University, said there are two main reasons behind the attacks.

“First, these camps were the places from which Iran’s Revolutionary Guards were coordinating their operations in Syria, Iraq, Yemen and Lebanon,” Alaca told TRT World.

“Second, the militias, which hesitate Israel most in Syria, have been trained in these two camps according to various sources,” Alaca said. The camps are the biggest in the region, according to Alaca.

He also thinks that by targeting the Camp Ashraf, which has a distance of 40km from Baghdad, Iraq’s capital, and a distance of 80km from Iranian border, Israel sends a clear message to Iran about its long-range military strike capabilities.

However, even more puzzlingly than the motives for the attacks is the fact that Iraq has not acknowledged or condemned Israeli raids in the way the Assad regime does whenever there are Israeli raids conducted on Syrian soil.

“More interestingly, Iraq has not showed any response to the attacks at all,” Alaca said. “There has been a process of rapprochement between Israel and Iraq since last year,” he added.

According to European diplomats, Israeli officials have been secretly meeting with their Iraqi counterparts for sometime and some of the meetings have even taken place in Israel.

Some Iranians also suspect that the meetings aim to normalise relations between Iraq and Israel, citing other high-profile visits from Iraqis to Israel, such as Nadia Murad, who was awarded the Nobel Peace Prize in 2018, and Lamiya Aji Bashar, the receiver of the Sakharov Prize in 2016.

“There are objective reasons that may require establishing relations between Iraq and Israel, including that there is an important Iraqi community in Israel, who still cherish their Iraqi characteristics and traditions, especially in weddings and other events,” said Fareed Yasseen, Iraq’s Ambassador to the US, in a recent statement.

Ali Mousavi Khalkhali, an Iranian journalist, suspected that Baghdad “implicitly allowed Israel to attack its soil”, as a result of Iraq’s developing relations with Israel.

But an Israeli commentator also thought that the attack on an Iranian-run camp on Iraqi soil could increase Tehran’s pressure over Baghdad, creating a “boomerang” effect, which could persuade the war-torn country “to serve as Iran’s shield” against Tel Aviv.