Rep Ilhan Omar speaks about Trump administration policies towards Muslim immigrants at a news conference outside the US Capitol in Washington, DC, April 10,... 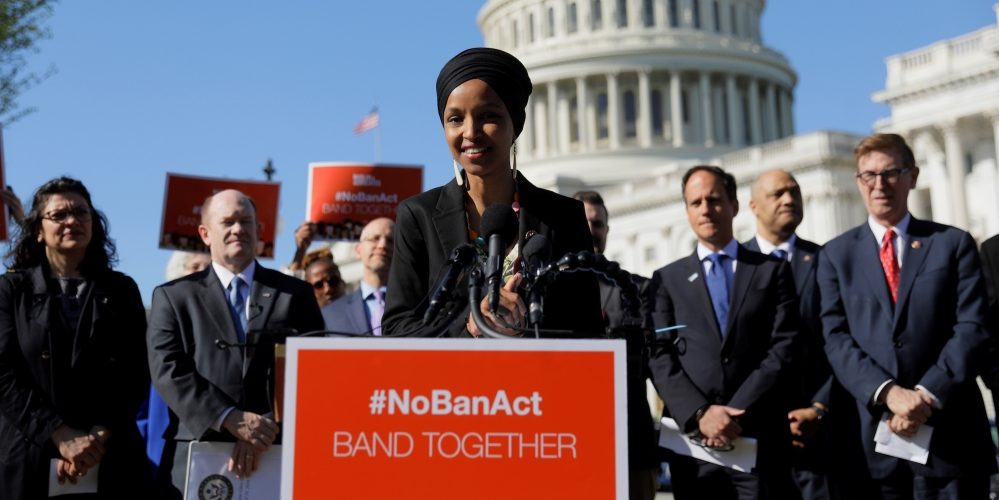 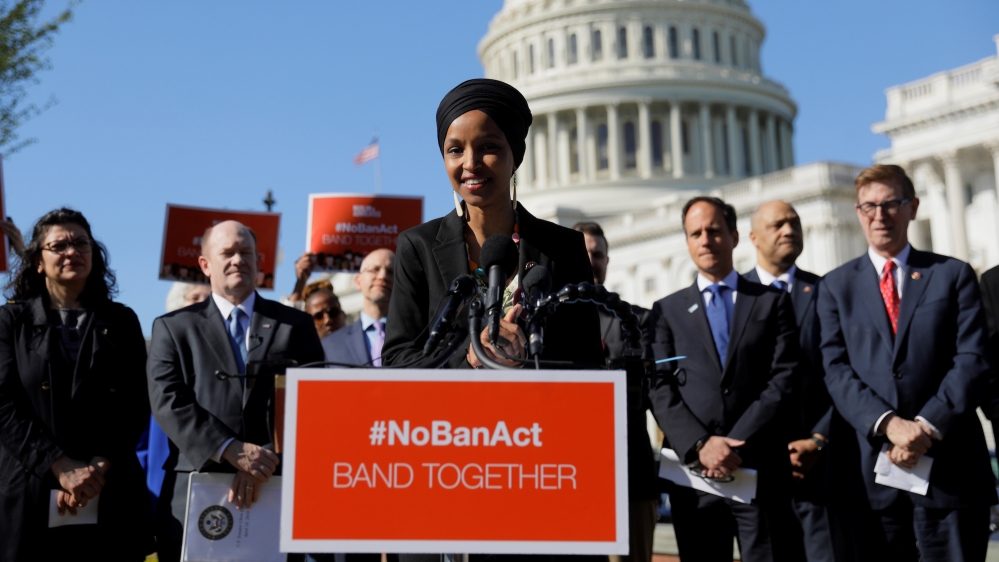 Rep Ilhan Omar speaks about Trump administration policies towards Muslim immigrants at a news conference outside the US Capitol in Washington, DC, April 10, 2019 [File: Jim Bourg/Reuters]

On July 16, Somali-American Minnesota Representative Ilhan Omar, together with Representatives John Lewis and Palestinian-American Rashida Tlaib, introduced bill HR-496 which is meant to affirm Americans’ “right to participate in boycotts in pursuit of civil and human rights at home and abroad, as protected by the First Amendment to the Constitution”.

Though not explicitly mentioned, HR-496 is at least partially inspired by the ongoing legislation targeting the Boycott, Divestment and Sanctions (BDS) movement against Israel.

A day later, Omar announced plans to visit Israel and the occupied Palestinian territories in August together with Tlaib. It did not take long for Israel to react. While officially Tel Aviv, through its ambassador in the United States Ron Dermer, has indicated that “out of respect for the US Congress and the great alliance between Israel and America”, the two congresswomen will be allowed into the country, unofficially the Israeli government is trying to bar them from entering Israel.

Last week, the Israel Law Center (ILC), also known as Shurat HaDin, a self-declared NGO, appealed to the Jerusalem District Court to prevent Omar and Tlaib from gaining entry into Israel and the occupied Palestinian territories due to their support for the constitutionally-protected right to engage in BDS.

The ILC bases its case on Amendment No 28 to the Entry Into Israel Law, which prohibits entry of any foreigner who makes a “public call for boycotting Israel” or “any area under its control”.

Contrary to the ILC’s claims of being a non-governmental organisation, WikiLeaks documents show it has worked closely with the Israeli government and as a Mossad and Israel National Security Council proxy. The group sued the Palestinian Authority (PA) for damages due to “terrorist attacks” and litigated “states that support terror”, such as Iran and Syria for links to Hamas. It has also engaged in “lawfare” targeting Palestinian solidarity activists around the world.

So why is the Israeli government “outsourcing the problem” to an NGO?

Birds of a feather

Israel’s flip-flopping on the matter of Omar and Tlaib’s entry is far from accidental. The involvement of the ILC as a so-called NGO enables the Israeli government to avoid direct accountability for its racist, diplomatically controversial targeting of an elected US official while setting a precedent against prominent BDS supporters.

Further, it degrades Omar and Tlaib as Muslim women and as American elected officials while sidestepping potential diplomatic embarrassments Donald Trump as president would need to address. Thus, Israel is working in tandem with the White House to target and humiliate Omar and Tlaib, both outspoken critics of American and Israeli policies in general, and Trump and Prime Minister Benjamin Netanyahu, in particular.

In fact, Dermer’s reference to the “great alliance between Israel and America” is based on a common settler colonialist, white supremacist ethos and ensuing criminality, with elementary, continued and ever-growing embrace of far-right leaders and xenophobia.

Accordingly, Israel and the United States work similarly and synergistically, employing reactionary tactics to suppress dissent and ensure dominance of a ruling class over “others” – black and brown people, women, indigenous groups, LGBTQI, Muslims, disabled people and intersectional political opponents of all varieties, including Jews – whom they scapegoat as a means to distract from personal corruption and capitalist looting of the public sphere.

Israel’s racist policies inspire Trump and his xenophobic ambitions, as encapsulated by his senior policy adviser arch-Zionist Islamophobe Stephen Miller. Historically, Israel’s foundations are built on a Zionist, ie racist and white supremacist entry prohibition – expelling and then banning indigenous Palestinian people from returning to their lands, while enshrining the 1950 Law of Return, which provides all Jews with the right to Israeli citizenship, regardless of country of origin. Further, Israel regularly employs entry bans and deportations against pro-Palestinian and human rights activists, such as Professor Noam Chomsky and, recently, Omar Shakir of Human Rights Watch (HRW).

Likewise, entry bans have been cynically used by the Trump administration on numerous occasions to advance reactionary and criminal objectives. Examples include a sweeping ban on residents from various Muslim countries, a “zero tolerance” immigration policy, which has led to concentration camps and thousands of family separations, and the targeting of members of the International Criminal Court (ICC) seeking to investigate potential American war crimes in Afghanistan or one of the many global locales where the US projects its imperialist ambitions.

The ILC’s request to bar Congresswoman Omar is merely the latest episode of an ongoing campaign involving Zionists, corporate Democrats, and Republicans, including Trump, his lackeys in Congress and white supremacist minions.

The campaign against Omar is part of an effort to subdue, marginalise and fragment the increasingly energised progressive wing of the Democratic Party, which constitutes a substantial threat to the status quo.

Consequently, Omar and “the squad” have come under fire from both old-guard corporate Democrats, like House Speaker Nancy Pelosi, and Republicans, including Trump himself, all fearful of substantial losses in power.

Furthermore, as part of an effort to alienate racist white people from the Democratic Party and gain voters for himself, Trump has consistently smeared Omar and her fellow women of colour of “The Squad” and equated them with the Democratic Party as a whole. Thus, Trump seeks to polarise American society, using race and class constructs to divide and rule, preferably by inciting violence – or tacitly encouraging violence by not condemning it, which would play into his hands leading up to the 2020 elections.

Behind the attacks on Congresswoman Omar also lies a deep-seated fear of the ascension of Senator Bernie Sanders, whose 2016 presidential campaign inspired a growing awareness of progressive issues, which likely propelled an array of groups and politicians into action and power, including members of “The Squad”.

Trump, in particular, has reason to worry, as head-to-head polling data show Sanders consistently beating him in the 2020 elections. Sanders’s campaign continues to build momentum as the independent senator vocalises dismay over Trump’s racism and corporatist agenda, including tax cuts for the wealthy and catering to the military-industrial complex.

With a signature Brooklynite Jewish accent and conveying a liberal Zionist stance himself, Sanders skipped the American Israel Public Affairs Committee (AIPAC) meeting, and recently stated that as president he would consider withholding aid to Israel as leverage to change its behaviour towards Palestinians, which he condemned as “racist”.

Zionists, Republicans and other reactionaries fear a convergence of intersectional forces, which would challenge the propaganda and agenda of the capitalist white supremacist patriarchy. Therefore, powerful intersectional representatives, such as members of “the Squad” are often tarnished and marginalised.

The offensive on Omar, which was duplicitously spearheaded by American “liberal” Zionists, shows an uncanny resemblance to a Zionist campaign against another intersectional voice – Corbyn supporter Jackie Walker – the now-expelled UK Labour Party activist and Jewish progressive woman of colour on trumped-up charges of “anti-Semitism”.

Congresswomen Omar and Tlaib plan to visit Israel and the occupied Palestinian territories outside the traditional Zionist-sponsored propaganda tour for US politicians. They wish to meet Palestinian leaders and civil society to learn about their struggles and find common ground on which cross-boundary alliances can be forged and strengthened, such as between Palestine and Black Lives Matter.

A visit to the occupied Palestinian territories in general and to Gaza, the largest open-air prison on Earth, in particular, would go a long way in countering Zionist propaganda, which villainizes all Palestinians. Israeli forces kill and injure non-violent Palestinian protesters regularly at the Great March of Return, including children, medics and journalists without significant resistance from Europe or the US.

Omar and Tlaib have a unique opportunity to exemplify the power of intersectional solidarity by embracing Palestinian activists and supporters of BDS, assisting to expose Israeli criminality. Their presence in Gaza alongside Palestinians at the Great March of Return would be a watershed moment for all oppressed people.