American forces and their Kurdish-led partners in Syria had been conducting as many as a dozen counterterrorism missions a day against Islamic State militants,... 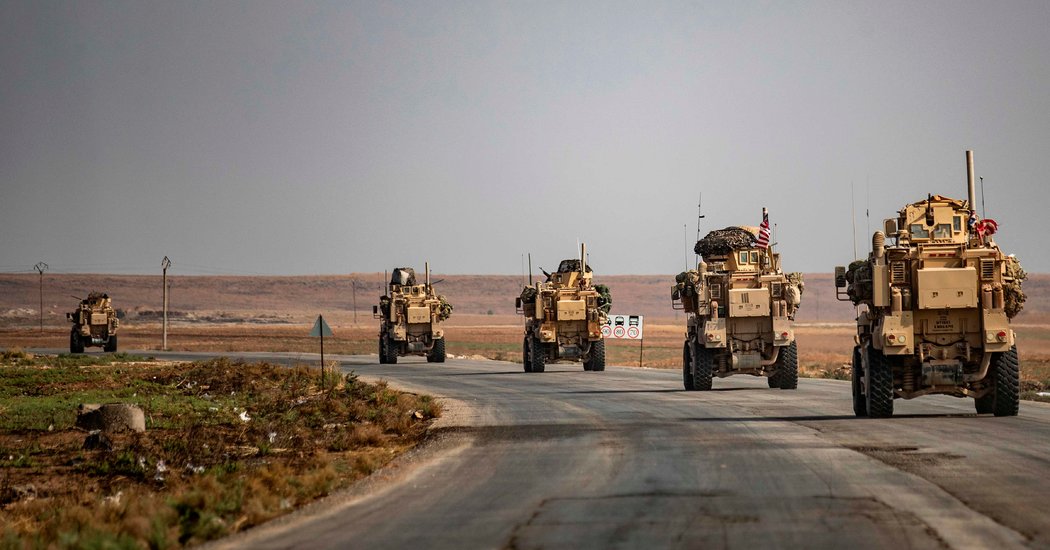 American forces and their Kurdish-led partners in Syria had been conducting as many as a dozen counterterrorism missions a day against Islamic State militants, officials said. That has stopped.

Those same partners, the Syrian Democratic Forces, had also been quietly releasing some Islamic State prisoners and incorporating them into their ranks, in part as a way to keep them under watch. That, too, is now in jeopardy.

And across Syria’s porous border with Iraq, Islamic State fighters are conducting a campaign of assassination against local village headmen, in part to intimidate government informants.

When President Trump announced this month that he would pull American troops out of northern Syria and make way for a Turkish attack on the Kurds, Washington’s onetime allies, many warned that he was removing the spearhead of the campaign to defeat the Islamic State, also known as ISIS.

Now, analysts say that Mr. Trump’s pullout has handed the Islamic State its biggest win in more than four years and greatly improved its prospects. With American forces rushing for the exits, in fact, American officials said last week that they were already losing their ability to collect critical intelligence about the group’s operations on the ground.

“There is no question that ISIS is one of the big winners in what is happening in Syria,” said Lina Khatib, director of the Middle East and North Africa Program at Chatham House, a research center in London.

Cutting support for the Syrian Democratic Forces has crippled the ability of the United States and its former partners to hunt down the group’s remnants.

News of the American withdrawal set off jubilation among Islamic State supporters on social media and encrypted chat networks. It has lifted the morale of fighters in affiliates as far away as Libya and Nigeria.

And, by removing a critical counterforce, the pullout has eased the re-emergence of the Islamic State’s core as a terrorist network or a more conventional, and potentially long-lasting, insurgency based in Syria and Iraq.

Although Mr. Trump has repeatedly declared victory over the Islamic State — even boasting to congressional leaders last week that he had personally “captured ISIS” — it remains a threat. After the loss in March of the last patch of the territory it once held across Syria and Iraq, the Islamic State dispersed its supporters and fighters to blend in with the larger population or to hide out in remote deserts and mountains.

The group retains as many as 18,000 “members” in Iraq and Syria, including up to 3,000 foreigners, according to estimates cited in a recent Pentagon report. Abu Bakr al-Baghdadi, the Islamic State’s self-proclaimed caliph, is still at large.

“Our battle today is one of attrition and stretching the enemy,” Mr. al-Baghdadi declared in a video message released in April. Looking comfortable and well fed, he sat on the floor of a bare room, surrounded by fighters, with an assault rifle by his side.

“Jihad is ongoing until the day of judgment,” he told his supporters, according to a transcript provided by SITE Intelligence Group.

Against the benchmark of the Islamic State’s former grip on a broad swath of geography, any possibility of a comeback to that extent remains highly remote.

Changes in the political context in Syria and Iraq have diminished the Islamic State’s ability to whip up sectarian animosity out of the frustrations of Sunni Muslims over the Shiite or Shiite-linked authorities in Syria and Iraq — the militants’ trademark.

The government in Baghdad has broadened its support among Sunni Iraqis. President Bashar al-Assad of Syria, by crushing the revolt against him, has left Sunni militants less space to mobilize. And many Syrians and Iraqis who lived under the harsh dominion of the Islamic State strongly oppose its return.

But as an underground insurgency, the Islamic State appears to be on the upswing.

Militants have been carrying out “assassinations, suicide attacks, abductions, and arson of crops in both Iraq and Syria,” according to a report this summer by the Pentagon inspector general for operations against the Islamic State. It is establishing “resurgent cells” in Syria, the report said, and “seeking to expand its command and control nodes in Iraq.”

The militants have been burning crops and emptying out whole villages. They have been raising money by carrying out kidnappings for ransom and extorting “taxes” from local officials, often skimming a cut of rebuilding contracts.

Their attacks on village headmen — at least 30 were killed in Iraq in 2018, according to the Pentagon report — are an apparent attempt to scare others out of cooperating with Baghdad.

“The high operational tempo with multiple attacks taking place over a wide area” may be intended to create the appearance that the Islamic State can strike anywhere with “impunity,” the report said.

Mr. Trump first said in December 2018 that he intended to withdraw the last 2,000 American troops from Syria; the Pentagon scaled that back, pulling out about half of those troops.

Military officials, though, say that helping the Syrian Democratic Forces hunt down underground cells and fugitive fighters required more training and intelligence support than an open battle for territory. Even the partial drawdown, the Pentagon inspector general’s report found, could be “detrimental” to the American mission in Iraq and Syria.

Last month, as if to prove its continued vitality, the Islamic State claimed responsibility for a minibus bombing that killed a dozen people near the entrance to a Shiite pilgrimage site in the Iraqi city of Karbala. It was its deadliest attack since the loss of its last territory.

And within hours of Mr. Trump’s announcement almost two weeks ago that American forces were moving away from the Syrian border with Turkey, two ISIS suicide bombers attacked a base of the Syrian Democratic Forces in the Syrian city of Raqqa.

“The crusaders have given up,” Islamic State supporters crowed, according to Laith Alkhouri of the business risk consulting company Flashpoint Global Partners, who monitors the group’s online messages.

The missions against the Islamic State conducted by the Syrian Democratic Forces — sometimes as many as two dozen a day — had included both counterterrorism patrols and raids on militant cells. Some were carried out jointly with American soldiers, others alone, according to United States officials.

But the Kurds, an ethnic minority sometimes disparaged by Arab Syrians, faced resentment among the Arab residents of northeastern Syria.

In part to try to win support from those communities, the Kurdish-led forces pardoned and released hundreds of detained ISIS fighters or supporters in so-called reconciliation deals, relying on informal relationships with community leaders to handle their reintegration.

The Kurdish-led militia even incorporated some of the released Islamic State detainees into its own forces, said Dareen Khalifa, a researcher with the International Crisis Group who has traveled to the region extensively and documented the “reconciliation” pardons in a report last summer.

The Kurdish militia leaders said: “What do you want us to do, kill them all? Imprison them all? The best way forward is to keep a close eye on them by keeping them within the S.D.F.,” Ms. Khalifa said in an interview. She said that those enlisted had not been Islamic State leaders and that so far there had been no recidivism.

But now the American withdrawal and the Turkish incursion are threatening the informal supervision of those former prisoners, Ms. Khalifa said, creating a risk that some might gravitate back to fighting for the Islamic State.

Turkey, which has battled Kurdish separatist militants at home for decades, launched the invasion primarily to push back the Kurdish-led forces in Syria. Without American protection, the Kurdish leaders are now switching sides to ally with Mr. al-Assad.

In Iraq, too, some say opportunities may be emerging for the Islamic State to revive its appeals to Sunni resentments in the areas it once controlled. Promises of postwar reconstruction have gone unfilled. And Shiite militias that rose up to defeat the Islamic State remain in place, sometimes seeking to profit off the local populations.

“People in the liberated areas say: ‘Why are all these armed groups still around? Why do they still call us all ISIS, and why are they taxing us or extorting us and taking all of our money?’,” said Renad Mansour, the director of the Iraq Initiative at Chatham House.

The campaign against the Islamic State, he said, “was a military solution to what is a social and political problem.”

Mr. Trump, for his part, has insisted repeatedly that Turkey should take over the fight against the Islamic State in Syria. “It’s going to be your responsibility,” Mr. Trump said he told the country’s president, Recep Tayyip Erdogan.

But current and former United States officials say the Turkish military has a bleak track record at counterterrorism and little hope of filling the void left by the Americans and the Syrian Democratic Forces.

“That is wishful thinking as far as I can tell,” said Dana Stroul, co-chairwoman of the congressionally sponsored Syria Study Group and a former Pentagon official.