Iraq’s prime minister issued an order on Monday to rein in armed groups known as popular mobilization forces in an effort to curtail their... 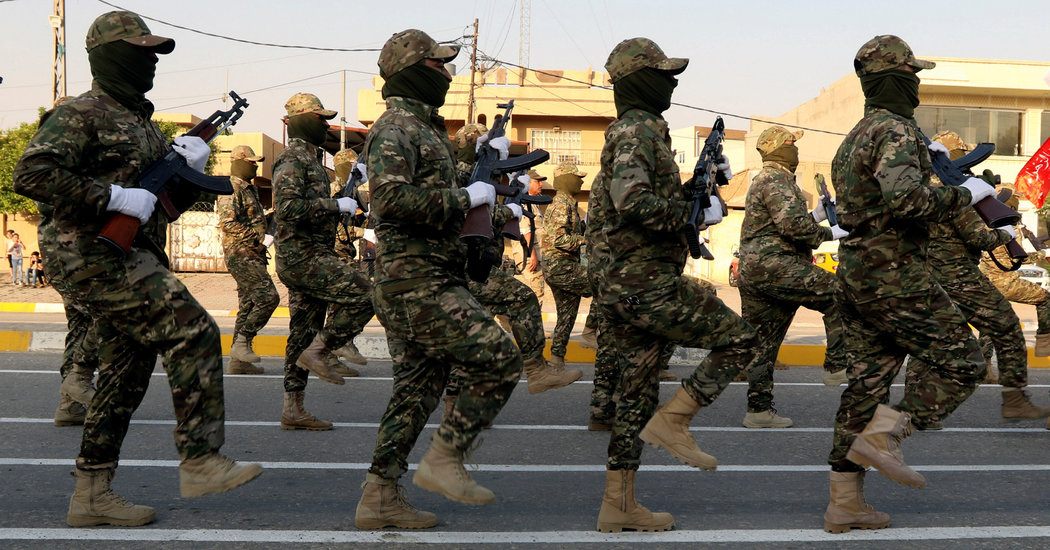 Iraq’s prime minister issued an order on Monday to rein in armed groups known as popular mobilization forces in an effort to curtail their growing influence over some of the economy and their control of checkpoints in some provinces.

Because some of the armed groups have ties to Iran, Prime Minister Adel Abdul Mahdi has been under pressure to move against them from the United States and some Arab countries that fear Iranian influence in Iraq.

In March 2018, Mr. Mahdi’s predecessor, Haider al-Abadi, tried to chip away at the militias’ independence by formally making them part of the country’s security forces. But they have remained largely independent.

It is uncertain how Mr. Mahdi plans to enforce the order, or even whether he can. He has set a tight deadline for the militias to comply: July 31.

The decree was welcomed by many of the popular mobilization groups, including some of the largest and most powerful. The Peace Brigades, which are attached to Moktada al-Sadr, the influential Shiite cleric, said they were already putting the new rules in place.

“From today we have dismantled the Peace Brigades and they are now disconnected from Moktada al-Sadr,” said Safa’a al-Tamimi, the brigade’s spokesman. “From now on we will be known as Brigade 313, 314 and 315. We are giving up the name ‘Peace Brigades’ — although we love this name — but we will go with the procedures and we will be under the control of the prime minister.”

Behind the official language, Mr. Mahdi is trying to address a multifaceted problem that has plagued Iraq since the Islamic State began to seize Iraqi territory in 2014. That prompted the formation of informal armed groups to help fight the extremists. Some of those groups were initially fostered, financed and backed by Iran, but they soon multiplied, and many had little or no connection to Tehran.

The United States has become increasingly suspicious about the role of the militias and has designated two of them — Qutab al Hezbollah and Qutab al Nujaba — as foreign terrorist organizations. When Secretary of State Mike Pompeo visited Iraq in June, he raised concerns that some of the Iranian-linked groups posed a threat to American forces in Iraq.

Officials who work closely with Mr. Mahdi said he had issued his order to curtail the armed groups’ power under pressure from the United States.

The groups will remain under the direct control of the prime minister rather than being integrated fully into the Ministry of Defense or the Interior Ministry, which controls the police.

After Prime Minister al-Abadi tried last year to gain more influence over the militias’ leadership and reduce their power, their numbers actually expanded. There are now about 30 armed groups with a total of about 130,000 to 150,000 members.

The order issued Monday says that the groups must close their local headquarters and their economic offices, as well as the checkpoints they control.

Establishing control over the groups has been difficult, because when they came to the defense of the country as the Islamic State had the Iraqi army on the run in 2014, they achieved the status of heroes.

When the fight against ISIS subsided, the militias showed little inclination to disarm and go home.

With fewer extremists to fight, the groups began to branch out, making money by using their checkpoints to extort truckers.

In some provinces, their economic offices became involved in existing businesses. In Nineveh, for example, two or three popular mobilization groups took over the scrap metal business for a time, making millions of dollars until they were shut down by the Iraqi government.

That type of activity has been deeply resented by local business people, who view some of the groups as behaving like homegrown mafias.