Demonstrations in Baghdad and Iraq’s southern provinces were subjected to deadly bouts of violence overnight on Saturday, as security forces used a combination of... 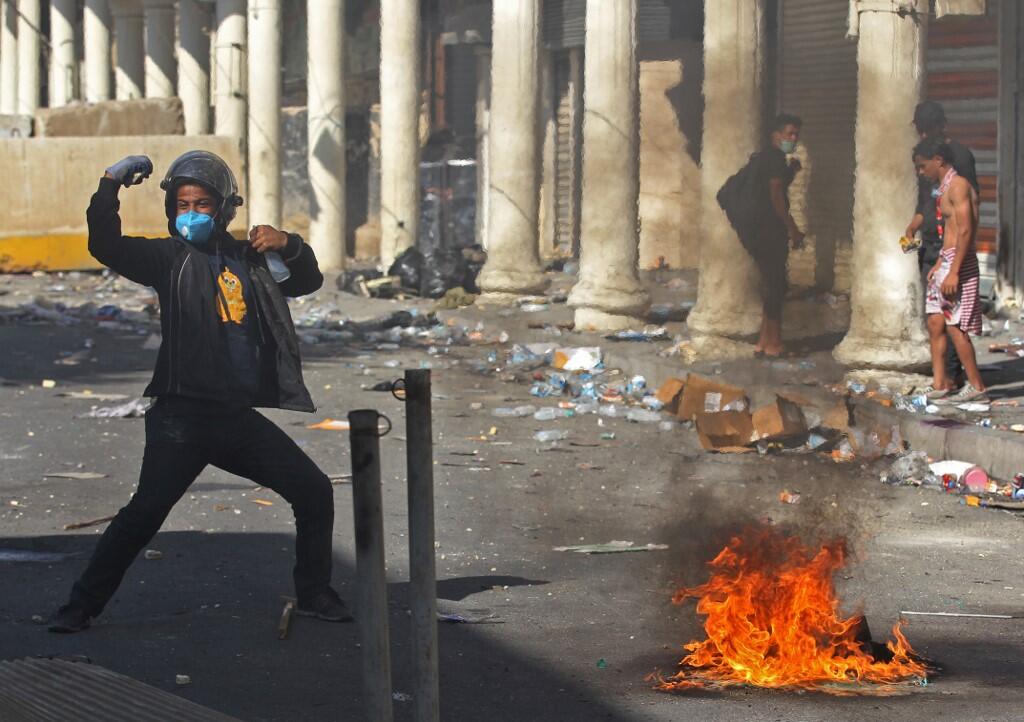 Demonstrations in Baghdad and Iraq’s southern provinces were subjected to deadly bouts of violence overnight on Saturday, as security forces used a combination of live ammunition, military-grade tear gas grenades and sound bombs to disperse protesters occupying several key squares, bridges and roads across the country.

At least eight protesters were killed and more than 300 injured in one day by the security forces’ suppression tactics, which have drawn ire from human rights groups and the international community.

Iraqi authorities wrested control of the key port of Umm Qasr on Saturday, allowing for operations to resume after they were halted for nearly 10 days after demonstrators blocked its entrances.

Two people were killed and at least 20 wounded as security forces opened fire on crowds near the port on Saturday night.

Meanwhile in the capital, authorities fought for control of three bridges over the River Tigris from demonstrators who have been occupying them in recent days. The deadly combination of live ammunition and tear gas grenades that can pierce human skulls killed at least four people, while at least ten were in critical condition in hospital.

Despite the crackdown, protests showed little sign of abating as crowds flocked to the capital’s Tahrir Square, the centrepoint of the protest movement, on Sunday morning, with security forces detonating sound bombs in an attempt to quell the rally.

The protest movement has managed to maintain its presence in the square, and still occupies part of the nearby al-Jumhuriyah Bridge despite the ongoing crackdown.

Students were the driving force of Sunday’s demonstrations, gathering in Nasiriyah, Babel, Samawa and Diwaniya, protesting against the brutal suppression of the demonstrations and echoing calls for an overhaul of the corruption-riddled political system.

Despite the weeks of turmoil brought on by the protests, Iraq’s political leaders on Saturday decided to rally around Prime Minister Adel Abdel Mahdi, brokered by Major General Qasem Soleimani, the head of the Iranian Revolutionary Guard’s foreign operations arm.

The leaders reportedly agreed to end the protests and reopen the bridges and streets “with any means possible”.

However protesters vow to continue the unrest until a more radical political overhaul provides solutions to the deep set social and economic issues most of the population is faced with.

Oil-rich Iraq is OPEC’s second biggest producer, but one in five people live in poverty and youth unemployment stands at 25 percent, the World Bank says. The country is also the twelfth most corrupt in the world, according to Transparency International.

Officials have stolen billions of dollars of public funds since 2003.

Those staggering rates sparked the first wave of protests on October 1. Protesters say the current political system allows parties to dole out government jobs based on affiliation and bribes, leaving anyone without connections unemployed and powerless in a country with a weak private sector.

They are demanding genuine reforms and constitutional amendments.

At least 300 people have been killed and some 15,000 injured while taking part in the protests since October 1, according to the Iraqi Human Rights Commission.