BAGHDAD — Iraqi security forces clashed with anti-government protesters in the capital and other provinces Tuesday, killing two people and injuring more than 200,... 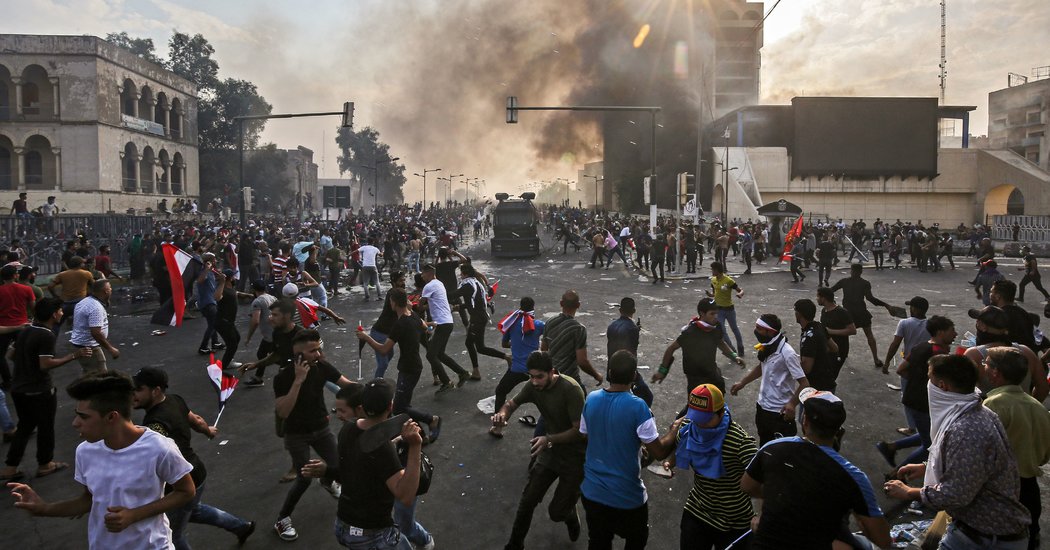 BAGHDAD — Iraqi security forces clashed with anti-government protesters in the capital and other provinces Tuesday, killing two people and injuring more than 200, according to officials.

The protests, the most serious against Prime Minister Adel Abdul Mahdi’s government since it was formed a year ago, signaled that the war-weary country could face a new round of instability.

The protests were largely driven by economic issues, including what demonstrators saw as the government’s failure to improve public services and create jobs.

“We want the very basic rights: Electricity, water, employment, and medicine, and nothing else,” said Mohammed Jassim, a protester. “But this government is shooting at the crowd.”

Many demonstrators also held posters of a popular army commander — Iraq’s counterterrorism chief, Lt. Gen. Abdul-Wahab al-Saadi — whose recent dismissal has set off controversy, with some people blaming it on Iran-backed politicians in the country.

Mr. Abdul Mahdi removed General al-Saadihim from his post last week and transferred him to the Defense Ministry. Iraqis largely credit General al-Saadi with leading the fight against the Islamic State, and many voiced anger at the unexplained move.

In Baghdad, the protests, which were organized on social media, began peacefully with more than 1,000 people marching into the central Tahrir Square.

As some tried to cross the bridge to reach the fortified Green Zone — home to government offices and foreign embassies — police started throwing stun grenades and firing rubber bullets and tear gas to disperse them. Some fell to the ground as they ran away, wiping their eyes.

“We want this government to be changed. This is a government of political parties and militias,” said Fadhel Saber, 21.

As more people converged on the square chanting anti-government slogans, the police began to fire live ammunition, scattering the mostly young male protesters. Other protesters responded by throwing stones at security forces and waving Iraqi flags above the water cannon. Young men were seen carried away, some of them bleeding.

Medical officials in Baghdad said one protester was killed and dozens were injured, some with live ammunition and others with rubber bullets. Many others suffered breathing problems because of the tear gas.

Similar protests and confrontations took place Tuesday in the southern cities of Basra and Nasiriyah.

In Nasiriyah, about 200 miles southeast of the capital, one protester was killed and around 20 people injured, according to hospital officials.

A joint statement issued by the Iraqi interior and health ministries said they “regretted” the violence that accompanied the protests in Baghdad and several other provinces, blaming “a group of rioters” and calling for calm and restraint.

In a tweet, the influential Shiite cleric Muqtada al-Sadr called on government leaders to begin an investigation into Tuesday’s clashes.