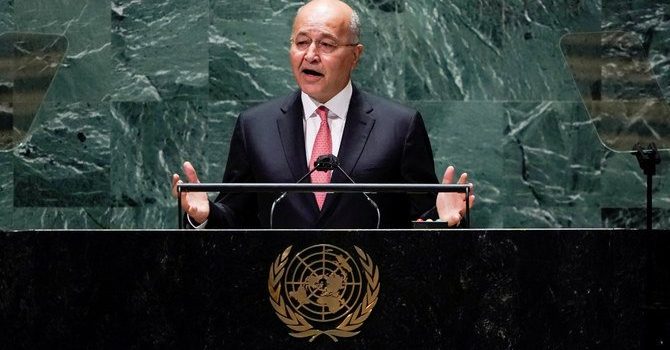 Barham Salih1 Iraq14 UNGA 20213
NEW YORK: Cooperation and solidarity is the world’s “only choice” in the fight against global terrorism, Iraqi President Barham Salih said. Speaking at the... 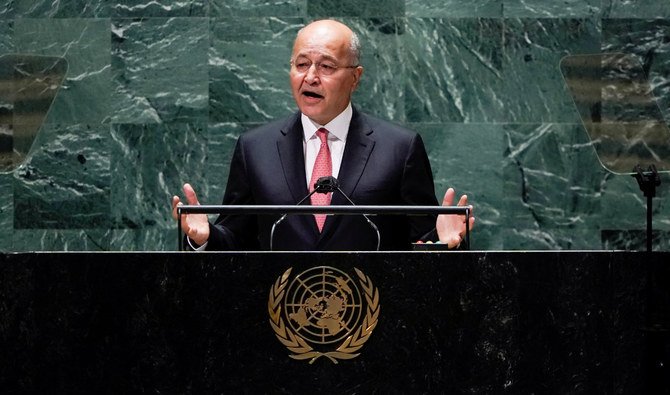 NEW YORK: Cooperation and solidarity is the world’s “only choice” in the fight against global terrorism, Iraqi President Barham Salih said.

Speaking at the UN General Assembly, Salih told fellow world leaders that his country had been dogged by wars and genocides over the past 40 years.

“We have known mass graves, the use of chemical weapons and terrorism all over our cities.”

The Iraqi leader said that victory over “the evil forces of Daesh” would not have been possible without the joint efforts of Iraqi army and police, the Peshmerga on the one hand, and their regional and international allies, on the other.

Salih reiterated his call for the international community to combat funding for terrorism, provide reparations to victims and help rebuild destroyed regions that have been freed from “the yoke of terrorism.”

This will ensure that such tragedies are not repeated, he said.

“Our obligation today is to rebuild the cities that have been liberated and ensure that the displaced go back home.”

The Iraqi president spoke at length about the link between terrorism and corruption, warning that it threatens not only Iraq’s security but the stability of the whole world.

“Our country is facing corruption because of the heavy burden left behind by wars and conflicts that have squandered a huge part of the resources of the country, depriving Iraqis of the riches of their land,” Salih said.

“For Iraq, fighting corruption is a genuine national battle. The situation will not normalize unless we manage to beat corruption.”

Salih renewed his call for an international alliance against corruption, similar to that against terrorism.

He urged member states to tackle the roots of corruption and help Iraq to restore the funds that had been plundered.

“We cannot eliminate terrorism unless we eliminate corruption, which itself constitutes a political economy of violence and terrorism,” Salih said.

“Corruption and terrorism are linked, mutually reinforcing and work steadfastly in tandem.”

Referring to regional conflicts, Salih told UNGA participants that “the absence of Iraq in its natural role for the past 40 years” has exacerbated instability, which is the result of wars and the breakdown of security and political systems in the area.

The Syrian conflict and the prolonged Yemeni war are “unacceptable,” he said. Ending these wars “should be a priority.”

The Iraqi leader added: “Neither will there be peace without granting Palestinians their legitimate rights to a state,” reiterating Iraq’s call for a global and fair solution to the issue.

Salih said that the success of peace efforts relied on an Iraq that “is safe, stable and fully sovereign.”

He added: “This requires regional and international support as well as (putting) a stop to competitive behavior and the conflicts of others being played out on our land.”

The Iraqi president called for further regional cooperation — in the form of a new organization — over shared issues, including terrorism, extremism, climate change, unstable economic conditions and the “inability to provide work to a greater number of young people.”

He said that the recent Baghdad Conference for Cooperation and Partnership underscored that “Iraq, which was a synonym for conflict, is now a meeting point for the interests of people and states in the region.”

Iraq is gearing up for national elections next month, which Salih said will be “decisive” and “have an effect on the entire region.”

He stressed the importance of restoring trust to an Iraqi electorate that has lost confidence due to “the failings of the previous system.”

To that end, a new electoral law has been adopted that is “more just and representative,” and a new electoral commission formed to ensure proper organization of the elections.

Salih said that a new electoral code of conduct will “guarantee the success of the elections so they can pave the way for peaceful reforms through parliament and government that genuinely respect the will of the people without maneuvers and manipulations.”