BAGHDAD — The Iraqi government scrambled on Thursday to curb a third day of violent antigovernment protests, as people took to the streets in... 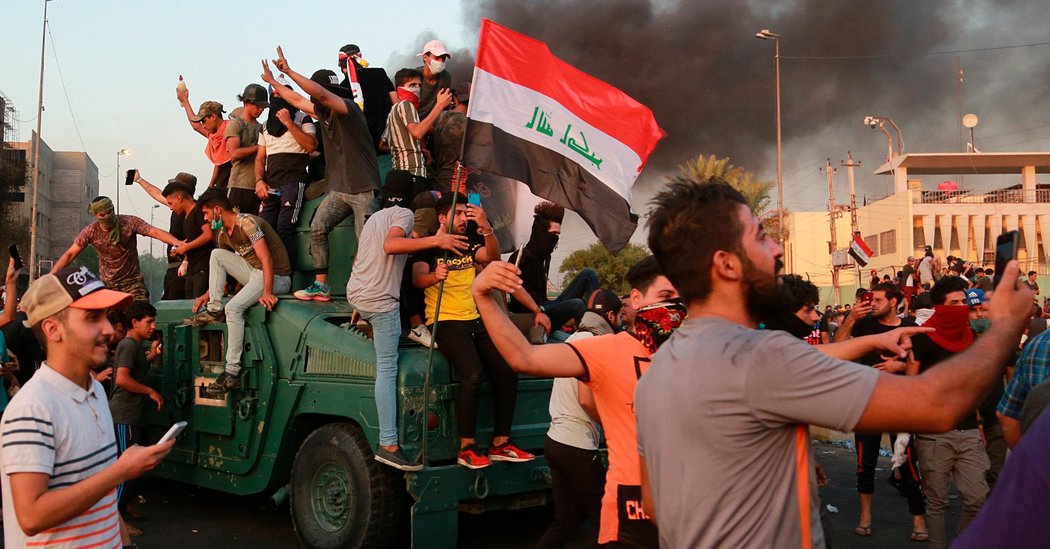 BAGHDAD — The Iraqi government scrambled on Thursday to curb a third day of violent antigovernment protests, as people took to the streets in the capital and in a half dozen southern provinces, some throwing rocks at security forces who responded with bullets.

At least 22 people were killed and hundreds were wounded, with the most violent unrest in Nasiriya, in Iraq’s south, and in Baghdad, according to the country’s Health Ministry.

The outburst of public anger, largely over corruption and unemployment, was the first since the current government came to power about a year ago, with the protests more widespread than those in 2018 in Baghdad and Basra.

At times on Thursday it seemed Iraq was slipping into chaos, but after midnight Baghdad calmed as did several of the tenser provinces. Prime Minister Adil Abdul Mahdi spoke directly to the country, promising employment opportunities and better distribution of wealth.

He said the government had started “big reforms to provide jobs and to end poverty.”

He did not specify how he intended to carry out such changes or offer any particulars, but he underlined that in order for the government to deliver on those promises the country had to avoid “sliding into a state of destruction” in which citizens were intent on “destroying.”

Whether his tone, which seemed to strive to be conciliatory while also calling for restraint, would persuade protesters, their leaders and the political opposition seemed far from assured.

He gave his speech close to dawn on Friday, when many people would have been asleep.

The last few days have showed a government caught by surprise at the depth of anger among ordinary citizens about corruption among government officials and the failure of public services to meet their needs.

Some leaders, such as the Shiite cleric Muqtada al-Sadr, whose words can calm or inflame tens of thousands of people, have alternated between conciliation and criticism of the government’s decision to cut off the internet to try to silence the voices of protest organizers.

In an effort to prove his seriousness, Mr. Mahdi invited representatives of several political factions, including opposition parties, to meet with him and discuss how to be reduce tensions.

Mr. Mahdi’s efforts seemed aimed at dividing the protesters between those who had resorted to violence and those who insisted their goal was to protest peacefully.

“Today we are pulled between two options: having a state or having no state,” he said.

Friday, the weekly Muslim day of mass prayer, could be important since Shiite clerics and Sunni religious leaders often use the gatherings to appeal to followers to pursue a particular course of action. While the clerics’ power is more limited than it once was, their words still have impact. They have been largely quiet until now.