BASRA, Iraq — Hussein Karim sold his three cars, he sold the land where he planned to build a house, and he spent his...

BASRA, Iraq — Hussein Karim sold his three cars, he sold the land where he planned to build a house, and he spent his savings — several thousand dollars — all on his crystal meth habit.

He is one of thousands of meth addicts in Iraq, a country where drug problems have been rare. But growing addiction here is the most recent manifestation of how the social order has frayed in the years following the American invasion in 2003.

Mr. Karim, 32, now lives in a windowless room with his wife, his three children and his disabled brother.

“If crystal is in front of you, you have to take it,” he said as he held his 2-year-old daughter on his lap and his 6-year-old leaned against him.

He says he has been clean for more than two years and avoids anyone who might bring him in contact with the drug. He does not even answer his door but lets his brother do that. He does not want to run into anyone from his old life because he fears he could be pulled back.

Last year in Basra province, Iraq’s southernmost governorate and the one with the worst drug problems, 1,400 people, almost all men, were convicted of possession or sale of illegal drugs, mostly crystal meth. More than 6,800 are in prison nationwide and that is excluding the Kurdish region, which accounts for about a fifth of Iraq’s population, according to Iraq’s Supreme Judiciary Council.

Still, that number is relatively small for a country of about 39 million. But because drug addiction has mainly struck two cities — Basra and the capital, Baghdad — it is highly visible.

And because it is a largely new problem in Iraq, neither community leaders nor government officials seem ready to deal with it other than by putting people in prison.

Until about seven years ago, according to the United Nations Office on Drugs and Crime, Iraq was essentially a transit country, meaning most drugs passed through on their way to somewhere else.

Now it is possible to buy an array of addictive stimulants in Iraq as well as hashish. Illegal drugs are beginning to be farmed and possibly manufactured in labs, according to the police, United Nations experts and working-class urban families who see the scourge affecting relatives.

Drugs contribute to poverty as families lose their male wage earners to addiction and prison.

“The government authorities are very shy in addressing this situation,” said Abbas Maher al-Saidi, the mayor of Zubair, a city of 750,000 just north of Basra. Drug use is high among the city’s youths, many of them unemployed.

“They do not admit this problem because of the social traditions. Even the media is not discussing it,” the mayor said. 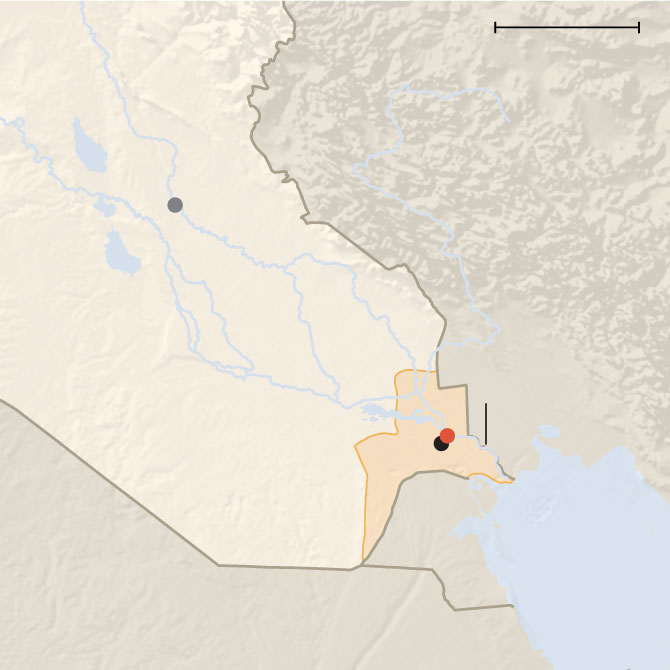 Among devout Muslims, illegal drug use is considered a shame, tainting not just a family, but the society.

The government’s approach is to try to expunge any outward sign of the problem. Almost every night, dozens of SWAT teams fan out across Basra province, targeting users and dealers and hauling in suspects.

Almost all those arrested are ultimately convicted, creating a new problem: The prisons have run out of space and the overflow — hundreds of men — is crammed in holding rooms in the province’s police stations and those of neighboring provinces, where the smell of sweat, excrement and urine is overpowering.

The rise of drug use in Basra marks only the latest phase of the region’s long slide into criminality that began in earnest after the United States toppled Saddam Hussein. In the absence of Saddam’s tight police grip, religious and tribal groups vied for control of the oil-rich province.

With authority fragmented, there was little effective crime fighting and some militias even participated in criminal networks.

Today, there are regular and specialized police forces, but they seem unable to get ahead of the drug traffickers.

Unemployment has dropped over all in the post-Saddam era, but it has remained at close to 20 percent among youths, according to the World Bank and other sources. It is even higher in some parts of Basra, contributing to criminal activity, including drug use.

The use of stimulants emerged and spread about seven years ago. At that time, gangs moved into the drug trade as large quantities of crystal meth became available from neighboring Iran, where numerous labs had sprung up, said Angela Me, the head of research for the United Nations drug agency.

Since then, Iran has tried to clamp down on the labs, but some production has moved to neighboring countries, she said. Judge Riyadh Abid al-Abass of the Basra Criminal Court said drugs also come from Saudi Arabia and Kuwait.

“Criminal gangs could get the drugs in through the long borders and the Shatt al Arab,” said Adil Abdul Razzak, chief judge of the Basra appellate court.

The Shatt al Arab is a picturesque archipelago of sand banks and small islands, where Iraq’s freshwater Tigris River turns into an estuary as it flows past Basra and into the Persian Gulf. Small watercraft laden with contraband can easily navigate the waterway from Iran to Iraq.

Under Mr. Razzak’s supervision, the Basra appellate court has begun to keep records of how the drug arrests correlate with unemployment: He suspects that people without jobs feel they have little to lose when they break the law, and the court has found that at least 90 percent of those arrested are unemployed.

Although efforts to reduce the illegal drugs coming through Iraq’s official border crossings with Iran mostly have succeeded, traffickers have turned to alternate routes and toughened their defenses against law enforcement, said the police and judges.

They now use drones and set up cameras on roads outside their compounds, which have heavy gates and walls that require time for the police to penetrate, said Mr. al-Saidi, the Zubair mayor. The fortified compounds and cameras were easily visible when Times journalists traveled with a Basra SWAT team.

While it is impossible to prove that any of Iraq’s militias, known as the Popular Mobilization Units, are involved in the drug trade, many of those in prison for drug use say they believe some units work with the traffickers and have an in with the government.

The units came into existence to fight off the invasion of the Islamic State in 2014. They include some 30 predominantly Shiite groups, with many of the most powerful ones tied to Shiite Iran. Basra, like all of southern Iraq, is overwhelmingly populated by Iraq’s Shiite majority.

The fact that big traffickers are either never caught or escape from prison soon after capture adds to suspicions about the militias’ role.

While crystal meth is the most dangerous amphetamine used in Iraq, perhaps the most popular is illicitly manufactured under the name Captagon. This drug appears to be heavily used by fighters throughout the Middle East — much as the allied troops used amphetamines in World War II to keep fighter pilots awake during long forays.

“Captagon is known sometimes as the drug of freedom fighters,” said Reiner Pungs, an expert at the United Nations drug agency on precursor chemicals for manufacturing illegal substances.

“You take Captagon and allegedly, you feel you have more energy,” he added. “People say they stay awake and are not hungry so they can keep fighting under difficult conditions.”

Mr. Pungs said it was possible that Iraq was now producing crystal meth since, according to an International Narcotics Control Board report in 2018, it imported many tons of pseudoephedrine. The nasal decongestant, found in some allergy and cold medicines, can also be used to make crystal meth.

In the absence of a drug policy, Iraq has developed a serious prison overcrowding problem. Many inmates complain of overcrowding and ill treatment, but say that what they want most is rehabilitation and help finding jobs when they get out.

The police holding cells seen by The New York Times had some 70 men stuffed into a space more suited to 10. The men were crammed together, sitting on the floor and taking turns sleeping as a television blared Turkish and American melodramas and action movies dubbed in Arabic.

There was no place to walk, much less exercise. Some stayed in these conditions for the duration of their term, typically 15 months for first-time offenders. All of them are barefoot to deter escape.

“There’s isn’t any medication here or any treatment,” said Hamid Jabar Abdul Karim, 32, who used to work as a canine trainer for the Iraqi security forces. Now that he has a drug offense on his record, he said, he was unlikely to be rehired.

There are a couple of rehabilitation centers, but they are so small they make little impact.

A drug conviction in Iraq makes it difficult to ever get a salaried job because traditional Iraqi culture views drug use as a “dishonorable crime,” which makes employers shy away, said addicts and government officials.

For Mr. Karim, the father of three who was an addict for eight years before going to jail, employment possibilities look bleak. He worked as a heavy equipment operator in construction, then as fighter for the Popular Mobilization Units. He sometimes bought crystal meth when he was training in Iran. Now no one will give him a salaried job, he said.

Compounding his problems is that he is illiterate because, as a farmer’s son, he was expected to stay home to work the land. His children are also unschooled.

“Can we have an ice cream?” she asked.

Mr. Karim reached in his pocket, but apparently there was nothing in it.

He kissed his daughter’s forehead: “Not today, habibti.”