Iraq Cracks Down on Protests as Prime Minister Gains Support

Iraqi security forces moved Saturday to take ground back from anti-government demonstrators in Baghdad, forcing a confrontation that turned violent and filled the streets... 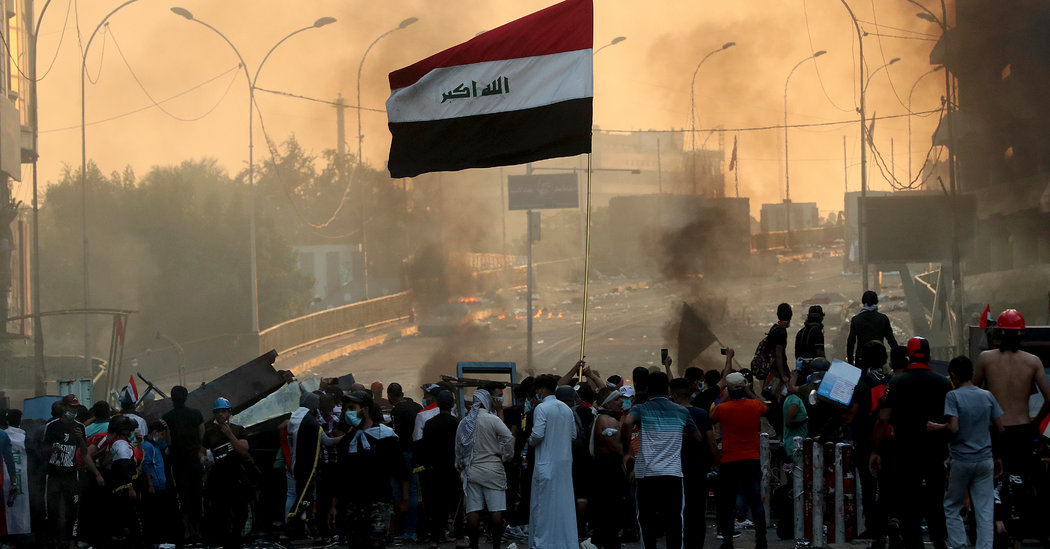 Iraqi security forces moved Saturday to take ground back from anti-government demonstrators in Baghdad, forcing a confrontation that turned violent and filled the streets with careening vehicles rushing the wounded to first aid stations and hospitals.

The melee, which killed six people on Saturday, followed blanket crackdowns in the southern city of Basra on Friday and in the shrine city of Karbala. As the Iraqi government pushed broadly to constrain the protests, it sought in Baghdad, the capital, to restrict them to a smaller public space.

However, with more than 100 people injured, the mounting casualties could make that tactic backfire, and draw back to the streets those protesters who had begun to go home.

“What has been taken by force, we will take back by force,” said Mohammed Juhi, a civil society activist whose organization — I Am Here to Take My Rights — has been on the front line since the demonstrations began in October.

“I do not know why the government and international community have not responded to us,” he added.

The demonstrators are demanding a change in the system of government. They would like a presidential system instead of a parliamentary one, no more corruption and the end of political parties as well as the division of ministries among them.

The repressive moves angered the influential Shiite cleric Moqtada al-Sadr. He had been careful until now to calibrate his encouragement of the demonstrators, many of whom are from Sadr City, a vast slum in eastern Baghdad which is a wellspring of support for the Sadr family.

Some of his supporters have been disappointed at the moderate tone of his previous messages. But Mr. al-Sadr has hesitated to confront other Shiite leaders, many of whom support the prime minister and his Shiite-dominated government.

However, he is unambivalently opposed to Iraqi security forces’ shooting Iraqi protesters. Five of those killed were hit by live ammunition, The Associated Press reported, while the sixth died after being shot in the head with a tear-gas canister.

“Sayid Moqtada Sadr wants people to exercise their right to protest, to say what they want,” said Sheikh Saleh al-Obeidi, his spokesman. “Regarding the massacre that happened today in Baghdad and yesterday in Basra — the killing in cold blood with live bullets — there’s no justification for it.”

In Basra, a Sadr stronghold, the security forces also burned the tents of demonstrators near the provincial council building, effectively demolishing the main sign of their presence.

It was not yet clear whether Mr. al-Sadr would call on his supporters to come to Tahrir Square, the epicenter of the protests in Baghdad. But his statements appeared to be inching toward that — an outcome that could add considerable manpower and energy to those who have been protesting for weeks.

The backdrop to the security force offensive is a newfound clarity on the part of the Shiite political elite and allied groups regarding support for Prime Minister Adil Mehdi.

Three weeks ago, Mr. Medhi was on the brink of resigning. Every day brought new discussions of what would happen if he left and how his successor might be chosen.

As the protests became entrenched and broadened, the political parties with parliamentary blocs began to look hard at possible candidates to replace him. Both Iran and the United States — two countries that have been heavily involved in Iraq since the 2003 fall of Saddam Hussein — weighed in.

Although the two countries could hardly be more different in their foreign policy in Iraq, they both feared a vacuum and found none of the other candidates terribly appealing.

Earlier this week, at a meeting of most of the political blocs, almost everyone agreed to support Mr. Mehdi for the foreseeable future, said Izzat Shahbendar, an informal adviser to Mr. Mehdi who has been trying to open the way for discussions between the protesters and the government.

“Now Adil Mehdi feels bolstered; he’s encouraged to stay,” Mr. Shahbendar said. “Who would he resign for? It would be chaos if he resigned.”

It remains unclear whether Mr. Mehdi is up to the job of charting a course to resolve the demonstrations constructively. The security force pushback on Saturday night appeared designed to shrink the demonstrations, but without offering protesters a reason to retreat, it seemed more likely to strengthen antagonism toward the government.

“From the protesters’ point of view, it is a now-or-never situation,” said Abbas Kadhim, who leads the Atlantic Council’s Iraqi Initiative. “They have invested so much — so much in lives and injuries — and they are afraid if they go home, they will get nothing.”

The government, for its part, wants the country to remain functional. It has already lost millions of dollars because of the protesters’ closing of the port at Um Qasr, which ships much of Iraq’s crude oil.

“The only way for it to end is for the government to be creative and give the demonstrators something they can go home with, and they also need to bring in a third party to be the guarantor of the agreement,” Mr. Kadhim said.

But with every person killed, it gets harder to bridge the gap.

“As much as they try to oppress us, we are just as determined to resist them,” said Mohammed Qassim Mohammed, 25, an engineering student who was protesting near a bridge in Baghdad that the security forces retook on Saturday.

One of those killed was a friend his age, he said.

“Is this acceptable to the government or the international community that a 25-year-old man would be killed asking for his rights?” he asked, adding, “I have decided from today that even if all the protesters return home, I will not return until I get my rights and the rights for my friend.”