Iran’s supreme leader struck a defiant tone in a rare public sermon on Friday, calling the United States an “arrogant power” and telling tens of thousands of chanting worshipers that God’s backing had allowed his country to “slap the face” of the United States.

In his first such address in eight years, the leader, Ayatollah Ali Khamenei, sought to rally supporters and undermine critics after weeks of turbulence in the Middle East that brought Iran and the United States to the brink of war and prompted street protests in Iran over the accidental downing of a civilian jetliner by Iranian forces.

Ayatollah Khamenei offered only scant condolences to the families who lost relatives in the crash, and instead sought to project strength. He dismissed protesters as “stooges of the United States,” lauded Maj. Gen. Qassim Suleimani, Iran’s foreign operations chief who was killed in an American drone strike, and praised a retaliatory Iranian missile attack on United States forces in Iraq.

“These two weeks were extraordinary and eventful. Bitter and sweet events. Lessons we learned. The Iranian people went through a lot,” he said. “We delivered a slap to U.S.’s image as a superpower.”

He also dismissed “American clowns” who he said pretended to support Iran but want to stick their “poisoned dagger” into its back.

The event, choreographed to present an image of power and unity, skirted the accidental downing of a Ukrainian passenger plane on Jan. 8 by Iranian forces that killed all 176 people on board. A lone banner featuring an airplane hung between huge pictures of General Suleimani.

The downing of the jet — followed by three days of denials by Iranian officials — spurred a new wave of protests across the country that Iranian security forces have sought to quell with bullets and tear gas.

On Friday, the Ukrainian foreign minister, Vadym Prystaiko, said that an Iranian representative would travel to Ukraine next week and that Iran had agreed to hand over data and voice recorders from the downed plane after they had been examined by a team of experts from Canada, Iran and Ukraine. 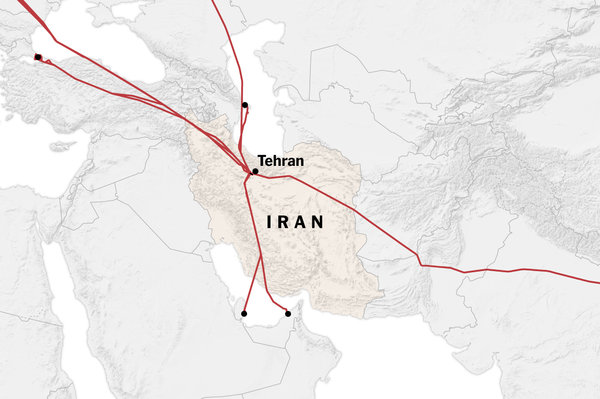 Planes took off after Iran’s missile strikes on bases in Iraq, and even after a Ukrainian plane crashed shortly after takeoff.

Nearly 45 minutes into his sermon, Ayatollah Khamenei said his “heart burned” for the victims of the crash, but he quickly accused Iran’s enemies of seeking to capitalize on the tragedy to overshadow the killing of General Suleimani and the missile strikes on two bases that housed American troops in Iraq.

“As much as we were sad about the crash, our enemy was happy about it,” he said. “They thought they found an excuse to undermine the Islamic Revolutionary Guards Corps and our armed forces and question the Islamic Republic.”

Forgoing Tehran University, where Ayatollah Khamenei usually speaks, he appeared for communal Muslim prayers on Friday at Tehran’s Grand Mosalla, a large complex used as a communal prayer center for Muslim holidays and as an arena for election campaigns.

Crowds streamed in several hours before his sermon began, including schoolchildren, government employees and worshipers from neighboring provinces who had been bused in from their local mosques.

The complex had been outfitted with political messages: American flags were spread on the floor in the entrances so that worshipers could tread on them. Uniformed soldiers handed out posters of General Suleimani and red headbands with “God is Great” written in Arabic.

President Hassan Rouhani, who is seen as a moderate, was in the front row as Ayatollah Khamenei spoke. Former President Mahmoud Ahmadinejad also sat nearby, as did Gen. Amir Ali Hajizadeh, the head of the Islamic Revolutionary Guards Corps’ aerospace forces who has said units under his command were responsible for shooting down the plane. Iranian lawmakers, politicians and other citizens have called for his resignation over the downing.

Large banners inside the complex featured the face of General Suleimani and other men who were killed alongside him in United States drone strikes, ordered by President Trump, near the Baghdad airport on Jan. 2. Other banners read, “Death to America.”

Mr. Trump responded on Twitter, saying, “the so-called ‘Supreme Leader’ of Iran, who has not been so Supreme lately, had some nasty things to say about the United States and Europe. Their economy is crashing, and their people are suffering. He should be very careful with his words!”

Ayatollah Khamenei, 80, Iran’s top political and religious official, delivers Friday sermons only at times of serious crisis that require his intervention. His last such sermon was in 2012, during the Arab Spring uprisings in the region. He also spoke in 2009, during widespread protests in Iran contesting the results of a presidential election that became known as the Green Movement.

In both instances, Ayatollah Khamenei reinforced the government’s hard line by ordering people off the streets.