AFP/Tehran/Washington Iran’s Revolutionary Guards yesterday denied that they had impeded a British oil tanker in the Strait of Hormuz, the force’s Sepah news agency... 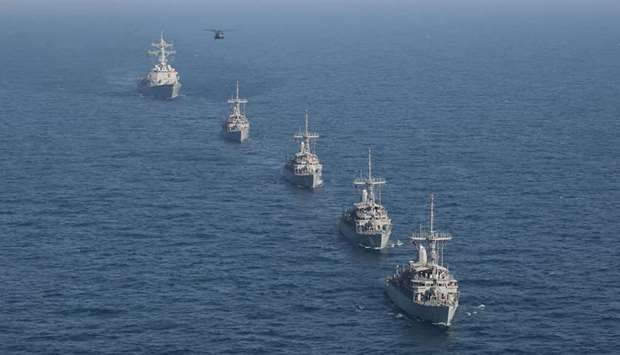 Iran’s Revolutionary Guards yesterday denied that they had impeded a British oil tanker in the Strait of Hormuz, the force’s Sepah news agency said.
“There has been no confrontation in the last 24 hours with any foreign vessels, including British ones,” the Revolutionary Guards said in a statement.
Britain said earlier yesterday three Iranian boats had attempted to “impede the passage” of a British oil tanker in Gulf waters, forcing UK warship HMS Montrose to intervene.
The Guards’ statement said that if they were ordered to seize foreign vessels they would do so “immediately, decisively and speedily.”
The incident follows the detention of an Iranian oil tanker by Britain on July 4 off the coast of Gibraltar, a tiny British overseas territory on Spain’s southern tip. The 330m Grace 1 tanker, capable of carrying 2mn barrels of oil, was halted by police and customs in Gibraltar with the aid of a detachment of British Royal Marines.
Iran condemned the detention as an “illegal interception,” but Gibraltar officials said that the cargo was believed to be destined for Syria, which is subject to European sanctions.
Iranian President Hassan Rouhani had warned Britain on Wednesday of the “consequences” of what he described as “a foolish act”.
“I point out to the British that you initiated insecurity (on the seas) and you shall grasp the consequences of it later on,” Rouhani said in comments to the cabinet broadcast by state TV.
On Monday Iran’s defence minister had vowed to respond to Britain’s move.
Calling the tanker seizure an act of maritime piracy, Brigadier-General Amir Hatami said it “will not be tolerated by us and will not go without a response.”
The secretary of Iran’s Expediency Council, a key advisory and arbitration body, warned that if Britain failed to release the tanker Iran would be forced to take tit-for-tat action.
“If Britain does not release the Iranian oil tanker, the relevant authorities will be duty-bound to take reciprocal action and seize a British oil tanker,” said council secretary Mohsen Rezai.
The incident follows a spike in Iranian-US tensions in recent weeks, with Washington blaming Tehran for multiple attacks on tanker ships, and the Islamic republic shooting down an American surveillance drone.
It also comes as Europe mulls how to respond to Tehran breaching the uranium enrichment limit it agreed to under a landmark 2015 nuclear deal abandoned by the United States.
The Pentagon said yesterday it was discussing military escorts for vessels in the Gulf.
The White House’s nominee to become chairman of the Joint Chiefs of Staff, General Mark Milley, said Washington was attempting to put together a coalition “in terms of providing military escort, naval escort to commercial shipping,” he said.
“I think that that will be developing over the next couple weeks,” Milley told the Senate Armed Services Committee.
The US, Britain and France all maintain a naval presence in the Gulf.
But both London and Paris have been reticent to join in Washington’s “maximum pressure” campaign against Iran to force it to pull back on its involvement in conflicts in Syria, Iraq and Yemen.
British media reported that the possible deployment of more Royal Navy ships to the region was “being looked at” in government meetings yesterday in the aftermath of the newest incident.
But in France, a government official told AFP that they were not planning for the moment to expand their presence in the Gulf. “France is on a course of deescalation,” the official said. “Sending additional military assets to the region does not seem useful to us.”
Earlier this week, General Joseph Dunford, the top US military officer, said the United States could lead any escort operation and provide surveillance as other countries protected tankers under their own flags.
The move would reprise the 1987-1988 US operation to protect Kuwaiti oil tankers from Iranian attacks during the Iran-Iraq war.