Iran’s President Lashes Out at Europeans Over Crumbling Nuclear Deal

BEIRUT, Lebanon — Under growing pressure at home and abroad, Iranian leaders attempted on Wednesday to calm domestic anger over the downing of a... 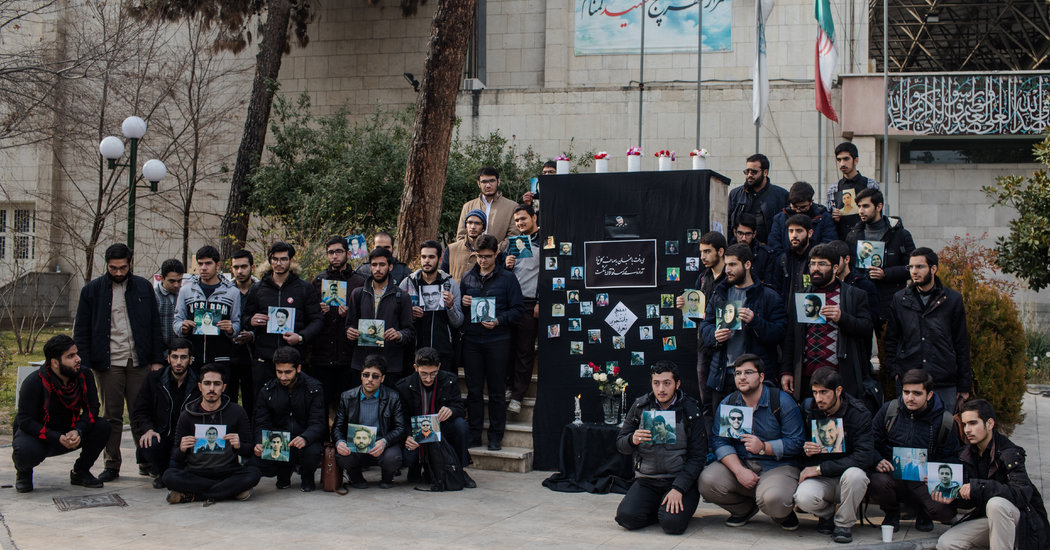 BEIRUT, Lebanon — Under growing pressure at home and abroad, Iranian leaders attempted on Wednesday to calm domestic anger over the downing of a passenger jet last week, while lashing out at European nations that have formally accused Iran of breaking the 2015 agreement to curb its nuclear program.

In Tehran, President Hassan Rouhani criticized — and appeared to threaten — Britain, France and Germany for officially accusing Iran on Tuesday of reneging on its commitments under the nuclear deal, a step that further isolates Iran internationally and that could lead to renewed United Nations sanctions.

The European countries, signatories to the deal, have tried to salvage the agreement since President Trump pulled out in 2018 and imposed a series of economic sanctions on Iran, kick-starting the current high tensions. They said on Tuesday that they still hoped to preserve the deal, but Mr. Rouhani, at a government meeting, accused the Europeans of siding with the United States and urged them to uphold the deal.

“Today, the American soldier is in danger, tomorrow the European soldier could be in danger,” Mr. Rouhani said in a speech, Agence France-Presse reported.

The Europeans and the United States would only aggravate tensions in the region if they continued pulling back from the deal, he warned. “You will suffer if you take a wrong move,” he said, according to Press TV, a state-run news agency.

The nuclear deal, which was intended to keep Iran from building an atomic bomb, imposed limits on its ability to enrich uranium — the process of transforming the element into fuel for nuclear reactors or weapons. In response to American sanctions, Iran has repeatedly breached those restrictions, despite European pleas to return to compliance.

But Mr. Rouhani seemed to leave a sliver of room open for further negotiation on Wednesday, noting in his speech that Iran’s recent steps to increase its nuclear activities were reversible. If the United States softened its punishing stance toward Iran, “we are prepared” to reciprocate, he said, according to Press TV.

Comments from Treasury Secretary Steven Mnuchin on Wednesday morning suggested that the United States was looking in the opposite direction, citing what he called “very direct discussions” with the European signatories to the nuclear deal.

“We look forward to working with them quickly and would expect that the U.N. sanctions will snap back into place,” he said on CNBC.

The Europeans’ decision to invoke the deal’s formal dispute resolution process arrived at a flammable moment for Iran, after weeks of domestic and international tumult. Antigovernment protests broke out in several cities last month, but the targeted killing by the United States of a top Iranian general this month temporarily united the country behind its leadership, and Iran fired missiles at bases housing American troops in Iraq in retaliation.

On Jan. 8, a Ukraine International Airlines flight to Kyiv crashed shortly after takeoff from Tehran, killing all 176 people aboard. After claiming for three days that the disaster had resulted from mechanical failure, Iran acknowledged that its own antiaircraft missiles had shot the plane down, as Western governments and news organizations had reported.

The crowds of mourners that packed Iranian cities for the slain Iranian commander, Maj. Gen. Qassim Suleimani, last week gave way to widespread, though smaller, protests against the government’s handling of the airliner accident.

The Iranian foreign minister, Mohammad Javad Zarif, acknowledged the protesters’ anger and seemed to validate it in remarks on Wednesday at a diplomatic conference in New Delhi.

“In the last few nights, we’ve had people in the streets of Tehran demonstrating against the fact that they were lied to for a couple of days,” news organizations reported him as saying.

After admitting to shooting down the plane, the Iranian military said that “human error” had been at fault, not any system problem. On Tuesday, the military’s Islamic Revolutionary Guards Corps said it had arrested a person who had recorded a video of a missile striking the plane — images that undermined Iran’s initial denials.

Mr. Rouhani said on Wednesday that the military should apologize to the Iranian people for its three-day wait in admitting the mistake, according to Press TV. He said the military had taken a “good step” in acknowledging what had happened, but that it had to follow up with reforms to prevent future mistakes.

But he also seemed to attribute the delay in conceding that the plane had been shot down to the sheer shock of what had happened.

“No one could believe that an aircraft has taken off from an international airport in the capital, begun flying on its route, and is then targeted,” said Mr. Rouhani, a former commander of Iran’s air defense forces.

It was the second day in a row that the president, a relative moderate on Iran’s political spectrum, had criticized the military, which is closely tied to the country’s hard-line leaders. On Tuesday, he called for a special court to investigate the disaster and the authorities’ response to it, saying that greater openness was needed.

On Wednesday, Mr. Zarif, an ally of the president, appeared to be trying to balance the two power centers, praising the military in his remarks for being “brave enough to claim responsibility early on.”

Mr. Rouhani also criticized the clerical establishment, which wields ultimate power in Iran, for disqualifying candidates in parliamentary elections next month, including some sitting lawmakers. Religious leaders often bar candidates seen as liberals or critics of the system, leaving voters to choose among conservatives whom the establishment considers acceptable.

Where there is no clear reason for disqualification, “don’t disappoint the people,” the president said.

A contest for a single office might have the appearance of choice, with 17 candidates, but “17 people from how many sides, one side?” Mr. Rouhani asked. “This is not elections. It’s like having 2,000 of the same item in a shop.”

The protests since the plane crash resulted on Wednesday in the departure of the British ambassador to Iran, Rob Macaire, according to the state-run Islamic Republic News Agency. Iran had sought to expel him after he was detained briefly on Saturday, accused of attending an illegal antigovernment demonstration at a university in Tehran.

Mr. Macaire said on Twitter this week that he had not been taking part in the protest but had gone to attend a planned vigil for victims of the plane crash.

“Normal to want to pay respects,” he wrote, noting that some of the victims were British. “I left after 5 mins, when some started chanting.”

Britain had strongly objected to his detention in Iran, but in the end, Mr. Macaire left the country “with prior notice and according to the protocols,” IRNA reported on Wednesday, without offering further details.

It remained to be seen whether protests in Iran over the airplane’s downing would continue much longer, but the economic distress that spurred Iranians into the streets late last year seems almost certain to continue. The economy is already choking under American sanctions, and Iran’s fading hopes for a badly needed economic lifeline from Europe received another blow with the invoking of the resolution mechanism on Tuesday.

A spokesman for the Iranian Foreign Ministry, Abbas Mousavi, warned on Tuesday that Iran would respond “firmly, decisively and aptly” if the three European nations moved toward reimposing sanctions.

“They should prepare themselves for potential consequences, of which they have been notified,” Mr. Mousavi said, according to the state-run outlet Press TV.