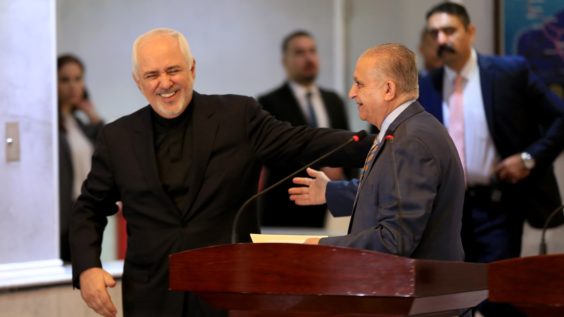 Iranian Foreign Minister Mohammad Javad Zarif has told European nations to ignore the Islamic State’s military capabilities not covered under an agreement aimed at curbing its nuclear capabilities, and “normalize economic ties.” He was apparently referring to ballistic missile developments that have Europe and others worried even though this sphere was not part of the Joint Comprehensive Plan of Action (JCPOA), a 2015 deal Iran signed with the United States, the United Kingdom, France, Germany, China, Russia and the European Union promising to end its drive toward becoming a nuclear power. The Trump Administration, claiming Tehran had not been complying with the terms of the deal – and unhappy that it had not covered missile development – pulled out last year and reinstituted harsh economic sanctions on Iran, urging the other signatories to so the same. “Europeans are not in a position to criticize Iran for issues outside the JCPOA,” a state broadcasting platform quoted Zarif saying. “The Europeans and other signatories of the JCPOA should normalize economic ties with Iran…. We will halt our commitments or will take action in accordance with their measures.” Ali Larijani, speaker of Iran’s parliament, took a tough line specifically with France, whose president, Emmanuel Macron, was quoted as telling his U.S. counterpart that they basically saw eye to eye on Iran. “The recent remarks by the French president in a meeting with Trump were shameful and inept…. Macron’s comments did not match what he has been telling our president…. in their meetings and on the phone,” Larijani told state media.