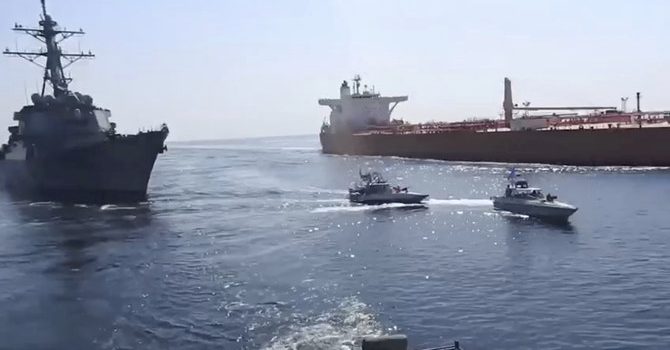 Bandar Abbas1 Gulf of Oman1 Iran26 MV Southys1 US13
DUBAI: Iran seized a Vietnamese-flagged oil tanker in the Gulf of Oman last month and still holds the vessel, two US officials told The... 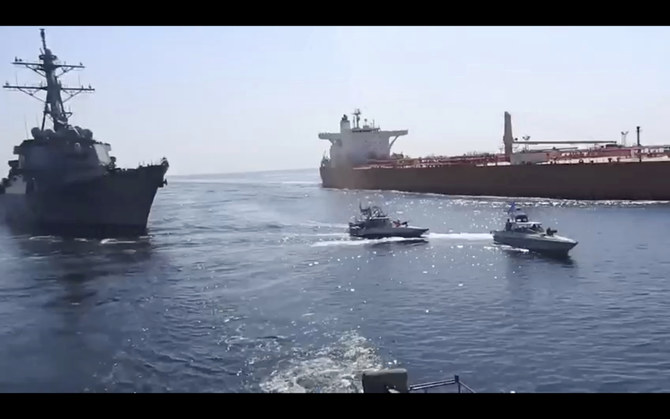 DUBAI: Iran seized a Vietnamese-flagged oil tanker in the Gulf of Oman last month and still holds the vessel, two US officials told The Associated Press on Wednesday, revealing the latest provocation in Mideast waters as tensions escalate between Iran and the United States over Tehran’s nuclear program.

Iran’s powerful paramilitary Revolutionary Guard troops took control of the MV Southys, a vessel that analysts suspect of trying to transfer sanctioned Iranian crude oil to Asia, on Oct. 24 at gunpoint. US forces had monitored the seizure, but ultimately didn’t take action as the vessel sailed into Iranian waters.

Iran celebrated their capture of the vessel in dramatic footage aired on state television, the day before the 42nd anniversary of the 1979 seizure of the US Embassy in Tehran.
Officials at the Vietnamese Embassy in Washington did not immediately respond to a request for comment. Ship-tracking data analyzed by the AP from MarineTraffic.com showed the vessel still off Iran’s southern port of Bandar Abbas on Tuesday. A satellite photo from Planet Labs Inc. also showed the vessel off Bandar Abbas in recent days.

The two US officials spoke on condition of anonymity as the information had yet to be made public amid ongoing attempts to restart talks over Iran’s tattered 2015 nuclear deal with world powers. Negotiations have stalled in Vienna since the election of hard-line President Ebrahim Raisi in June, allowing Iran to press ahead with its nuclear program and raising alarm in Western capitals. Iran’s top nuclear negotiator said last week that talks would resume in November, but didn’t provide a specific date.

The officials spoke to AP after Iranian state TV offered a series of contradictory reports about a confrontation between the Guard and the US Navy’s Mideast-based 5th Fleet. State TV sought to cast the incident as an act of American aggression against Iran in the Gulf of Oman, with the US Navy detaining a tanker carrying Iranian oil and the Guard freeing it and bringing it back to the Islamic Republic.

The US officials dismissed Iran’s version of events. Tehran also did not provide details of the ship’s name, nor any explanation of why the Navy might target it. Iran’s mission to the United Nations did not immediately respond to a request for comment.

Iranian officials heralded the ship’s impoundment as a heroic act, with Raisi lauding the Revolutionary Guard on Twitter. The country’s oil minister, Javad Owji, thanked the Guard for “rescuing the Iranian oil tanker from American pirates.”

State TV released footage showing an Iranian surveillance drone monitoring a hulking red tanker in the Gulf of Oman. Heavily armed Iranian commandos then rappelled onto the boat from a helicopter as small speedboats surrounded the vessel and an Iranian catamaran ship patrolled the waters.
The video appeared to show Iranian Guard troops pointing uncovered deck-mounted machine guns at the USS The Sullivans, an Arleigh Burke-class guided missile destroyer. Photos released by the US military show The Sullivans recently in the Arabian Sea near the Gulf of Oman.

The status and makeup of the Sothys’ crew wasn’t immediately known. A shipping database showed the vessel’s last registered owner as OPEC Petrol Transportation Co., a firm with a Hanoi address. A telephone number for the company could not immediately be found.

However, the Southys had been on the radar of United Against a Nuclear Iran, a New York-based advocacy group long suspicious of the Islamic Republic. In a letter dated Oct. 11 addressed to the Vietnam Maritime Administration, the group said its analysis of satellite photos showed the Southy received a ship-to-ship transfer of oil in June from an oil tanker called the Oman Pride.

The US Treasury identified the Oman Pride in August as being used to transport Iranian oil as part of a smuggling scheme to enrich the Guard’s expeditionary Quds Force. That Iranian oil ends up being sold into East Asia, the Treasury alleged, without identifying a specific country.
Iran’s seizure of the Southys would be the latest in a string of hijackings and explosions to roil the Gulf of Oman, which sits near the Strait of Hormuz, the narrow mouth of the Arabian Gulf through which a fifth of all traded oil passes.

The US Navy blamed Iran for a series of limpet mine attacks on vessels that damaged tankers in 2019, as well as for a fatal drone attack on an Israeli-linked oil tanker that killed two European crew members earlier this year. Just a few months ago, Iranian hijackers stormed and briefly captured a Panama-flagged asphalt tanker off the United Arab Emirates.
Tehran denies carrying out the attacks, but a wider shadow war between Iran and the West has played out in the region’s volatile waters since then-President Donald Trump withdrew the US from Iran’s nuclear deal in 2018 and imposed crushing sanctions on the country.