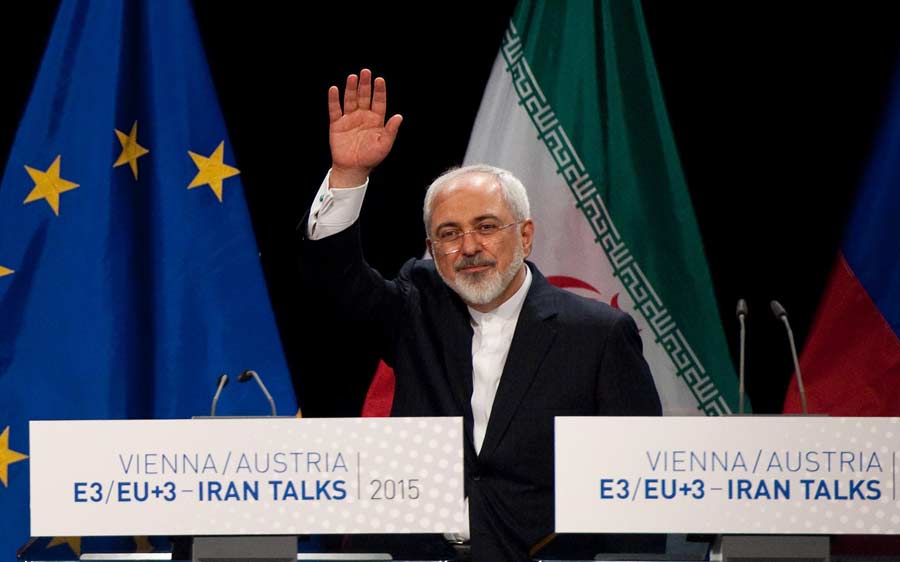 Japan’s Foreign Minister Taro Kono has called on Iran to stay committed to the nuclear agreement and not take any steps to violate it.
Iran’s Foreign Minister Mohammad Javad Zarif was in Tokyo as part of a tour of Asia. Before arriving in Japan, he made stops in China and Malaysia.
Zarif’s trek came on the heels of his surprise visit to the G7 summit in France where he met with French President Emanuel Macron and European diplomats.
Iran is seeking financial relief from crippling U.S. sanctions. In a tweet, Zarif said of his stop in Beijing that “I will present a 25-year road map to materialize our Comprehensive Strategic Partnership and actively contribute to the Belt & Road Initiative.”

Professor Mohammad Marandi, head of the American Studies Department at Tehran University, told The Media Line that “countries like China and Malaysia are very critical of America’s behavior and foreign policy and will work with Iran.
“Obviously, Iran is feeling pressure from the economic warfare which is targeting ordinary Iranians through what Trump himself admits to being brutal sanctions, and Iran definitely is looking to its friends to increase their support in order to prevent the Americans from being able to harm Iranian citizens.”
China is in the midst of an escalating trade war with the United States.
Mehdi Mahmoudi, a freelance journalist based in Tehran, told The Media Line that despite American sanctions, China has continued to purchase Iranian oil.

“China continues to buy Iranian crude and this is very important and helpful for Tehran. In return, Iran has strongly supported China against the United States, especially in the trade war and the crisis in Hong Kong.”
He noted that Zarif briefed Chinese officials on his talks with Macron, because China is one of the signatories of the 2015 nuclear accord. The Trump administration withdrew from the deal last year.
Mahmoudi said that Zarif’s visit to the three Asian countries is part of Tehran’s efforts to diversify the buyers of its oil.

“Due to restrictions on Iran oil exporting, Tehran has increased its activities to gain more oil customers and I think Malaysia is willing to help Iran against the U.S.”

Onur Erim, president of Dragoman Global, a Turkish think tank, said the current trade dispute between Beijing and Washington indirectly helps China’s relations with Iran.
“The Chinese economy is also suffering because of the trade war and we have seen dramatic slides in Asian stock markets. Cooperation and trying new trade models may be useful for both Iran and the Asian countries. For Iran, such initiatives would be life saving.”
Zarif told Chinese Foreign Minister Wang Yi that Iran and China need to join forces to counter “contempt for international law.”
Marandi said U.S. policy toward Iran and China is why both countries should further improve their relationship. “U.S. pressure on China with the trade war, and the economic war against Iran, has been an incentive for both to improve ties.”
Marandi said that Iran has a lot to offer China and other Asian countries.
“Iran has a very diverse economy. It is very advanced in high tech fields, such as nano technology, stem cell research, satellite technology and, of course, the Iranian military industry is highly developed.”
Marandi said Iran is also focusing on strengthening its domestic economy. “The government is creating an environment so that many of the goods that Iran has been importing can be produced at home. It is moving toward strengthening Iran’s indigenous capabilities and also moving to strengthen its relationships with neighboring countries.”
Marandi said that Iran’s policy is simple and clear. “The Iranians are trying to drive a wedge between Europe and the United States.”
President Donald Trump said at the G7 summit that he is prepared to meet Iranian President Hassan Rouhani. But Rouhani responded by saying there could not be a meeting until the U.S. “takes the first step” and lifts all sanctions against Iran.
Both men will be in New York for the UN General Assembly at the end of September, which could provide the stage for talks.

But despite Trump’s conciliatory remarks, Marandi said he doesn’t envision a meeting between the two leaders taking place.
“I doubt that there will be any direct negotiations between Iran and the U.S. as long as the United States is carrying out economic warfare, or, as our foreign minister called it, ‘economic terrorism,’ against Iran. There is no realistic chance for negotiations between the two sides.”