Iran Declares Protests Are Over, but the Evidence Suggests Otherwise

The Iranian authorities moved Thursday to project the appearance of normalcy after a week of violent protests over gasoline price increases, partly restoring internet... 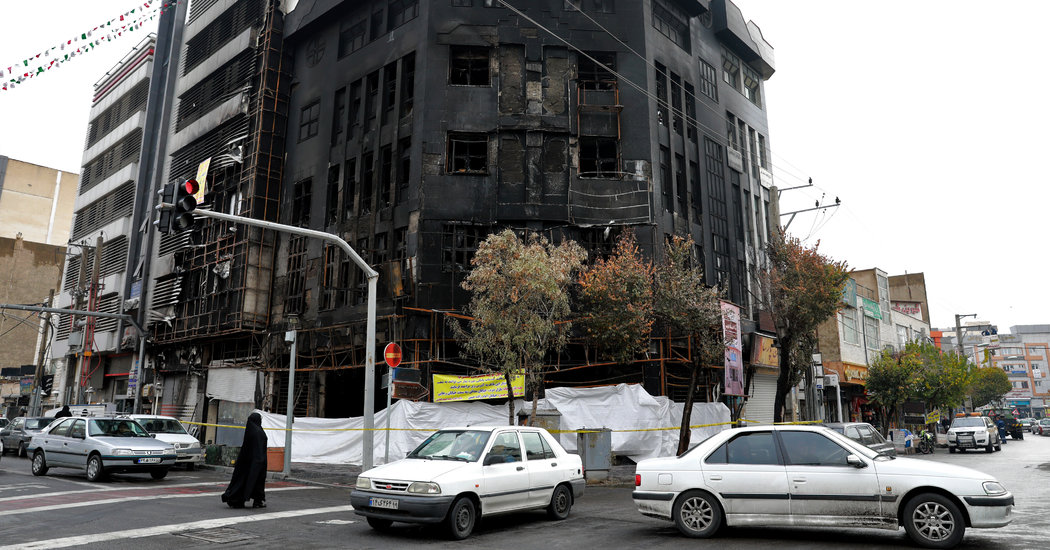 The Iranian authorities moved Thursday to project the appearance of normalcy after a week of violent protests over gasoline price increases, partly restoring internet access and decreeing that the mayhem that convulsed the country was really a foreign-backed failure.

But other developments suggested that a severe crackdown was underway in response to the street clashes, rioting and destruction that had upended life in dozens of Iranian cities and towns — and that the uprisings had not been completely crushed.

Doctors reported that hospitals were overfilled with people injured in the protests. They also said the Health Ministry had ordered all hospitals in Tehran and other cities to cancel elective surgeries because of the influx of emergency cases.

Iran’s student union said plainclothes agents of the pro-government Basij militia, hiding inside ambulances to evade restrictions on entering campuses, had seized more than 50 students at Tehran University after protests there.

The government also came in for some extraordinary criticism from the nation’s writers guild over what amounted to an internet blackout that started on Sunday in the nation of 80 million, effectively obscuring much of what was happening during the protests. NetBlocks, a firm that tracks cybersecurity, said the shutdown had disconnected almost the entire country.

“Shutting down the internet and cutting the access of Iranians and the outside world to the news is the latest tactic to crush protests without the eyes of the world on you,” the guild said Thursday in a statement posted on Telegram.

President Trump, whose sanctions are at least partly blamed for Iran’s economic travails, broke six days of silence on the protests. Iran had become so unstable, Mr. Trump wrote on Twitter, “that the regime has shut down their entire Internet System so that the Great Iranian people cannot talk about the tremendous violence taking place within the country.”

Amnesty International has said that more than 100 Iranians were killed in the protests, some by security forces using live ammunition to disperse and intimidate crowds. The government, which has portrayed the protesters as rioters and thugs inspired and paid by foreigners, has called the Amnesty report propaganda.

“Any casualty figures not confirmed by the government are speculative and unreliable, and in many cases part of a disinformation campaign waged against Iran from outside the country,” Alireza Miryousefi, a spokesman for Iran’s United Nations mission, said Wednesday in a Twitter post.

A spokesman for the Islamic Revolutionary Guards Corps, the elite force responsible for national security, said that several leaders of the unrest with dual citizenship and ties to foreign governments had been arrested. The semiofficial Fars News Agency reported that rioters had looted and burned chain stores in a number of Tehran suburbs, and that some had “received $60 for each place set on fire.” The Fars account did not specify who had supposedly provided that money.

Despite the government’s clampdown on internet connectivity and censorship of what could be officially reported, Iranians who saw or participated in the protests found workarounds to transmit video and text of what they had witnessed.

The videos and postings, although anecdotal, depicted fear, bitterness and anxiety.

Pejman Gholipour, 18, for example, went shopping Monday in the city of Karaj for a suit to wear to his brother’s wedding. On Wednesday, his family held a funeral for him in their coastal town of Langaroud, according to an Iranian journalist, Yasin Namakchian.

Mr. Gholipour had been caught up in one of the protests when security forces opened fire and he was struck. Mr. Namakchian, who is from the same city as Mr. Gholipour, announced his death on Twitter.

Not far from where Mr. Gholipour was killed, an unidentified young man’s lower leg was nearly severed by a bullet. A video showed protesters dragging him on the ground in the midst of clashes and sirens. Someone shouted “Stop, wrap his leg!” Blood oozed from his jeans as his partly severed leg dangled, according to a video shared on social media by another journalist in Iran.

President Hassan Rouhani said on Wednesday that the government had vanquished what he called foreign enemies instigating the unrest and that calm and order had been restored.

What started as relativity peaceful demonstrations over the increases shifted within days to a violent revolt against the system. As security forces were mobilized to stop them, the protesters became more brazen, suggesting a new phase in the dynamic of resistance and repression that has punctuated Iran’s history since the 1979 Islamic Revolution.

In many cities large and small, the streets look like war zones. Smoke and fire engulfed multiple buildings, banks and shops. Shattered glass and debris spread across major roads with no sign of commerce or traffic.

Three residents of Tehran reached by phone said that the affluent northern part of the city was quiet, but that unrest persisted in middle-class and working-class neighborhoods. They said the capital had the appearance of a heavy security zone, with swarms of anti-riot police on motorcycles and Special Forces lined up on nearly every major road. Plainclothes Basij militia members were also out on the streets.

“It’s definitely not normal. We are not leaving the house unless we have to and nearly all official business has come to a halt,” said Sara, a translator in Tehran who did not want her last name published. She said patients at her husband’s medical clinic had canceled and many people were reluctant to send their children to school.

The mayor of Shiraz, where clashes have been severe, said on Wednesday that transportation infrastructure in four of the city’s districts have been destroyed. The owner of a popular hypermarket, Refah, the Iranian equivalent of Walmart, said shops in three of its locations had been ransacked.

Even political figures appeared bolder in their criticism of the government. One of Iran’s most prominent political activists close to the reformist faction, Abulfazl Ghadiani, issued a statement blaming Supreme Leader Ayatollah Ali Khamenei, who has thrown his weight behind the gas increase policy and effectively shut the door to any reconsideration.

“The main and final person responsible for the blood being spilled is Mr. Khamenei. He must be held accountable,” Mr. Ghadiani said.

As news of the unrest dominated, the judiciary quietly moved to close a contentious espionage case against wildlife conservationists whose plight had gripped both Iranians and the international community. Iran’s Ministry of Intelligence had concluded that the conservationists, from the Persian Wildlife Heritage Foundation, were not spies. But the Revolutionary Guards, who operate a parallel intelligence bureaucracy, prosecuted the charges anyway.

One defendant, Morad Tahbaz, an Iranian American from Connecticut, was sentenced to 10 years in prison, and a co-defendant, Niloufar Bayani, a former project consultant and scientist for the United Nations environment agency, was sentenced to eight. They were both convicted by a Revolutionary Court for collaborating “with an enemy state.” The authorities also seized Ms. Bayani’s income from her United Nations employment.

Four other co-defendants received sentences of between six and eight years. Two remaining co-defendants still await their verdict, according to an account posted by the Center for Human Rights in Iran.