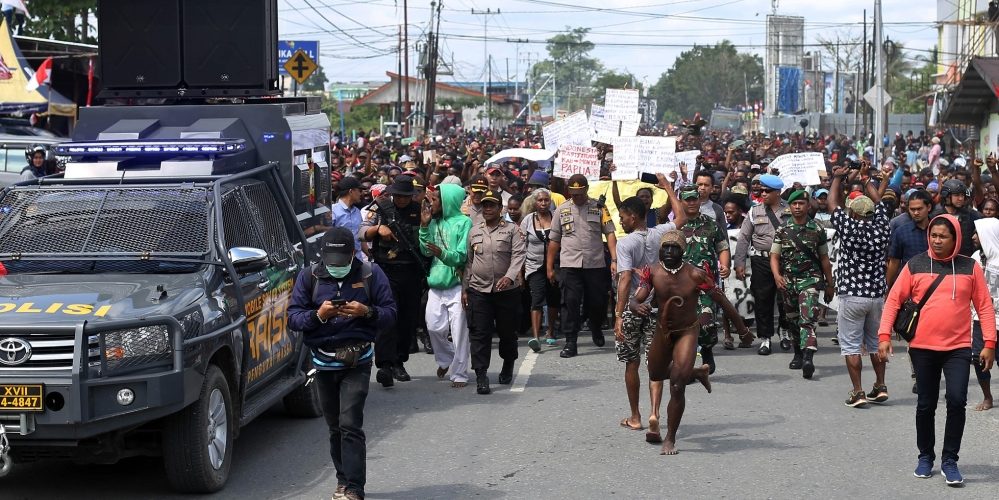 Jakarta, Indonesia – Indonesia has blocked internet access in West Papua, a move that followed the government deployment of additional military and police personnel to the region to help to quell ongoing protests and secure vital public facilities.

News of the internet shutdown comes as angry demonstrations continue to break out on Thursday in West Papua province’s city of Sorong and the Fakfak regency, according to Al Jazeera sources. A number of protesters have also started to gather in the capital, Jakarta.

Indonesia’s security minister, Wiranto, and the country’s police chief, General Tito Karnavian are heading to the region on Thursday to oversee the government operation, according to reports.

Indonesia’s information ministry said the decision to “temporarily block” internet communication starting on Wednesday is meant “to accelerate the process of restoring the security and order situation in Papua and the surrounding areas.”

The order stands “until the situation in Papua returned to being conducive and normal,” according to the Ministry of Communication and Information Technology’s official Website.

Information Minister Rudiantara also confirmed the shutdown in a message to Al Jazeera on Thursday.

But he said “it is only data”, adding that people “can still make and receive calls, and send and receive text messages.”

Earlier, Rudiantara told Al Jazeera that authorities had slowed down the internet in West Papua “to filter information and prevent the spread of rumours during the protests.”

As this developed, the state-owned Antara news agency also reported late on Wednesday that police officers have arrested at least 34 people in Timika, a regency in Papua province. 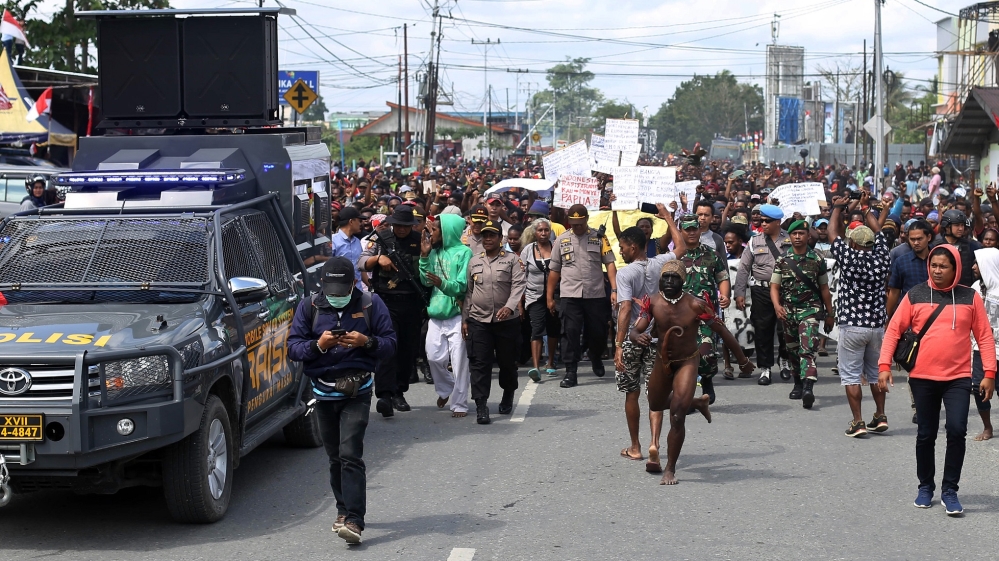 Meanwhile, reaction to the internet shutdown was swift on social media.

The Southeast Asia Freedom of Expression Network (SAFEnet) is using the hashtag ‘keep it on’ to press the government to lift the ban on the internet.

Damar Juniarto, executive director of SAFEnet, told Al Jazeera that the Indonesian government could be violating the country’s own laws.

“It is preventing people from doing their jobs. This is a backward step in a democracy and a serious violation,” he said.

Jakarta today, protester: “We are not red and white.” pic.twitter.com/i4vff5Q2fj

Yan Warinussy, a West Papuan in Manokwari, confirmed to Al Jazeera that he can only access the internet from a private wi-fi service in his house and office.

“But my children who use Android to study now they cannot access any internet. They really need it,” he said.

Local journalists in West Papua also told Al Jazeera that they have encountered difficulty in transmitting news from Sorong and Fakfak, as well as other remote parts of the region.

“There was a big event when the military and police officer tried to negotiate with the demonstrators, but on the way to the place, the West Papuan threw rocks at them. One of the police officers was injured,” according to Arnold Kapisa, who reports for Tabloid Jubi from Manokwari, a leading newspaper in the region.

“We cannot get any photo and video right away and report to our office.”

On Wednesday, demonstrators in Fakfak reportedly set the public market on fire. A day earlier on Tuesday, the airport in Sorong was also reportedly attacked by protesters forcing airlines to cancel flights.

Angela Flassy, chief editor of Tabloid Jubi, told Al Jazeera by phone that since Monday, internet in Jayapura, the capital and largest city in Papua province, has been blocked.

“We are having a difficult time to coordinate, to find news, to send articles, and verify any news from the ground,” she added.

All the journalists in the region now rely on private wi-fi networks, which are more expensive.

Petition to the UN

Meanwhile, Veronica Koman, a human rights lawyer who focuses on West Papua issues, told Al Jazeera that her team is lodging a complaint to the UN Special Rapporteur on Freedom Expression, to address the internet blockade.

Indonesian President Joko Widodo, who won 78 percent vote in the region during the recent presidential election, has sought to ease tensions by appealing to all Indonesians to forgive.

Despite its natural wealth, West Papua remains the poorest region in Indonesia. The world’s largest gold mine, owned by the US company Freeport McMoran, is located in West Papua.

West Papua region shares the Papua group of islands with the independent state of Papua New Guinea. It was a Dutch colony until the early 1960s when Indonesia took it over; becoming part of the country in a controversial 1969 referendum, where only some 1,000 people were allowed to vote on behalf of 800,000 other Papuans.

Since then, pro-independence movement has been aroused in the region, using morning star flag as their symbol of resistance.

In December, an attack by independence fighters killed at least 17 people and triggered military crackdown that caused 35,000 civilians to flee their homes.