SRIHARIKOTA, INDIA (AFP) – India will step up the international space race on Monday (July 15) when it launches a low-cost mission to become... 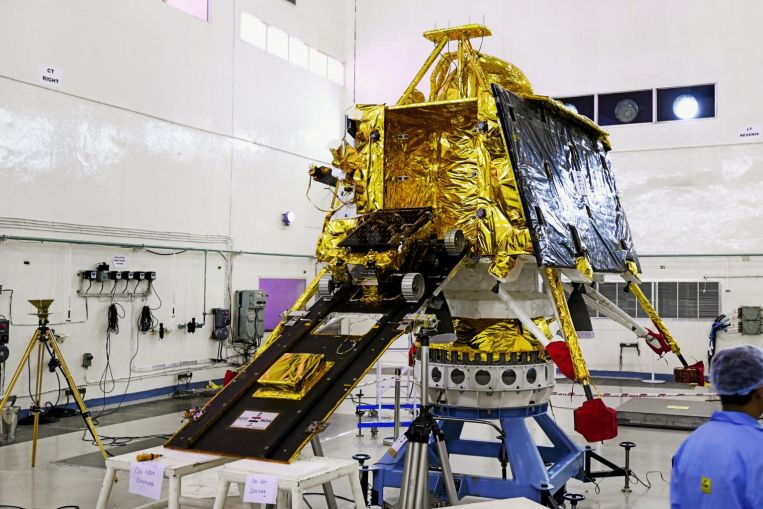 SRIHARIKOTA, INDIA (AFP) – India will step up the international space race on Monday (July 15) when it launches a low-cost mission to become only the fourth country to land a probe on the moon.

Just five days before the 50th anniversary of man’s first lunar landing, Chandrayaan-2 – or Moon Chariot 2 – will blast off from a tropical island off Andhra Pradesh state after a decade-long build-up.

The mission will also highlight how far space travel has advanced since Neil Armstrong’s giant leap for mankind during the Apollo 11 mission.

India has spent about US$140 million (S$190 million) to get Chandrayaan-2 ready for the 384,400 kilometres trip from the Satish Dhawan Space Centre to the scheduled landing on the lunar South Pole on Sept 6.

The United States spent about US$25 billion – the equivalent of more than US$100 billion in current prices – on 15 Apollo missions, including the six that put Armstrong and other astronauts on the moon.

China landed its Chang’e 4 lunar craft in January, and spent US$8.4 billion on its entire space programme in 2017, according to international Organisation for Economic Cooperation and Development figures.

And Russia – the first country to land an unmanned moon rocket in 1966 – spent more than US$20 billion at today’s values on lunar missions in the 1960s and 70s.

Almost the entire Chandrayaan-2’s orbiter, lander and rover have been designed and made in India.

India will use its most powerful rocket launcher, GSLV Mk III, to carry the 2.4 tonne orbiter, which has a mission life of about a year.

The spacecraft will carry the 1.4 tonne lander Vikram – which in turn will take the 27-kilogramme rover Pragyan – to a high plain between two craters on the lunar South Pole.

Indian Space Research Organisation (ISRO) chief K. Sivan said Vikram’s 15-minute final descent “will be the most terrifying moments as we have never undertaken such a complex mission”.

The solar-powered rover can travel up to 500 metres and is expected to work for one lunar day, the equivalent of 14 Earth days.

Sivan said the probe will be looking for signs of water and “a fossil record of the early solar system”.

Despite the relatively small budget, the mission does raise questions about how funds are allocated when the country is still battling hunger and poverty.

But national pride is at stake: Prime Minister Narendra Modi has vowed to send a manned mission into orbit by 2022.

Most experts say the geo-strategic stakes are small – but that India’s low-cost model could win commercial satellite and orbiting deals.

“The fundamental question that we should ask ourselves in this context is not whether India should undertake such ambitious space ventures, but whether India can afford to ignore it,” said K. Kasturirangan, a former ISRO chief.

India has to aim to be a leader in space, he added.

Rajeswari Pillai Rajagopalan, head of space policy at the Observer Research Foundation, a New Delhi think tank, said Chandrayaan-2 will enhance the nation’s reputation “at a time when the global and particularly, the Asian space programmes are becoming increasingly competitive”.

Amitabha Ghosh, a scientist for NASA’s Rover mission to Mars, said the benefits of Chandrayaan-2 are huge, compared to its cost.

“A spacecraft mission of the complexity of Chandrayaan-2 conveys a message that India is capable of delivering on difficult technology development endeavours,” said Ghosh.

However, some experts say anyone looking for a cheap ticket to space should think of the comfort on low-cost plane rides closer to Earth.

Although both launched in 2013, Maven is estimated to have cost 10 times more, but India’s Mangalyaan was only designed to last about a year.

“The US mission was required to last two years. That’s a big difference in cost,” said Hubbard. And Mangalyaan’s payload was 15 kg, while Maven could carry 65 kg with more sophisticated instruments.

“So you get what you pay for,” concluded Hubbard.